The campaign, ‘Me. Him. Us.’ focuses not only on increasing testing among gay and bisexual men, but also on increasing the representation of BAME gay and bisexual men in public health campaigns. With his work produced at LCC focusing on healthcare and having previously volunteered with Stonewall, Sho became involved with GMFA via his lecturer Sian Cook. The posters that Sho worked on appeared around South London and the campaign was nominated for Diversity in Media Marketing, Campaign of the Year Award 2018.

We spoke to Sho about the campaign, his design practice and his time at LCC… 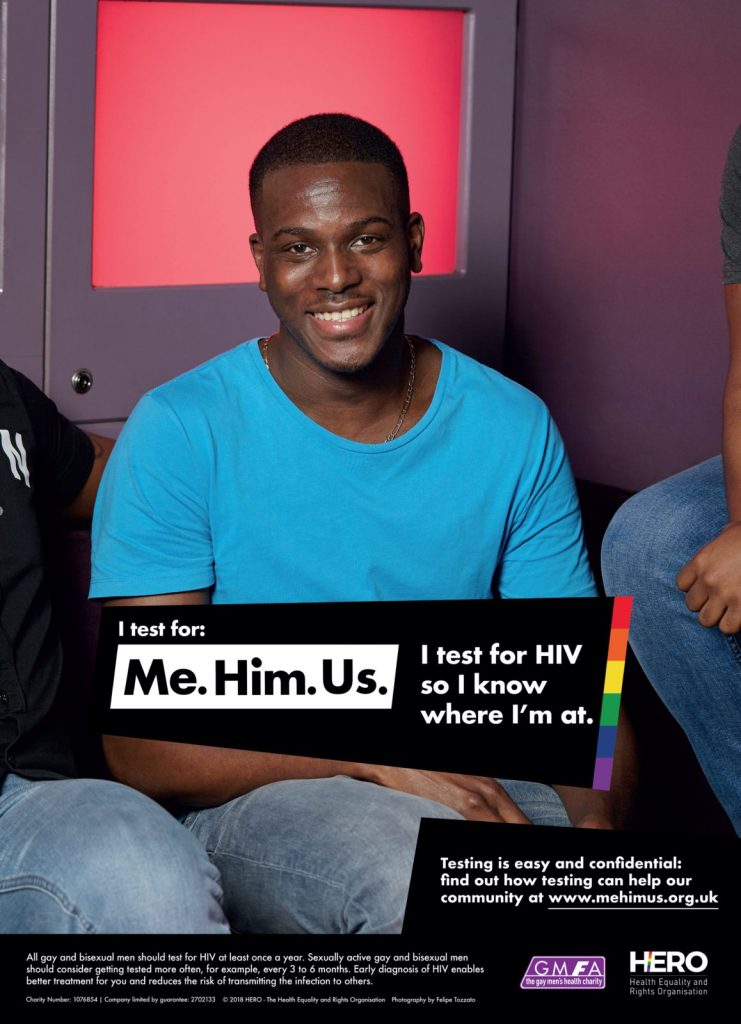 Can you tell us a little about the campaign?

The campaign is about raising awareness of HIV testing amongst young black gay men – which is the one most HIV susceptible demographic in London. We have designed our campaign in a progressive manner to represent and resonates with our audience, and because of this, the feedback has been excellent especially from the media.

Why is the campaign important?

This is an important campaign as at its centre is the idea that we need to get the representation of one underrepresented target audience right. By doing this we have been able to create a culture of support amongst the community, on not only HIV, but I also believe in STIs in general and the interconnected subject of mental health.

How did you become involved with GMFA?

I found out that Sian Cook (Senior Lecturer of BA (Hons) Graphic and Media Design) was a board member of GMFA when she did a presentation about her work throughout her career. Not only had I enjoyed the support from her as my mentor at the time but I thought this was a great opportunity for progression from the volunteering work I was already doing for Stonewall (London based LGBT+ charity). 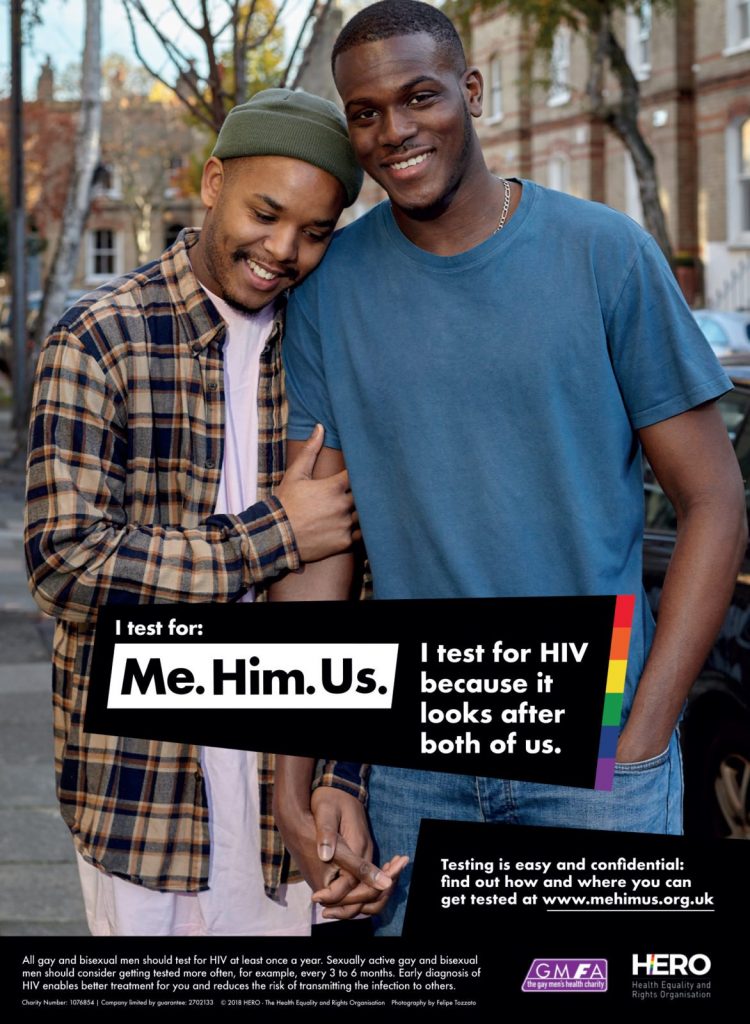 What was the process for the concept behind the campaign?

We listened closely to our audience and developed work that both resonated and represented them.  The branding visuals are bold – we wanted to emphasise that testing for HIV matters not just for you, but because you care about the health of your partner(s) and your friends.

How did you end up focusing your work on health?

At LCC you are taught to produce creative projects that do good for the world and I focused on health, as I believe that healthcare is a universal human right. From a personal perspective, it felt good in my human experience to be able to contribute to the well-being of others. It was certainly enjoyable because the seriousness of the brief allowed my creativity to thrive and that creative moment is what I love about being a designer. Healthcare was my conclusion to the teaching of LCC – this is just one way graphic designers can bring the change for a better world.

How do you feel your time at LCC helped you prepare for this work?

The key to my projects, and in any social issue campaigns, is creating a platform for honest and open conversation. LCC was certainly one of the places where this was possible – surrounded by young people who were very aware of current affairs who had the talent to exhibit them in a creative manner. Through repeated discussions and seminars I developed the natural confidence and curiosity to explore tough issues in society. 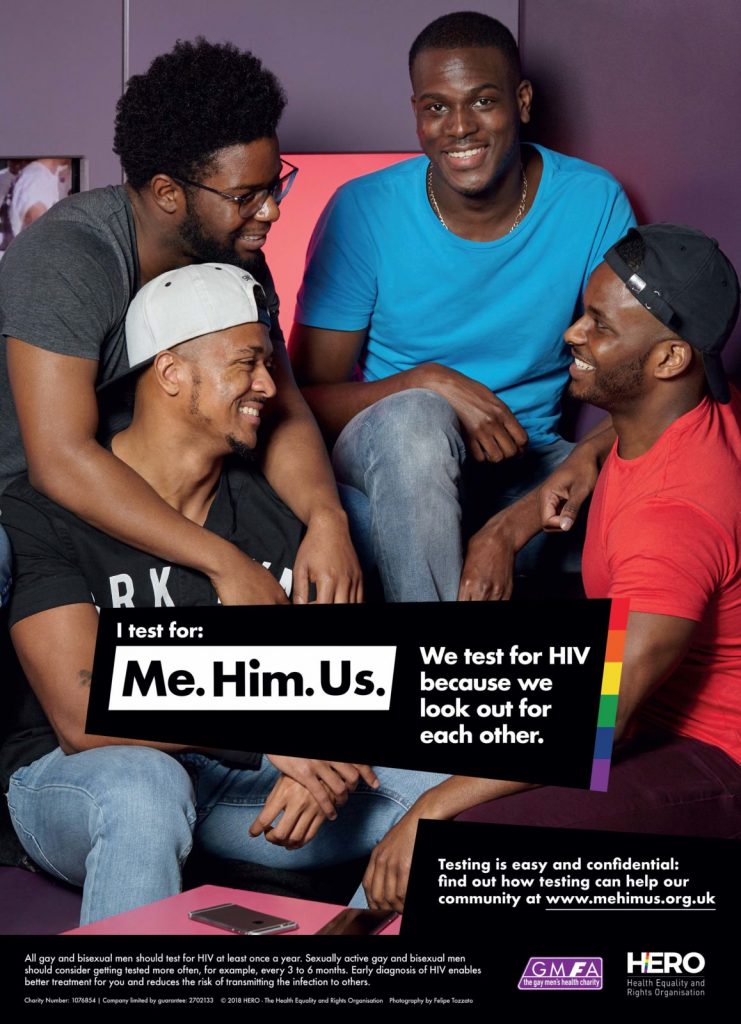 What advice would you give to LCC Graphic and Media Design students who are about to graduate?

Find your mission in life – and you can do this by exploring opportunities as far and wide as you can. There are a lot of fields you can get into with expertise in visual communication. My mission is to give power back to the people – I got to this by being exposed to the inequalities in our society that are institutionalised. The Him Me Us campaign is just one of the ways I feel I worked towards this.

I have developed my speciality in healthcare as a designer and that is always going to be my strength –but I am now open to focusing on design as an ideology and through the exploration, I can feed myself all the curiosity I have about the world.

Find out more about the Me. Him. Us. campaign and GMFA.