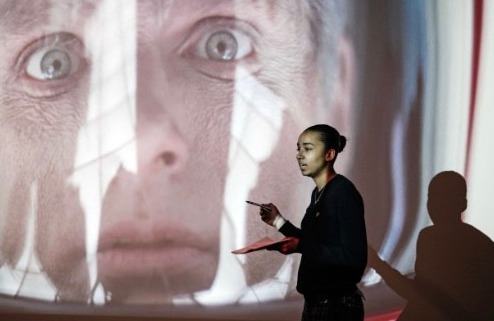 Ella is a first year student on BA (Hons) Film and Screen Studies at London College of Communication.

Why did you choose to study this course and why London College of Communication?

I chose to study this course because I am inspired by Godard’s film and writings. Before he was a filmmaker he was a film critic. He made me realise the importance of being able to analyse and criticise film. The film and screen course enables me to hone and develop such skills, which I hope will allow me to become a brilliant filmmaker and critic, like Godard. I chose to study at LCC due to its links to the film industry, location and the quality of the teaching. To me it would be absurd to not study film in London considering it is the place with the most film and screen based opportunities in the UK. I also think it is important to be taught by industry professionals, a multitude of the film staff have experience and contacts in the industry and can therefore give a better understanding and insight to students to prepare for life in the film industry post University. When inquiring into courses at other establishments, before coming to LCC, I realised a lot of these institutions did not have industry connections, which is key when studying to work in such a competitive field.

What was the highlight of your first term at LCC?

My highlight of the first term was learning about archiving. My class and I were fortunate to go to the Stanley Kubrick archives, situated at LCC, as well as go to the Imperial War Museum to learn about archiving and how Peter Jackson’s Word War One documentary was made. This was my highlight as the two trips made me far less ignorant. Prior to the two trips I did not understand the importance and difficulties of archiving, nor did I realise how subjective it was.

Have you had any opportunities to engage with industry whilst on the course?

I have had the opportunity to go to the Berlin Film Festival, courtesy of the university, and meet and talk with industry professionals across the world. The film public programme gave me the chance to collaborate with film enthusiasts, academics and up and coming filmmakers.

What important piece of advice would you give to students thinking of studying this course?

Understand that this course is not a practical course. The purpose of the course is to help students be able to analyse film and screen based media. As well as learn how to curate and learn film history.

What are your career aspirations? Where would you like to be in five years' time?

I hope to work in the industry, as a filmmaker and critic and hopefully be able to open my own Cinema with a Restaurant.

How do you find being a student in London? What would your dream day consist of?

Studying in London opens doors that would be unimaginable if you lived in another part of the country. I find it very enjoyable living in London, as there are so many amazing spaces to film. I also love studying in London because the student body is a reflection of the city, it is very diverse and so I am constantly learning more about different cultures and traditions. Walking from London Bridge to Tower Bridge along the Southbank is definitely my dream day, due to the scenery, food and energy of the area.