Victoria Ceridono, beauty editor of Vogue Brasil and founder of Dia de Beauté, the global independent blog and YouTube channel, came to London College of Communication on Friday 17 January to talk about her life as a busy editor in beauty features and blogging, and about the constant juggle between her two roles. MA Publishing student Cristiana Rodrigues reports.

The fashion trade bible in the USA, Women’s Wear Daily (WWD), includes Victoria as one of the most influential rising stars who engages online beauty communities. She has been blogging since 2007 and, three years later at the age of 25, she became a full-time editor with Vogue Brasil. 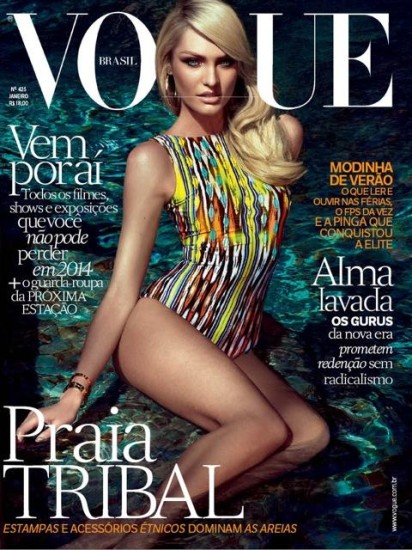 During her visit to LCC, she described how her job requires her to sample and test as many different beauty products as possible. She then writes about them like a fan, independent of commercial pressures from PRs. This could perhaps be the reason for her dual success as a magazine features editor and blogger.

While telling her inspiring story, Victoria highlighted some curious life events, such as discovering that none of her teachers at journalism school believed that she wanted to pursue a career writing about beauty.

“Back in those days, everyone would think of you as a weirdo just because of your red lipstick. None of my teachers took my word for it”. The lesson about having belief in your own creative instincts was not lost on the LCC students.

Victoria talked about some of the peculiarities of the Brazilian magazine publishing market, mentioning that government regulation there demands that the ratio of features to ads is much higher. She said:

“One small Vogue Brasil has more beauty features than one big Vogue in other parts of the world”.

She also mentioned the peculiar editorial pressures that magazines in emerging countries, such as Vogue Brasil and Turkey as Condé Nast licensees, have to comply with, whilst retaining their own cultural presence and voice.

Since relocating to London, Victoria has cut back a bit on her day to day work with Vogue Brasil. She concluded that she may now have more time to devote to her blog, finding new revenue streams and planning to expand in Brazil and beyond.