The documentary film The Man Who Shot Tutankhamun, produced and directed by BA (Hons) Film and Television Senior Lecturer Patrick McGrady, was recently shown on BBC4, and is available on iPlayer until Sunday 2 April.

Presented by Margaret Mountford, the hour-long documentary tells the story of British photographer Harry Burton, whose images of the Tutankhamun excavation in Egypt created a global sensation in the 1920s. We caught up with Patrick to find out more.

How did this project come about?

The film was developed by me through my company, Wavelength Films. We specialise in documentaries about the arts and history, so the story of Harry Burton was a natural fit for us – he is the man whose extraordinary photographs of Howard Carter’s Tutankhamun excavation in the 1920s helped turn the discovery into a global sensation. If it wasn’t for Burton’s artistry, Tutankhamun would not be as famous as he is today.

How much did you know about the work of Harry Burton before starting work on the film?

Very little. Like most people interested in the story of Tutankhamun, I must have seen Burton’s photographs many times – they are reproduced on TV and in the media all the time. It was only when I stopped to think about who had taken them, and how he must have grappled with the challenges of new photographic techniques in the challenging terrain of the Egyptian desert that I realised there was a great untold story to reveal. 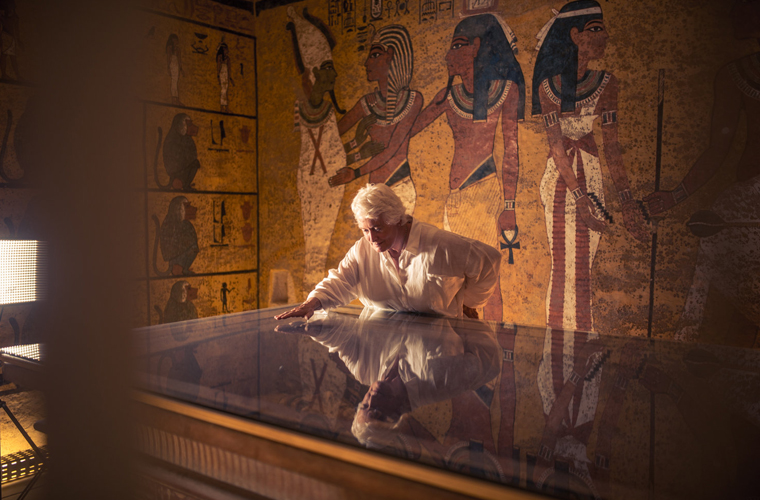 Why were his images so influential?

First and foremost because they are such brilliant photographs: they record every stage of the excavation, and give an incredibly detailed insight into individual artefacts that were buried with the Pharaoh, so they have a great value to archaeologists and other researchers. But because Burton also depicted the archaeologists at work, he helped give the story a human dimension too: they bring to life the drama and intrigue of archaeological discovery and helped create the Indiana Jones image of the archaeologist as hero and adventurer that is still so resonant today.

What were the particular challenges during production, and how did you overcome them?

Egypt and the Valley of the Kings are amazing places to work, but the heat and desert terrain make filming a physical challenge as well as a creative one. We were keen to carry out some hands-on experiments involving a present-day photographer, Harry Cory Wright, testing out historic cameras and techniques in the locations where Burton worked in the 1920s. Burton set up his darkroom in an ancient tomb close to the site of the Tutankhamun discovery. We wanted to do the same, so had to carry out long negotiations with the authorities in Egypt to get access to the site. In the end they agreed so we had the unique experience of creating our own photographic images in the spooky setting of an ancient Egyptian tomb.

How do you think your professional experience most benefits your students here?

My work as a practising director and producer informs all aspects of my teaching. It means I can give students an up-to-date insight into the way the film and TV industry operates – how programmes are developed and commissioned, how they are funded and how they are made.

Amd finally, what are you working on next?

Wavelength has several new documentary projects in development and I’m also writing a screenplay based on a true historical story.