The Refugee Journalism Project supports refugee and exiled journalists to re-start their careers in the UK. Vivienne Francis, Course Leader for BA (Hons) Journalism, has played a key role in setting up the project.

The programme is aimed at journalists who arrived in the UK with an impressive range of skills – many had been editors, correspondents and producers in their own countries – but they faced significant barriers when they attempted to continue their journalism.

During the year-long project participants were offered a range of workshops, mentoring sessions and placements. The core aims were to help refugee journalists become better connected within the UK industry, increase their confidence, update their journalistic skills and encourage more of their voices within the media to help address the mainstream bias on migrant issues.

The project is a collaboration between London College of Communication and the Migrants Resource Centre. The work is funded by the Esmée Fairbairn Foundation.

We spoke to Vivienne to find out more about the project. Can you tell us about the project and how LCC became involved?

The idea for this project emerged a couple of years ago while I was doing some voluntary media work with refugees. We were coming across experienced workers who were having difficulty re-establishing their careers in the UK. The one-off media projects provided some support, but we wanted to go further by devising something that could have a more lasting impact.

In partnership with an organisation called the Migrants Resource Centre, we developed The Refugee Journalism Project. Through mentoring, journalism workshops and internships, we seek to help refugee and exiled journalists build up their network of industry contacts, update their skills and get their voices into the mainstream.

Our participants have been recruited from Syria, Sudan, Eritrea, Afghanistan, Iraq, Iran, Cuban, Pakistan, Bangladesh and the Yemen. All have successfully been through the asylum process and have refugee status.

Who are some of the people who have volunteered their time, and what sort of activities are taking place as part of the programme?

One of the central features of the project is the pairing of the refugees with established journalists and media professionals. The lack of access to a network has been frequently cited as a barrier to their progress. These volunteer mentors include the Guardian’s Patrick Kingsley, who was named foreign affairs journalist of the year at the British Press Awards, and Neil Arun, who was nominated for a European Press Prize for his work in the Balkans and Iraq.

Other mentors have worked for BBC, CNN, Vice, Channel 4 News, The Telegraph, New Statesman, Sky News, The Times, The Economist and Vanity Fair. The mentors tailor their guidance according to the mentees’ needs – some are working on pitches to take to commissioning editors for radio documentaries, investigations or feature articles, others are spending the time developing their CVs and career planning. Each month the participants also come to LCC to participate in workshops on a range of topics like data journalism, feature writing, podcasting, law and ethics. We are also involving them at events with other media organisations – for example, Frontline Club and the Centre for Investigative Journalism.

A handful of journalism undergraduates at LCC have also volunteered to work alongside the refugee journalists – supporting the project website and filming activities. This enables the students to gain a more transcultural awareness of journalism, and helps them to develop their interpersonal skills.

This process is all about the sharing of knowledge. What are you hoping will be taken away from this programme by its various participants and contributors?

There are a number of layers to our expectations for the project. From a journalistic perspective, we hope to help change the narrative around refugees and migrants. For those who are ‘work ready’, we want them to be able to successfully compete for paid work. For example, two participants are currently interning at Airwars – a NGO that monitors civilian deaths from drone strikes. They’ve been invited to apply for a paid researcher post within the organisation.

But the project is not just about finding them work and developing their journalism skills. For some, there are more fundamental barriers that need to be tackled. The trauma of the last few years has left some in need of emotional healing. Others have complex challenges around housing. So the project is also about building and offering practical support, rebuilding confidence and reducing feelings of isolation. Ultimately, it’s also about supporting their broader integration into the UK. We want to help them thrive and resettle their lives in their new communities. 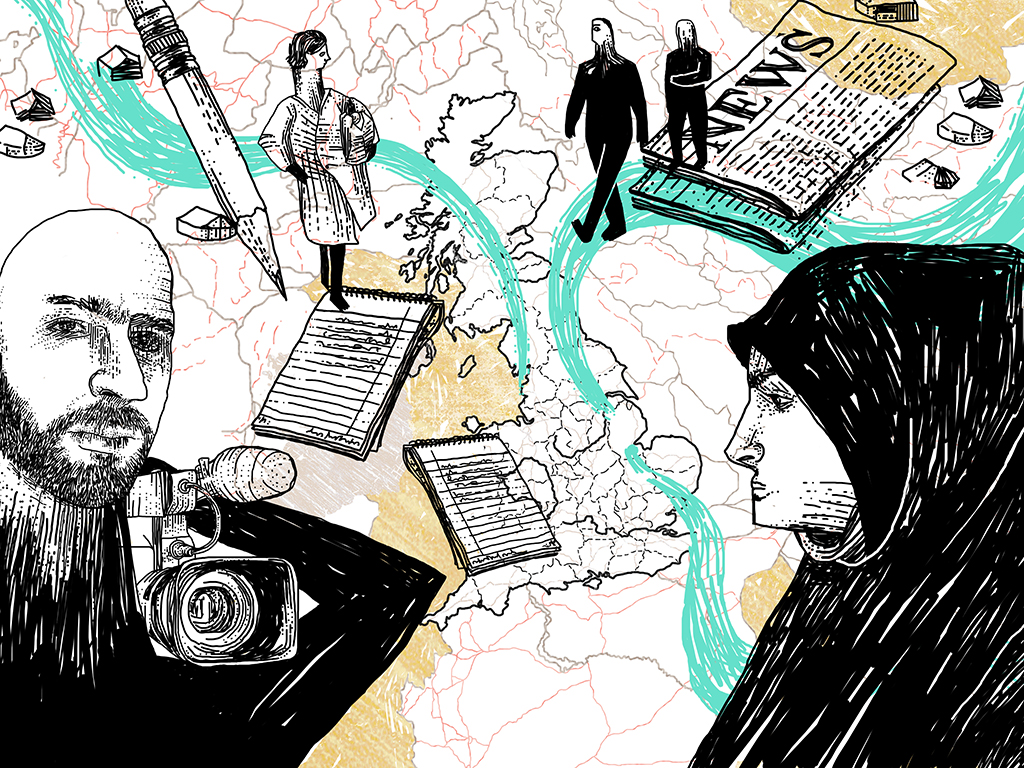 Why is it important that programmes like this exist, and are there any plans to expand and develop it?

The Esmée Fairbairn Foundation has funded us for one year. As a core team of two, we have to be realistic about what we can achieve in that time. We’ve had some really positive feedback, and organisations like the UN’s refugee agency and the Refugee Council have given us words of encouragement.

We originally aimed to work with 20 participants, but we ended up with 28 and others are still contacting us requesting to join, so that does suggest that the demand is there. Longer term, we hope to continue and grow the project by attracting more funding and partnerships. We also hope to be able to contribute to the wider policy discussions around migration.

The refugee crisis is not disappearing anytime soon, so it’s important that we think about how these new arrivals rebuild their lives. Many of them have important contributions to make to the UK, but just need a little bit of support to achieve them.

Read Vivienne’s piece in Artefact Magazine about the project

Keep up to date with news from The Refugee Journalism Project

Find out about BA (Hons) Journalism