Intensive and specialised, MA Sound Arts enables graduates to develop a conceptual and contextual understanding of sound arts practice and theory. This year’s show, LCC Postgraduate Shows 2018: Show 2, 5th – 8th December 2018, will bring you a mesmerising encounter with works that enquire into the relationships between sound and the world around us, touching on the political, environmental, architectural and musical. The work takes place in and around the unusual acoustic and visual space of the Dilston Grove Gallery, the first poured-concrete church in the UK.

‘Consider them both, the sea and the land; and do you not find a strange analogy to something in yourself?” — Herman Melville. Technical developments transform humans from members of nature to an ecological coloniser. This group of people are known as ‘industrial humans’. The film is consisted of several true industrial human stories from all over the world, and mainly focused on framing perceptions through the audio-visual methods of slow-cinema, contact mic and inner monologue, which shapes how artists and their audiences perceive the environment.’

‘REAL, but not TRUE’

‘This body of work is about sound with a view to re-create an ancient Chinese stringed instrument ‘Guqin’ as electronic, and in an interactive way, in a critical, contemporary situation. The intention is to destabilise of the ancient instrument to explore the sound and music generated on Guqin and to translate the analogy concept between the instability of sound and the CHI (life force) from the known Chinese philosophical concept. The project also explores the unsettling of the relationship between sound and vision.’

‘Endless ft. Stone is work that combines deep listening and the sound of stones. The role of both the artist and audience is to trigger the sounds with their actions. Featuring Sending and Receiving, Sound and Silence and Multi-Dimension listening, the work aims to give the audience the opportunity to listen to the sounds of stones deeply, even though sound is not loud enough to be heard; or the sounds come from different directions and resources.’ 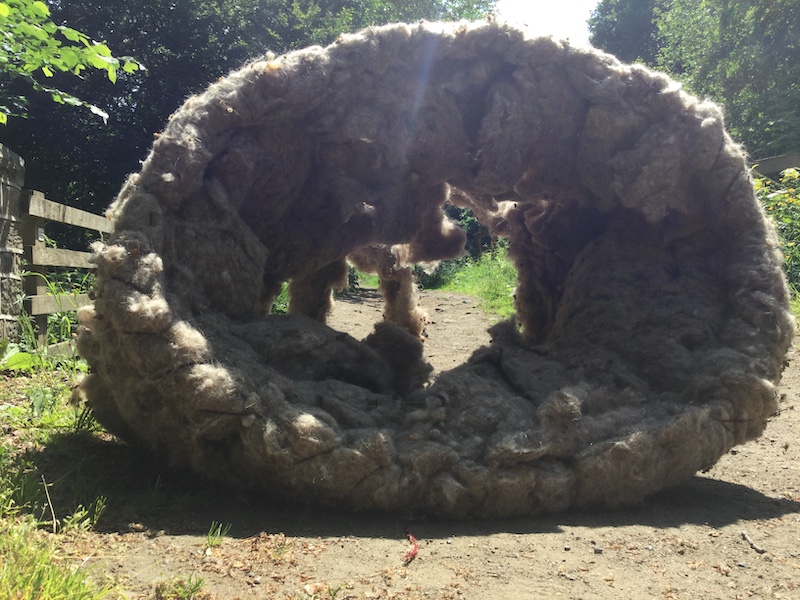 ‘Can a non-sounding object take on the role of a recording device? A sculpture constructed of wool stitched to a steel wire frame is displayed alongside footage of the work affecting the landscape in the artists hometown of Bradford. Felt (2018) is a body of work comprising site-specific sculpture, film and audio documentation. The audio is taken from sounds recorded inside the sculpture, while the film focuses on the exterior. Felt reflects the silencing of wool factories, and of the tightly knit communities that served them, amid mass closures during twentieth century. The work addresses the impact on Bradford’s soundscape by visiting local sites, absorbing the sounds and sparking conversations around local oral histories.’