Review // Something Happened On The Way From Mars, Futuro House, CSM

LCC Graduate School Assistant and MA Journalism student Naomi Rea visited Central Saint Martins earlier this term to experience Something Happened On The Way From Mars at Futuro House. Here’s her review of the project.

I’m led onto the terrace of Central Saint Martins by Pete Smithson, where I perform a comic double take because there, before my very eyes, sits a mint green spaceship.

Futuro House is exactly what you’d imagine a spaceship to look like: a smooth ellipse perched on four concrete piers that prop up a steel ‘egg cup’ onto which the craft is perched, with the door flipped open to reveal steps leading into it. In my mind’s eye, I see the puff of dry ice and hear the accompanying hydraulic hiss familiar to me from science fiction films. 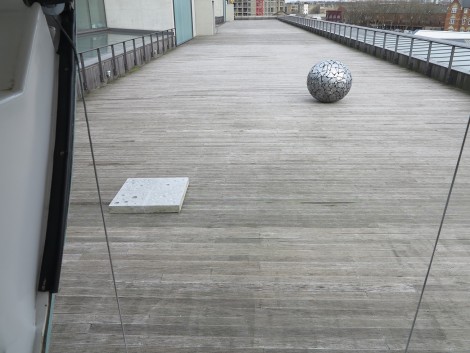 Futuro House was designed by Finnish architect Matti Suoronnen in the 1960s, a time when excitement about space exploration was at its zenith. It is one of about 60 houses launched in the same week in 1969 that man set foot on the moon.

This particular one was found in South Africa and purchased and restored by artist Craig Barnes in 2013. It landed on the terrace of CSM’s King’s Cross campus in September 2015 and will be there for a year.

Professor Jeremy Till, Head of CSM, sees it as a symbol of optimism and speculation, and has said: “We see the loan of the Futuro House to CSM as an opportunity for the College community to gather slivers of what the future might hold.”

Right now it’s playing host to Something Happened On The Way From Mars, which Pete Smithson, technical coordinator and curator, explains is “a collaboration between technical and academic staff as well as students (both undergraduate and postgraduate) and support office staff.” 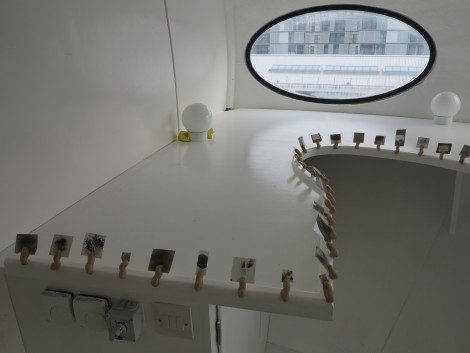 The exhibition is a response to Futuro House and what Smithson imagines to be one possible future: Earth has been abandoned for Mars after a catastrophic natural disaster (possibly linked to climate change) and in 2116 an exploratory expedition sets out to see if the Earth has sufficiently recovered for a return. However, on waking from hypersleep, the crew realise that “something happened on the way from Mars”.

Now, as to what that ‘something’ might be, I’ll let you speculate if you too have checked it out. Smithson has one idea and I have others myself, but he believes that “the people looking at art should make up their own minds about what it means”, and that “we shouldn’t prescribe any one interpretation.” 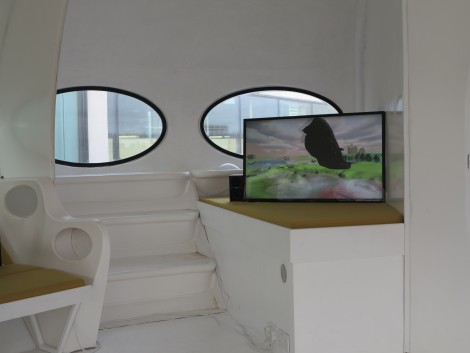 For me, the setting of Futuro House provided a framework for interpreting the artworks, as it embodies a collision of past and future. On the one hand, it’s a vision of the future but on the other, its design evokes nostalgia for the past. Specifically, nostalgia for the naïve optimism the 1960s had about human destiny that could imagine the structure used as a prefabricated mobile home for holidays to Mars.

In that respect I find the choice to pin a date (2116) to the vision interesting because it’s revisiting that optimism about space exploration and the potential colonisation of our solar system, despite the fact that what we currently know about Mars suggests that it would be an inhospitable environment.

My impression is informed by the great science fiction films of the 20th century and how we, in 2016, perceive the dream of 2001 Stanley Kubrick and Arthur C. Clarke curated in 1968, or Ridley Scott’s proposition that 2019 would see Blade Runners chasing replicants in hover cars.

Smithson is aware of these films; indeed, curled under one of the seats is a ginger ship’s cat, which he informs me is an homage to Jonesey from Ridley Scott’s Alien (1979). He knows that these films now seem ludicrous in their overestimation of the pace of scientific progress; he blushes when he suggests to me that the future the exhibition depicts is possible. 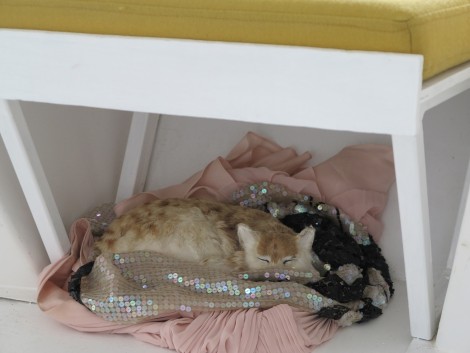 One of the screens inside Futuro explores a fantastical landscape that, for me, evoked the way that video games allow for an immersive experience of imaginary realms. Another, made by Callum Pepper, houses an elliptical bubble of static on a black background, while it plays snippets of JFK’s 1962 “We choose to go to the moon” speech, which, again, takes us backwards to a forward-looking moment in human history.

Alex Schady’s film This Orbit 2015 also does this: woven between scenes of the moon and a floating ping pong ball is footage of an empty supermarket, an image which recalls the mistakes of our past—I’m thinking here of the abandoned buildings of Pripyat after Chernobyl—as well as imagining a possible future. This one is also reminiscent of that dramatic final sequence in 2001: A Space Odyssey.

What I’m getting at here is that no vision of the future is complete without an understanding of our past. Today, we might be sceptical about these ideas, but who knows what tomorrow might bring?

Perhaps JFK put it best in that same speech when he said “the vast stretches of the unknown and the unanswered and the unfinished still far outstrip our collective comprehension”. So who are we to say what is impossible? One of the beautiful things about art is that it’s not science. What it is, here, is a medium through which we can explore the past and also visit the future.