Larra Anderson, Dean of Screen at London College of Communication, gave an insight into ‘Mansfield 66/67’ – the new documentary co-produced by Larra which follows the life of Jayne Mansfield – during a screening and Q&A at the ICA.

Larra worked with directors P. David Ebersole and Todd Hughes as co-producers on the feature documentary, and alongside John Tanzer as co-cinematographer. The film focuses on the final 2 years of film star Jayne Mansfield’s life and the rumours surrounding her untimely death.

Yasmine Akim, BA (Hons) Photography graduate, attended the screening and Q&A and shares her thoughts in a guest blog post…

“Mansfield 66/67, the feature documentary that follows the life of Jayne Mansfield, the intelligent and glamorous film star who was addicted to the limelight, was screened at the ICA along with a Q&A.

The documentary was co-produced by Larra Anderson and directed by P. David Ebersole and Todd Hughes. The crew consisted of students and staff from Leeds Beckett University, with over 100 people involved in total. 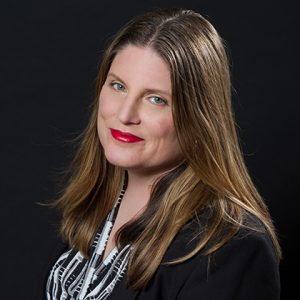 Larra Anderson, Dean of Screen at London College of Communication

Visual archive material played a huge role in shedding light onto her legacy. The drama pieces and performance art depicted the actress’ life in a surreal way, and several artists and filmmakers including Kenneth Anger and John Waters were interviewed.

At the screening, Larra gave an insight to some of the processes and decisions behind the making of the film. She said: “I have been working with Todd and David for 20 years now. When we started talking about the initial process, they said that they didn’t want a ‘busty blonde’ to replicate Jayne’s life on screen. So we started talking about alternatives.

“That’s when different mediums such as animation and dance came into the picture. I said to them ‘Instead of me coming to LA, you should come here [to Leeds Beckett University, where Larra previously worked] because we have a film, music and dance department, as well as incredibly talented staff and students – who know what they are doing.’ So they came down and it was an amazing experience.”

“For me, the film highlighted intergenerational changes to do with sex, as well as the fine line between agency and exploitation in celebrity culture.” — Yasmine Akim

There is a thought-provoking crossover between Mansfield being seen as a celebrity icon and a goddess. We will always project our fantasies of societal perfection onto the other. On the other hand, she was authentic and decided to have children regardless of what her management told her.

There is a psychological dilemma embedded into celebrity culture, which was birthed by stars like Mansfield in the 50s. She felt as if she had a duty to share her life with the public – something that has become commonplace now and has led to several public breakdowns, which people often see as entertainment.

Her affair with Anton LaVey, the leader of the first ‘Church of Satan’, is a central aspect of the narrative. Interestingly, the film was released to coincide with the 50th anniversary of her death; we are confronted with the fact that the public felt as if she was genuinely cursed by the Pop-Satanist.

For me, the film highlighted intergenerational changes to do with sex, as well as the fine line between agency and exploitation in celebrity culture.

Co-director P. David Ebersole said: “The veracity of something is not as interesting as something that lives in the mind of the audience.

“If you think of the story of Mansfield, most people have an image about what they think of her. And then when you are dealing with her and Anton together with three to four photographs as evidence, you get an entire story created out of this mythical perception of what people have created about their relationship.

“We got fascinated with the idea of what lives inside of the audience. How do we respond to something in culture, and then how does that move forward?'”

Read an interview with LCC’s Dean of Screen Larra Anderson all about ‘Mansfield 66/67’.