On our course, as well as learning about the set design side of the industry we also develop skills in designing and operating lights. Recently we were lucky enough to have a workshop lead by Nic Farman, a lighting designer who primarily specialises in theatre and live events.

In his words, “Lighting is all about creating emotion and telling a story”. He also described his job as “like being an artist where the chosen medium is light”. Another aspect of his job is escapism, which Nic stated “helps the audience to suspend their disbelief during a performance”. 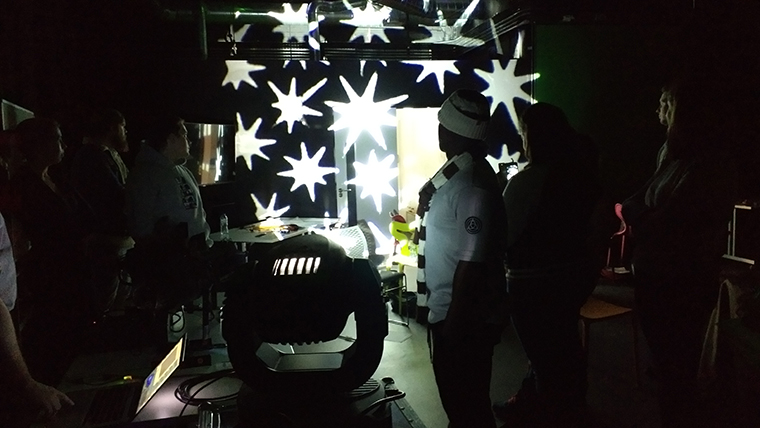 In the workshop, we looked at how to read through a script and then devise a lighting plan from reading in between the lines. The main aspects we had to identify from the script were the setting, period, time and mood. We also learnt about the placement of light and how if one lantern is place in front of an actor they can appear flat; but when directed from the side, the actor’s body stands out from the backdrop more effectively. During the workshop, we were shown several different types of lanterns which demonstrated the progression of what lighting can do, and how specific types of lantern can transform the mood on stage.

We were also introduced to a new way of controlling the lanterns through a software called ChamSys, which was like an app for your laptop. The development of this technology means that for a touring production, it is not necessary to transport a heavy lighting desk inconveniently from venue to venue. Furthermore, for the operator it means they would not have to adapt to a new layout of lighting desks each time they worked on a new project, as everything they needed could be controlled from their own desktop.

Huge thanks to Nic and White Light Ltd from Course Leader Candida Moriarty and the BA (Hons) Live Events and Television students.