Review // LCC Journalism Talk: So You Want to Be a Features/Entertainment Journalist

Many myths about entertainment journalism were busted by a diverse and engaging panel of industry figures at the LCC Journalism Talk on Tuesday 11 February, hosted by ITV’s Charlene White. BA (Hons) Journalism student Divya Bhavani reports.

Nesta McGregor from BBC Radio 1, Jasmine Dotiwala from MTV Base and MTV Europe, Simon Hattenstone from The Guardian and Joanna Abeyie from Closer magazine spoke about how they started out.

As a former presenter for the popular 90s late-night show The Word, Jasmine told us how important it is to be a “jack-of-all-trades,” due to the ever-expanding multimedia platforms on which journalists are expected to work. Her varied resumé proves that there is no end to what you can give to a job you take on as long as you take with you some important values. After being both a runner at Channel 4 and a producer at MTV, Jasmine stated that persistence and professionalism are her keys to success. 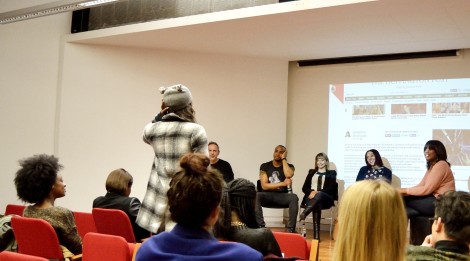 Joanna described her dogged determination to become a journalist since the age of 16, despite the minimum age for applicants being 18! “Pretty much any time I had a day off at uni or I finished lectures early, I just went into work experience or doing anything in between that was honed in magazines at the time… So, antiques magazines – you can imagine that was so fun!”

Simon was the first journalist to have met Banksy face-to-face and to whom Amanda Knox wrote letters, so there was a lot of interest in what he had to say… and he did not let us down. He emphasised that getting into this sector isn’t always “natural or easy,” going on to explain that it was his voluntary work, like writing for newspapers for the blind, that broke him through to media. In fact, his employers at The Guardian seemed “freaked that [he] didn’t go to Oxford, didn’t have a first,” which is a common insecurity I’m sure many of us have when we look at the ‘requirements’ section in a job or internship advert!

When asked why it’s so hard to get jobs in radio and broadcasting, Nesta assured us that it is solely because “people like us refuse to leave,” which just goes to show that passion and persistence are important in this profession. While some of us actually freeze up at the thought of doing one job for a considerable period of time, Nesta pointed out that it is what we do with it that makes the one job seem like several. His progression from his early days repairing office machinery to now kicking back in radio studios nevertheless represent an impressive arrival into journalism.

The boom of blogging and vlogging within the student journalism community received positive feedback from Jasmine who stated, “This person has already made moves; I can help them get somewhere further. You’re going to make us look good, we’re going to make you look good… If I already have a champion who is striving and making great things, I’m going to help you come further.” While we all enjoyed the success stories that our speakers brought along, it was a question regarding past mistakes which had the audience instantly leaning forward. Nesta sheepishly told us all about how he messed up a red carpet interview with Viggo Mortensen at the premiere of A Dangerous Method by only having watched the trailer of the movie… which proved to be a dangerous method. While the story was amusing, it was a clear reminder that (a) Viggo Mortensen is someone you do not want to cross and (b) research for an interview is undoubtedly a must!

It was clear that this panel inspired the audience of media students in a time of assignment deadlines, financial woe and the general angst of being a university student. Katrina Schollenberger was one of the many motivated people affirming, “The panel was really inspiring because they were all so relatable. They were humble and their advice was so beneficial because they had all been in our positions as students, eager to get into the industry. Hearing their stories, through both rejection and success, made me hopeful for my future journalism career.”

As a media-orientated college within UAL, we are lucky to receive a constant flow of wisdom from people who assure us that we are the future of news. We thank Simon Hinde, Charlene White and all our speakers for their real take on the never-uniform track to journalism success.

Read Simon Hinde’s Storify of audience reaction to the event