On Tuesday 20 May, London College of Communication played host to a guest lecture from VFX/comp supervisor and compositor Mark Bakowski of visual effects studio Framestore London.

Mark has worked on many award-winning films including ‘Gravity’, which won the 2014 Oscar for Best Visual Effects along with VFX honours from Bafta and VES. He chatted to LCC students about his work on the smash sci-fi thriller, from planning to the final edit, and took audience questions about careers in visual effects, his own background and how to break into the industry.

Beginning with a Framestore show reel demonstrating the range of work undertaken by the studio, including production and direction as well the obvious animation, motion graphics and visual effects work, Mark then explained the particular challenges of working on ‘Gravity’. 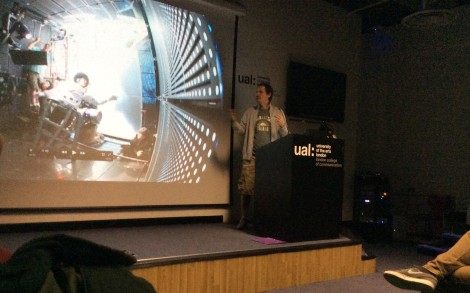 On top of this, the film naturally required the appearance of zero gravity, here achieved using computer-generated imagery (CGI) rather than the reduced gravity aircraft or so-called ‘vomit comet’ used in ‘Apollo 13’ (1995).

Mark’s talk underlined the incredible scale of CG work in the film, with frequently no live-action visible in a shot other than the faces of stars Sandra Bullock and George Clooney. Bullock in particular spent a lot of time on wires, on a specially designed ‘bicycle seat’, or, incredibly, being puppeteered by a team coordinated by Al Nedjari of Handspring Puppet Company (of ‘War Horse’ fame), to eliminate the appearance of muscle or tendon strain.

The audience also heard how to disguise cuts with, for example, a cloud of breath, or lens flare, and how difficult it is to match space props to NASA originals when these are repeatedly updated during the film’s four-year production period!

Mark also addressed some of the issues picked up by physicists upon the film’s release, admitting that the light levels are unrealistic at times to enable everyone to see the film’s stars, but pointing out that compromises are sometimes necessary.

The advice for would-be VFX artists was simple: get some good starter software and play with it, and be prepared to start out, as Mark did, as a film industry runner. Keep working, keep showing people your work, and enthusiasm will be rewarded. He was extremely positive about the state of the UK effects industry, though pointed out the hard work and long hours involved: “It’s an industry that survives on people wanting to get into it”.

A huge thank you to Mark for giving up his time and shedding light on a fascinating industry and potential career path for LCC students.

An introduction to Framestore’s work on ‘Gravity’.

Read about LCC’s School of Design