On Tuesday 7 March, following the opening of the Beyond Borders Exhibition in LCC’s Lower Gallery, the College welcomed 5 panellists for a discussion on the subject of journalism, refugees, migration and media misrepresentation. 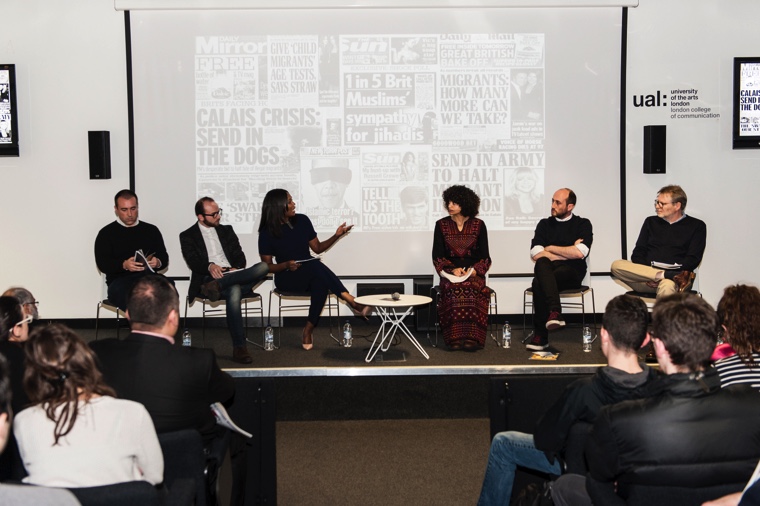 The Refugee Journalism Project is a collaborative initiative between London College of Communication and the Migrants Resource Centre, aiming to help exiled and displaced journalists to re-establish their careers within the UK media. Beyond Borders Exhibition (open 7-17 March) presents a collection of work exploring the impacts of migration and the complexity and resilience of identity. Beyond Borders Panel Discussion opened with a short film about The Refugee Journalism Project.

With no time more apt to discuss issues of migration and journalism, each panellist offered a unique and valuable perspective, either first-hand as a refugee, or from their  experience of working within the UK media. The discussion branched out quickly to social media, where students could have their say using the hashtag #LCCBeyondBorders.

Key themes from the panel discussion and accompanying Twitter conversation are summarised below.

Shahd Abusalama, a Palestinian writer and artist, began the discussion by detailing the way in which the media uses migrants and refugees as scapegoats, manipulating public fear and mistrust of government to incite hatred against them.

Shahd spoke of the trauma of the asylum seeking process in the UK, and the prejudice that she faced first-hand and urged, “refugee protection must include the protection of refugees from media misrepresentation.” 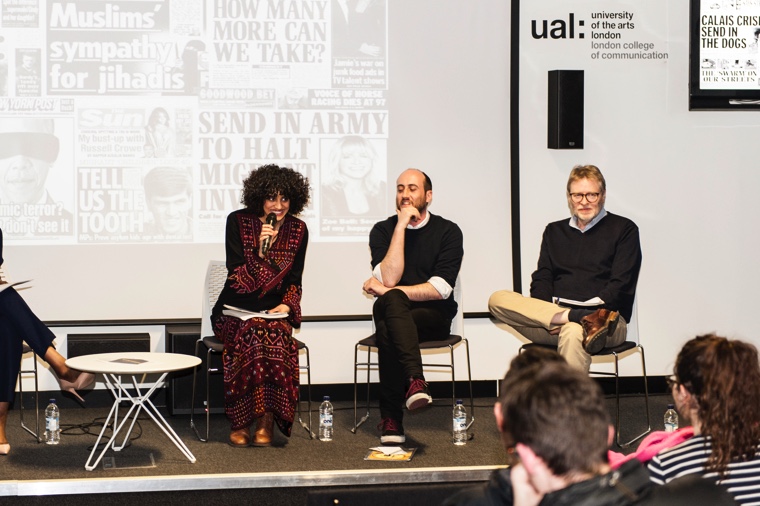 She told the UK media to take accountability, arguing that we have a responsibility to “counter the narrative”. Initiatives such as the Refugee Journalism Project encourage voices that might not otherwise be heard, offering refugees the right to “represent themselves and defend themselves.”

Daniel Trilling, Editor at the New Humanist, commented on the subject of media misrepresentation, speaking from experience as both a magazine editor and reporter. He argued that the issue with the media’s representation of refugees is not that it is unashamedly negative, but more specifically that it is often both fragmentary and contradictory.

Daniel explained: “viewers and audiences were getting a fragmented picture, and not enough work was being done to link events together, to show what the underlying political causes really were.”

As well as the need to protect refugees from negative stereotyping, Daniel called for another consideration to be made: “as well as protecting refugees from malicious stereotypes, we must be mindful that positive stereotyping is not impacting refugees in a negative way.”He offered the example of child refugees, which have become the visual representation of the crisis in mainstream media.

Such focus on these vulnerable children, Daniel warned, can cause us to lose sight of the adults making incredibly hard, considered choices to migrate or seek asylum; erased from the narrative by media misrepresentation.

Next, we heard from Maurice Wren, Chief Executive at the Refugee Council, who highlighted a distinct change in the way the British public were reacting to the coverage of refugees in the UK. He identified 2015 as the year in which the public began to challenge the mainstream media narrative, unsatisfied with portrayal of the crisis. Calais changed the notion of what ‘refugee’ meant to us – the news wasn’t sitting well with us any more because we were seeing these events play out ourselves via social media. He identified this as a simple victory for public organisation.

Back to the basics of ethical journalism

Tom argued that there are two main ways that the media addresses refugee stories – either from a human perspective, or a pure numbers game. He called for the media to find a balance between the two.

“We have to go back to the basic ethics of journalism,” Tom explained. “The two journalism regulatory bodies in the UK will only accept complaints about one story at a time, they will not accept complaints on the totality of coverage or narrative over time.”

He called for vigilance, arguing that, “we need to try and improve journalism, and encourage the media to collaborate more on long form pieces of in-depth, researched content” which would offer us the opportunity to gain a more comprehensive understanding of why people are fleeing their homes. 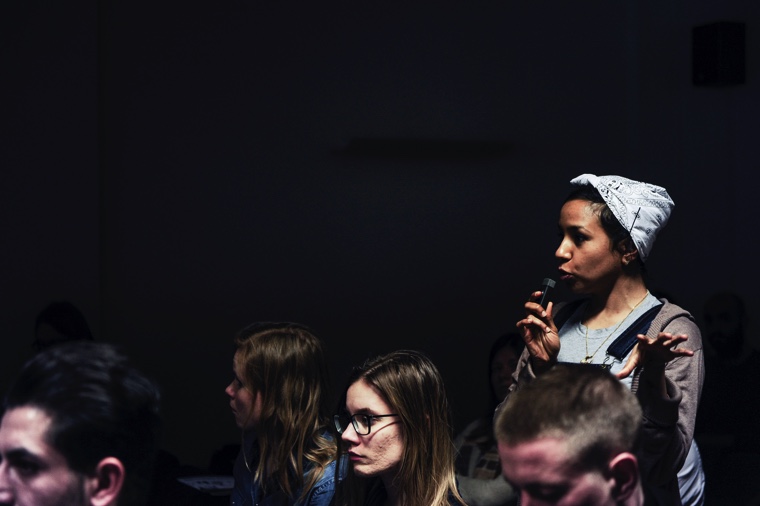 The debate topic shifted as panellists took on the question of diversity in UK media, and our responsibility to promote refugee voices. Tom Law encouraged the audience to watch the recent speech made by Riz Ahmed, which outlines the crucial nature of representation targets in UK film and television. “Without seeing yourself on screen,” he explained, “your sense of identity and belonging is undermined.”

Abdulwahab put it simply, quoting an Arabic proverb to support his point. “When you’re talking about Syrians, ask Syrians,” he urged, “the people of Mecca know their roads better than anyone else.” Finally Law added, “there’s great refugee journalism and it doesn’t get the readership. If we want in-depth, factual reporting, we have to show support for it financially to ensure that the market continues to exist.”

Initiatives such as the Refugee Journalism Project and those like it are crucial; collective action and a continued effort to demand better representation and factually accurate content is the only way in which to force the narrative to change for the better. 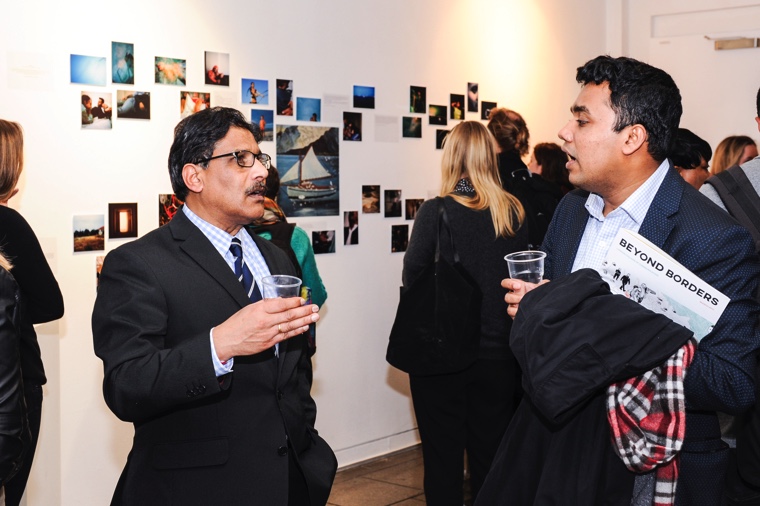 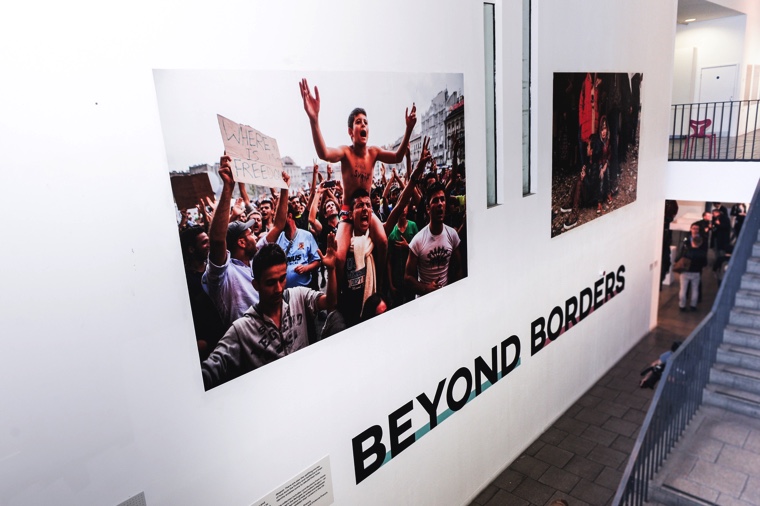 Work from the Beyond Borders Exhibition. Image © Ana Escobar.