On Sunday 22 June, filmmaker and LCC Professor of Film William Raban introduced a screening of an extract from his latest work at the launch of creative journal NOIT-2.

NOIT is produced by Flat Time House, a gallery, archive and artist’s residency space in the former home and studio of conceptual artist John Latham, in conjunction with Camberwell Press.

A biannual journal, it explores Latham’s artwork and key theoretical concerns such as the role of the artist, art and science, time, language and value/belief systems.

This second edition of the journal has been guest edited by Lisa Le Feuvre, Head of Sculpture Studies at the Henry Moore Institute, and contains new writing, artists’ contributions and original research.

The London launch took place at Flat Time House and was accompanied by a special preview screening of an extract (with introduction) from William Raban’s new film ’72-82′, which documents ten years of London’s ACME gallery.

’72-82′ features footage of pyrotechnic performances by sculptor and performance artist Stephen Cripps, tying in with NOIT-2’s theme of artists and burning. 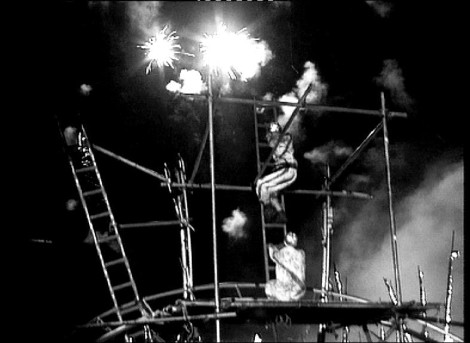 Also screened at the launch event was ‘Rights of Passage’ (1997), a short film made by William documenting the percussion and pyrotechnic event of the same name by artist and musician Paul Burwell.

Read more about Research at London College of Communication.