BA (Hons) Photojournalism and Documentary Photography graduate Marcus Drinkwater has been documenting a Spanish Search and Rescue vessel off the coast of Libya, working with NGO Proactiva Open Arms.

The sad reality of the geo-political disaster means that many sub-Saharans seek passage through Libya, facing many dangers in the process. Men are forced to work in agriculture to pay smugglers for their place on the dingy while women are often abused and sold into sex slavery, with many pregnant on board.

Marcus, who graduated in 2016, recalls a particular day while working and said: “We were the only NGO in on the coast able to transport migrants and picked up 682 refugees between 6am-8pm. If Proactiva were unable to provide safe passage it could have been a humanitarian disaster, many would have drowned or be returned to Libya to face persecution from smugglers and human traffickers.”

Marcus’ important and compelling work documents the people and places impacted over the course of a few months. We got in touch with him to learn more about his involvement and experience…

How and when did you become involved with Proactiva Open Arms?

Since graduating I have been compelled to document the migrant crisis as it is currently one of the world’s most talked about issues. After an assignment in the Balkans during early 2017, I decided to continue covering the story so contacted a group of NGOs to see if they would let me document their operations in the Mediterranean. Proactiva currently operate three vessels in the Mediterranean (Golfo Azzurro, Open Arms and the Astral). In addition to their their search and rescue efforts, they also run seminars in Spain to educate people on the crisis.

How many other people are you working with to document the Spanish Search and Rescue vessel and how long have you been working with them?

I work alone and submit my images to my agency, from there they are distributed and picked up by publications from TIME to the BBC. This summer I spent roughly one month at sea on this assignment, which seems like a lot of time to be on the ocean… It is! Salif Magassa left his family in Mali over two years ago. Spending one year in Libya he was forced to work in a kitchen to pay for his place on a migrant boat. He hopes to live in Italy and meet his brother whose fate is still unknown. One day he hopes to go back to school.

During your time working with the NGO roughly how many people have you seen rescued in their operations, and what happens to those rescued?

Thousands. One day we rescued over 750 alone while being shot at by the Libyan Coast guard. Spending over 10 hours on the water in 30 degree heat takes its toll on your body. From there we have a 20-30 hour sail to Italy. The crew do their best to keep everyone comfortable in the heat with as little food and water as possible to preserve supplies in case of emergency.

In what way do you feel it is important to document this happening?

For me, photojournalism is documenting history for the present and the future. You hope one day people will look at the images and learn from the past. A lot of people have died, maybe we can learn from past crises like this and it can be avoided in future. 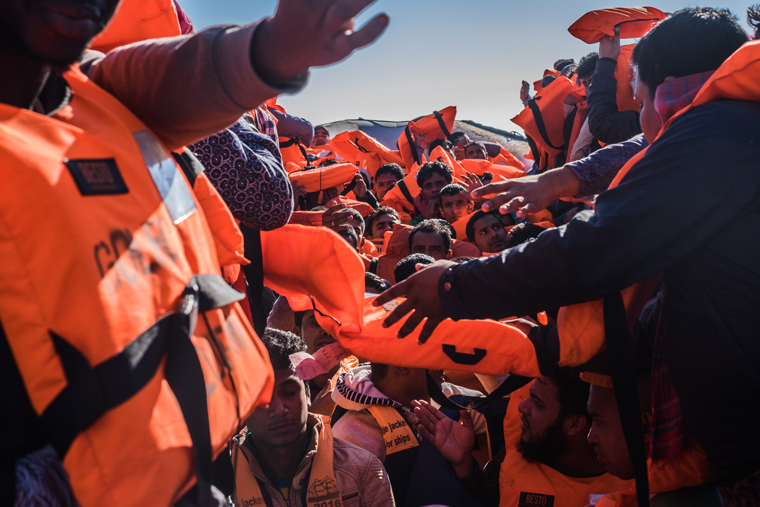 Mediterranean Sea – May 18: Migrants are given life jackets by Spanish NGO Proactiva Open Arms 16 miles off the coast of Libya.

What do you seek to achieve through this work?

To start a narrative. Whatever your political standpoint or view of this situation, I think it is a world problem and needs to be discussed. Also the way I see the majority of photojournalists cover this issue doesn’t sit right with me – these are people and deserve to be shown with dignity. Even when I am photographing a body in the water I try and do it with as much dignity as possible.

“For me, photojournalism is documenting history for the present and the future. You hope one day people will look at the images and learn from the past.” – Marcus Drinkwater

How do you feel this experience has shaped you as a person?

I want to work more, work harder and see more.

How do you feel your time on the course at LCC has prepared you for this role?

It was a privilege to spend three years of my life studying in and documenting London at LCC. Initially starting in first year I was apprehensive given I didn’t know what to expect and it can be challenging as the course encourages you to often work independently and go out and find stories.

At first this is daunting and often people get disheartened but it’s preparing you for the cut throat world of photojournalism where nothing is easy and you are almost always working alone. I owe a lot to my course leader, Rogers Hutchings, who pushed me to explore and look at stories at different angles. 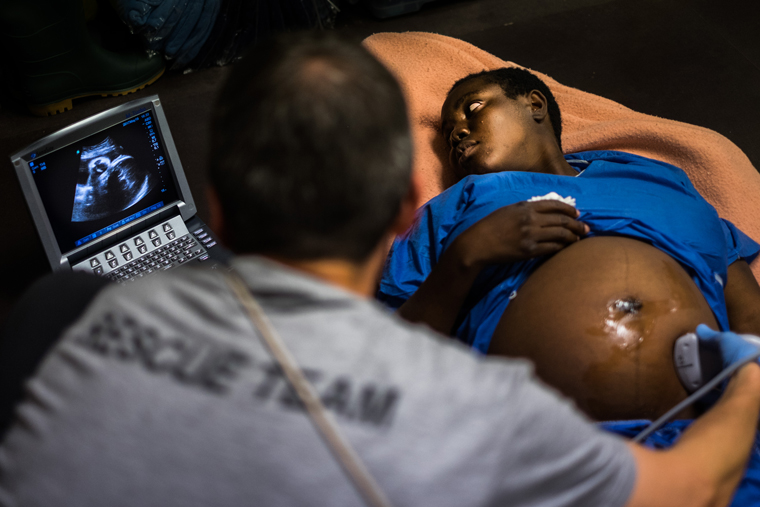 Mediterranean Sea – May 19: Marry, 27 from Nigeria is given a ultra sound at 8 months pregnant from Proactiva Open Arms ship doctor. This is the first time she has seen her baby.

What advice would you give to other photojournalism students wanting to make impact like yourself?

You are going to graduate and feel lost – it’s normal. Don’t stop that momentum you gain shooting your final project. Use it and move on, improve and shoot as much as you can. Make the jump and take risks, if you want to cover a story don’t stop till you have. When it gets published, feel good but then want to work harder and get better with each assignment you cover. Don’t feel bad about working another job to help fund your photojournalist either, I worked nights in a hotel 5 days a week and used all that money on equipment and plane tickets.

In what ways do you think photojournalism can ignite change?

Now more than ever in this world of social media imagery is so powerful. Don’t fight against it, use it to your advantage.

I’m always looking for new stories home and abroad, I often get an idea and write it down. At the moment I’m preparing to cover war zones, taking courses in working in hostile environments.

Check out some of Marcus’ work on his Instagram page.