EYESORE documents the changing nature of cities and investigates the issues affecting these places around the world. The sole purpose is to engage with people and offer a platform for them to share their experiences of the urban landscape they occupy and debates about its own future. With Issue 1 selling out, and the most recent Issue 3 close to follow, EYESORE has been incredibly well received and is now being stocked across the UK, Copenhagen, Amsterdam, Barcelona, as well as Belgium.

How did you find celebrating the launch of Issue 3?

It was great. The highlight for all of us was definitely the panel discussion. The audience got really involved, many people sharing their thoughts on the current situation in London and some got super emotional. There was one lady who was quite open about her anxiety as an artist living in this big, expensive city and that resonated with everyone in the crowd.

Considering it was a bunch of university students with no experience in the publishing world it all went pretty well! People related to what we were trying to say, what we were trying to do, and as a result were very supportive. Issue 1 sold out, Issue 2 is almost there and Issue 3 will have no copies left by Christmas.

We’ve noticed the pool of people who we work with seems to increase every few months, often through other stuff we all have going on outside the magazine and so we’ve been happy with how we’ve grown in such a short space of time. As we are involved with the whole process from conception to printing to launch, there is a real organic feel to the project and that’s been key to the last couple of years.

How does it feel to have the magazine stocked internationally?

Humbling and amazing.  It feels great to know that a random individual with no relation to any of us could pick up a copy and dive into the stories of those that have contributed to the magazine. We are eternally grateful to friends and family who pick up the magazine and support us, but the real satisfaction comes when people who we have no connection with at all, in cities and towns around the world that pick up the magazine and see what we’re about. A big thank you to RA & Olly and especially Adrian for helping us so much with the distribution side of things. 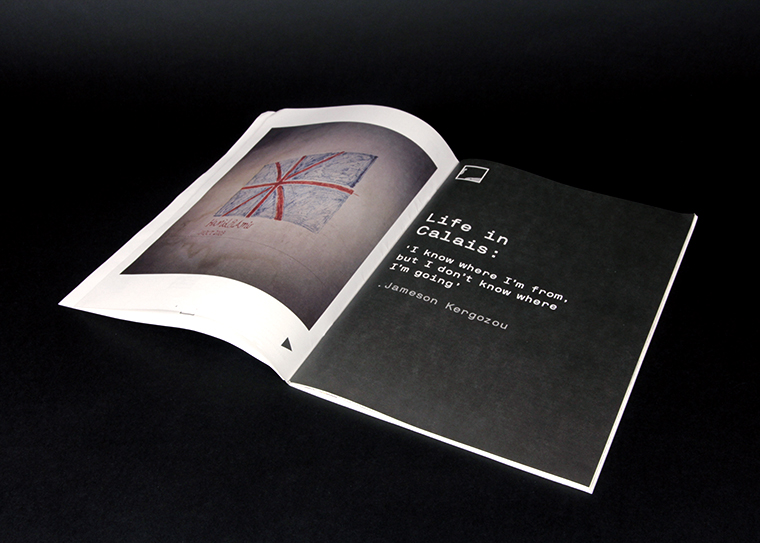 How did the idea for EYESORE Magazine come about?

My friend Chris proposed an idea for a print magazine about cities over dinner one night a couple of years ago and at the time a lot of my work was focused on buildings, people, how cities change, so it felt like an exciting idea to put my energy and time into. After that it was about assembling the right team. We both reached out to friends who we knew shared a similar interest in the city and soon we had a six person group ready to get on with things.

We were all living in and studying in London and it was clear that many of the areas and buildings we knew were undergoing dramatic change, heading in a direction which wasn’t necessarily positive at all. We wanted to react to that, to share our thoughts and more importantly hear what others had to say about it. A small, printed magazine seemed like a good place to start and that’s how EYESORE came about.

What has been the process of putting it together?

The process has been different for each issue. We started the first issue halfway through final year and that was a big challenge juggling the two together. Content was mainly from friends and acquaintances and the whole issue took around three months from initial conversations to the launch. By the time we started work on the second issue we had graduated and started our careers in other prospective fields. The challenges were different, we had more experience and content came from a bigger circle of friends but as a team we were around each other less.

For Issue 3 we put out an open call for submissions and the reception was insanely positive. That was an altogether different process to the first two but definitely more rewarding receiving and engaging with work from complete strangers – often from places in the world we’d never even been to. The main constants over the first few issues have been the core team and our printers, LCC’s finest Tony and Scott who we are eternally indebted to. It wouldn’t be the same without them both!

Besides from the magazine, what else is EYESORE involved with?

Earlier this year we began a podcast series, interviewing artists, writers and musicians whose work deals with the city in some way or another. Sarathy Korwar sat down with us for one. He’s an Indian-raised, London-based drummer who released a beautiful spiritual jazz record on Ninja Tune last year. Iain Sinclair, Rut Blees Luxemburg and Nick Hartwright are a few other names we’ve had on the show and we are very much looking forward to carrying the podcasts on into the new year. They’re all available on Soundcloud or iTunes. 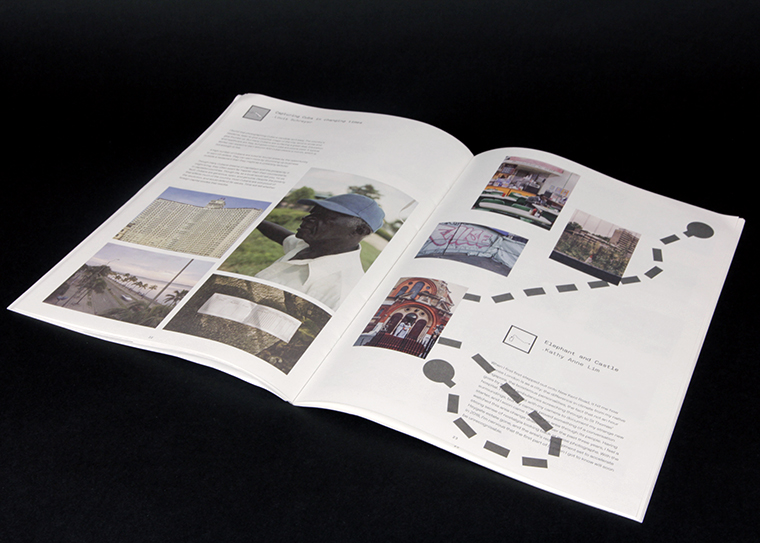 Inside spread from EYESORE magazine

What is next for the magazine?

We’re currently working on a small debate series which will kick off in 2018. It will be focused on London and some of its key issues of which we feel need more open, critical discussion and engagement with. We’re also going to be continuing the podcast series which we began earlier this year. Oh and of course the small matter of Issue 4

What has been the highlight of the journey with EYESORE so far?

A major, if not the main, highlight within the short journey of EYESORE has been being able to work alongside friends who each share different opinions and ways of thinking but can all come together to work and create something like EYESORE. We all have different backgrounds but came together to do something we felt strongly about and that’s been a very rewarding experience

What has been the most challenging aspect of the journey?

Working in a group of 6 has been equal parts difficult and amazing. Deadlines are rarely met, everyone has something else to get on with, but someone else can pick up where one left and most decisions are run by the whole team so we are all constantly involved in every process.

Nina’s had it toughest as she has to work from Belgrade as her visa wasn’t renewed after graduating, but she still does the entire design and a hell of a lot more. We owe her a lot and hopefully one day soon we’ll be able to have her back in London for good!

What advice would you give to those seeking a career in magazine publishing?

Don’t do it for the money because there isn’t any in publishing. Try do something that you feel passionate about, but also not necessarily comfortable with. If you can, speak to others who may agree or disagree, but overall, understand where you’re coming from.

Find out more about the magazine on the EYESORE website.