Two recent LCC Postgraduate Diploma Broadcast Journalism graduates have been nominated in the top journalism categories for the prestigious Radio Academy Awards.  Previously the Sony Awards, the RAAs bring together the entire radio sector to celebrate outstanding content and creativity.

Jo, who now works with BBC Cambridge, has worked as a newsreader, reporter, producer and news editor in local radio for the last seven years! Jo explained, “I’m thrilled to have received a nomination in recognition of this. I still can’t quite believe it.” 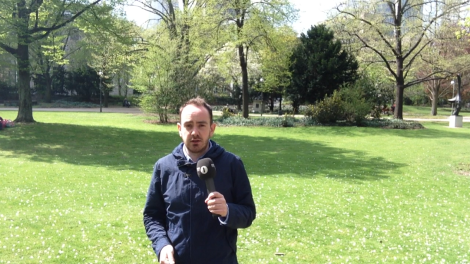 Declan, out and about with Radio One.

Between them Declan and Jo have over eleven years of experience working in radio, and have already won several awards for their journalism. Having recently spent five months investigating the lives of Eastern European migrant workers in the Fens, Jo is now also working on a development attachment at Look East and Inside Out in the Eastern region.

Declan is a regular fixture on a team at the ever popular BBC Radio Newsbeat. Declan told us he was stunned, and pretty pleased, with his nomination as it’s only been around five years since he was studying Broadcast Journalism at Elephant and Castle under Martin Shaw and Rebecca Pearce.

Good luck to both!

The award ceremony is on Monday 12 May at The Grosvenor Hotel, and will be hosted by Chris Evans.