In the second week of our Magnum Documentary Photography course, the students have been immersing themselves in London life and developing a personal project inspired by the city. Dean Berner writes for us here about getting to know his subject: the British Museum.

My eyes have been opened.

My eyes have been opened, and I have not shut them for two weeks. I’m kidding, of course, but the word intensive in the course title was no joke. That said, I am definitely not complaining. The course has been challenging on many levels, but also quite encouraging. I would do it again in a heartbeat.

So far, we’ve had two immersive weeks of learning the ropes of documentary photography: the history of the genre and Magnum’s great impact on it, conceptualising and executing a documentary project, the wonderful world of the photobook, class and individual photo critiques, and much more.

Our personal documentary projects are taking shape, and have been equally important as the classroom learning.

One week remains in the course, in which time I will continue shooting and editing my project, come up with a title, sequence the photos, and put any multimedia finishing touches on it. We present our projects to our professors, industry members, classmates, and friends in seven days. The clock is ticking.

The brief for our project directed us to “convey a narrative about a particular geography, identity, or culture”. Both Stuart Franklin and Mark Power emphasised the importance of homing in on a specific location, so that our projects would be concise enough to cover reasonably in our course time of three weeks. For my project, I chose the British Museum. 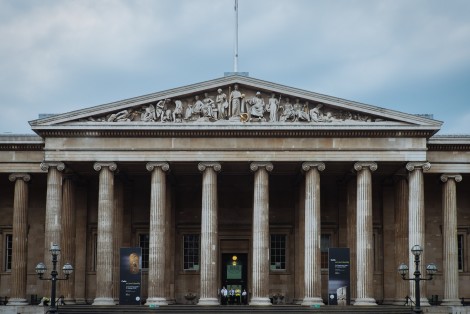 Initially, I considered several project ideas and locations, but after a class visit to the British Museum, I knew I had my place. A beautiful building where history, geography, politics, and people of every nationality merge: what more could you ask for?

One of my main photographic interests is street photography, so I took that approach to the museum; to observe the interesting behaviour of the people there. With 15,000 daily guests at the museum, there would be plenty of human behaviour to observe.

As I began, one of my main challenges was to let go of my preconceptions of what the project should be. I started out on the surface and tried to feel out the space and the light, both inside and outside the building. Most of my photos from the first day or two are of the architectural elements in the various halls.

A bit like history itself, the Museum has yielded layers upon layers of photographic fodder as I dig deeper. I began paying more attention to the waves of visitors and how they were interacting with the exhibits: some are literally hands-on, some very respectful and deliberate, and some breezing through each hall, only taking pause for a selfie. On my third day of shooting at the Museum, I began to feel a sense of disorientation in the midst of the chaos. I began looking as much at the reflections in the glass exhibits as I was at the people walking by. I felt the project taking a turn of its own accord. 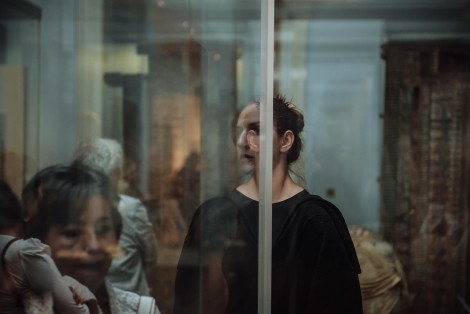 At this point, I will have 3-4 more visits before the end of the course. My challenge at this point is to weave together the different types of photos that I’ve made so far into a cohesive project. As I have gotten to know the museum better, I have found several locations where I have a particular shot in mind that I want to get.

Mark Power said that photography can be a lot like fishing, where you have to find the right spot to cast, and then it becomes about patience and perseverance.

With the myriad options for different shots in the museum, it initially seemed that it would be as easy as catching fish out of a barrel. The true challenge for me now is to know which ones I want to catch and to be ready to hook them as they swim by. 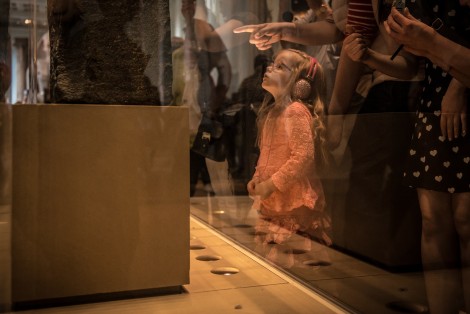