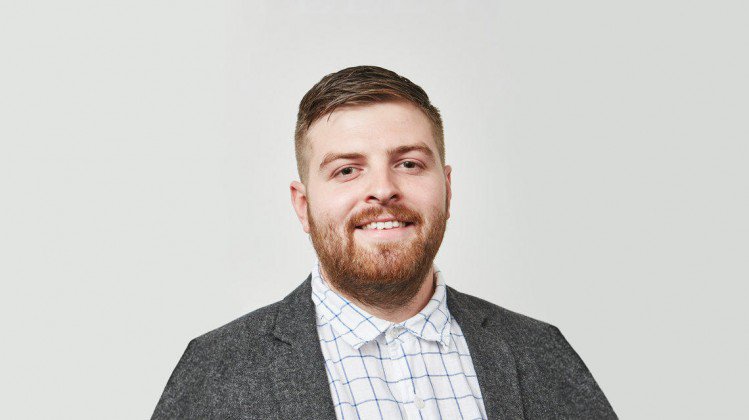 John Garvey, MA Screenwriting student at LCC, has been awarded a BAFTA scholarship

A London College of Communication student has been awarded a prestigious screenwriting scholarship from BAFTA – connecting him with an esteemed industry mentor in recognition of his talent and potential.

John Garvey, a current student on LCC’s MA Screenwriting course, has been paired up with screenwriter Sam Bain (Peep Show/Fresh Meat) as part of the BAFTA scholarhsip, with support from Warner Bros., and also awarded a financial grant. This provides John with the opportunity to combine LCC’s world-class teaching and collaborative community with industry-insider knowledge.

We sat down with John and asked him more about the scholarship, his experience at LCC and his future plans…

Congratulations on your scholarship, John! How do you feel about being chosen for the scholarship?

Thanks, I’m not sure if it’s quite sunk in yet. It is a huge honour to be considered an up-and-coming talent by BAFTA and their investment in my academic study has given me the confidence to continue to pursue my ambitions as a writer.

What sparked your interest in writing?

My interest in writing comes from my love of comedy. At an early age I was introduced to comedy greats such as Monty Python and The Two Ronnies, as well as much older comedy acts such as Laurel and Hardy and W.C. Fields.

I have always written in some form or another, but after an injury forced me to retire from my other passion, rugby, I decided to focus my energy on a writing career.

Can you tell us a bit about the application process for the scholarship? Were there any difficulties, if so, how did you overcome them?

The application was straight fairly forward and I found the BAFTA team to be extremely helpful when it came to questions about the scholarship. As part of the application I was asked to provide a portfolio of work. Having recently finished a feature length screenplay for my dissertation, I decided to use it as a sample script.

“It’s been great to meet other aspiring writers, all with different styles and influences. The course encourages collaboration with other courses, which is a great experience for anyone looking to work within the creative industry, as the process allows you to appreciate all aspects of creative projects.” – John Garvey, MA Screenwriting student.

If others were thinking of applying for the scholarship, what would be your advice to them?

During my studies I’ve been told of the importance of having a ‘calling card script’  – a go-to script if you will. My advice to any writer in general would be to know which script is your calling card script. Having a completely finished and polished script is vital because you never know when you might get an opportunity to put it in front of industry professionals.

As part of the scholarship, you’ve been paired with a mentor. How has this been useful to you?

Being given an insight into the industry has been incredibly helpful to my development as a writer. One of the best aspects of the scholarship is that the team at BAFTA do their best to pair you up with someone within the industry that you would benefit from. I have been very fortunate and have been paired up with Sam Bain. Sam has taken me along to read-throughs, rehearsals and production, which has been an invaluable experience.

You’ve been studying at LCC since this autumn, how are you finding it so far?

It’s been great to meet other aspiring writers, all with different styles and influences. The course encourages collaboration with other courses, which is a great experience for anyone looking to work within the creative industry, as the process allows you to appreciate all aspects of creative projects.

I’ve found the writers’ workshops particularly useful as they help you to develop your script whilst analysing the work your classmates are doing. It’s a lot easier to pick faults in other people’s work than your own, so I think it’s a vital element to the course as after a few workshops you realise your own faults which definitely helps during the redraft of your script.

“It is a huge honour to be considered an up-and-coming talent by BAFTA and their investment in my academic study has given me the confidence to continue to pursue my ambitions as a writer.” – John Garvey, MA Screenwriting student

Are there any writers you can name that have influenced your work in a profound way?

Jesse Armstrong and Sam Bain. For anyone looking to write sitcoms it’s impossible to watch Peep Show and not be jealous of its dialogue and character building. Another huge influence on my work is Rob McElhenney’s It’s Always Sunny In Philadelphia.

Although I have a leaning to TV comedy, I also have an interest in writing for feature. One of the biggest influences on my work is Quentin Tarantino, so much so that I’m pretty sure my undergraduate dissertation read like a love note to him.

What are your three ‘must watch’ shows?

Can you tell us if you’re working on any projects at the moment?

I’m currently working on an animation project with a fellow UAL screenwriter and animator. I am also in the process of finishing a pilot episode for a sitcom series, which I hope to send off to the Writers Room in the New Year.