As part of the campaign, 3 students from the MA Graphic Branding and Identity course at London College of Communication, UAL, won a competition to design the graphic identity of the Orange Label Project.

Competition winners Alex Syniukov, Betty Chen and Cristina Mazzoni were awarded £250 and the opportunity to go to New York to attend the UN Trust Fund Gala to End Violence against Women.

Initially, the 3 students each had their own ideas for the project, but the UN Trust Fund saw that the proposals had something in common, and wanted the students to develop the identity together. They chose Alex’s logo, Cristina’s concept and idea, and Betty’s approach on the project (see header image).

The logo was as simple as possible. The whole theme was to save women in the world – it features a ring that you can wear as an accessory, and the idea of a circle in a square is protective.
– Alex

My concept was about visibility – the fact that these women are invisible. I didn’t want to show the violence itself, I wanted to show the part where everything is transparent, where you can see through them, and where they will be themselves. Betty did the visual communication: banners and web pages.
– Cristina

All 3 students attended the UN Trust Fund Gala, which took place at The Loeb Boathouse in Central Park, where LCF’s Professor Frances Corner gave a speech about the Orange Label Project. Read the full speech.

The winning students at the Gala with Head of LCF Professor Frances Corner and Ligaya Salazar Director of Fashion Space Gallery.

Once the LCC students had developed the Orange Label Project brand identity, London College of Fashion used it to launch a competition open to fashion students around the globe and across disciplines, to produce a piece of work incorporating the project colour – orange.

The competition received hundreds of applications from students across the world, who entered their work into 1 of 6 categories: beauty, fashion design, film, journalism, illustration and photography. See winners and other entries.

The branding was also used to promote an #OrangeLabelProject social media takeover encouraging the fashion industry to #orangetheworld and show support by uploading an image featuring the colour orange to social media using the hashtag. 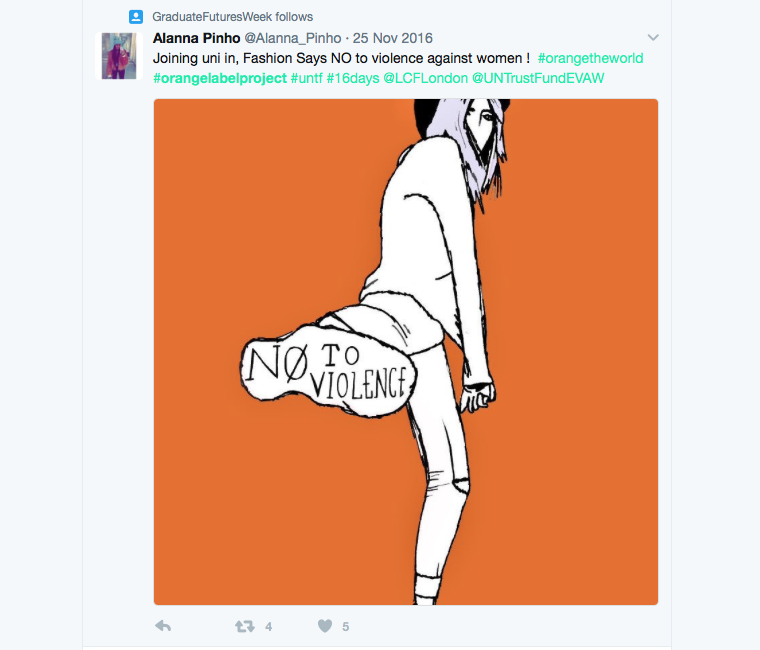 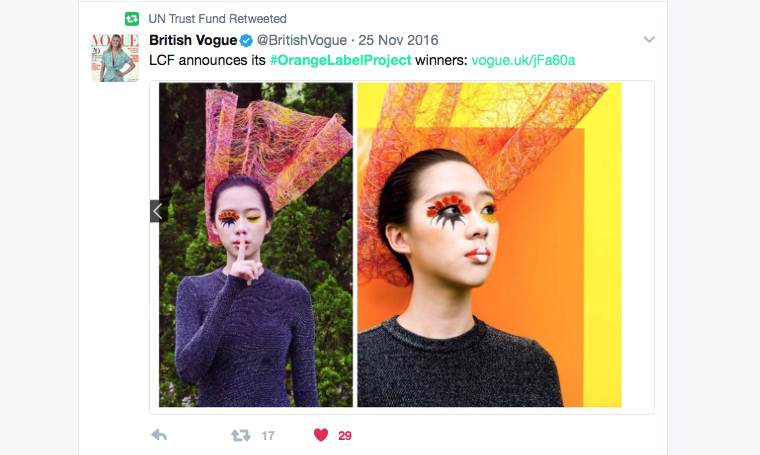 British Vogue got involved in the #OrangeLabelProject social media takeover.

The social media takeover took place on the 25 November 2016 and the #OrangeLabelProject branding was shared by the likes of Vogue, SHOWstudio and the Arts Council.