Graphic and Media Design graduate, Lauren Vaughan, who undertook the Diploma in Professional Studies, designed a set of ‘Data Deckchairs’ to celebrate the opening of the Elephant Park in Elephant and Castle last year.

Forming a part of London Design Festival 2017, the opportunity resulted from a challenge that Mark-London set students and graduates from LCC to invent activations for the largest green space developed in South London for 70 years.

The five ‘Data Deckchairs’ were created from research interviews with community members who have lived and worked in Elephant and Castle for a number of years. Every deckchair holds unique chromatic and numeric data relating to a specific local’s country of birth, languages spoken and relationship to the area. All of this adds up to inspire the colours that make up the stripes on each deckchair.

Elephant and Castle has been described as ‘super diverse’ in a report by the London School of Economics and this collaborative project celebrates diversity. The deckchairs act as timelines of individual lives and are a tribute to this vibrant, resilient community. The first of the deckchairs were created with the kind co-operation of Katherine Zuleta Gil, Shamin Uddin, Andy NG: Sola Rowe and Zhixiang Yuan. 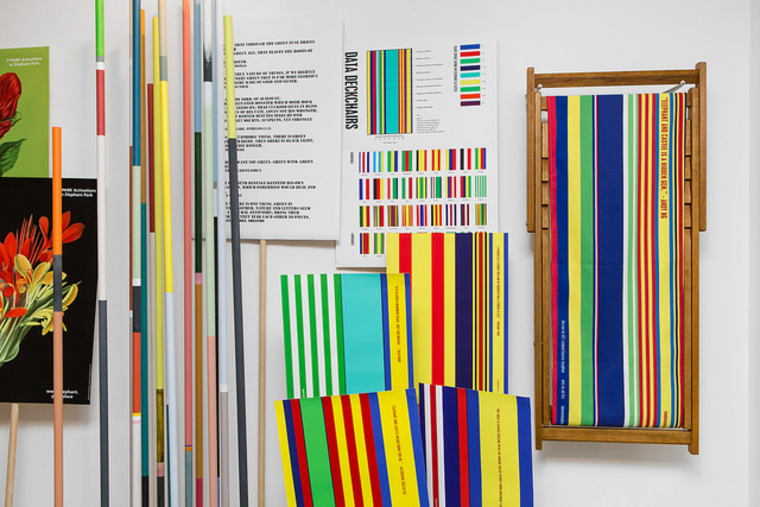 Data deckchairs on display in the LCC Studio

The Elephant and Castle ‘Data Deckchair’s’ were created for Elephant Park as part of the S*PARK Exhibition at LCC for The London Design Festival 2017. Lauren worked with Sarah Temple on this project during the summer as part of a series of interventions planned to contribute participatory, purposeful design for the local environment.

On Wednesday 27 September the co-designed deckchairs were first utilised at one of a series of al-fresco music evenings. It was great seeing them used for the first time. The Deckchairs celebrated the opening of the new Elephant Park. The data representing the life events was created with the kind co-operation of Katherine Zuleta Gil, Shamin Uddin, Andy NG, Sola Rowe and Zhixiang Yuan: the five community members that agreed to be interviewed. Their data was extracted and organised using a precise data key stripe system created specifically for this project by Lauren. This complex and intricate system combines variations of colour and stripe thickness, relating to each individual’s information. 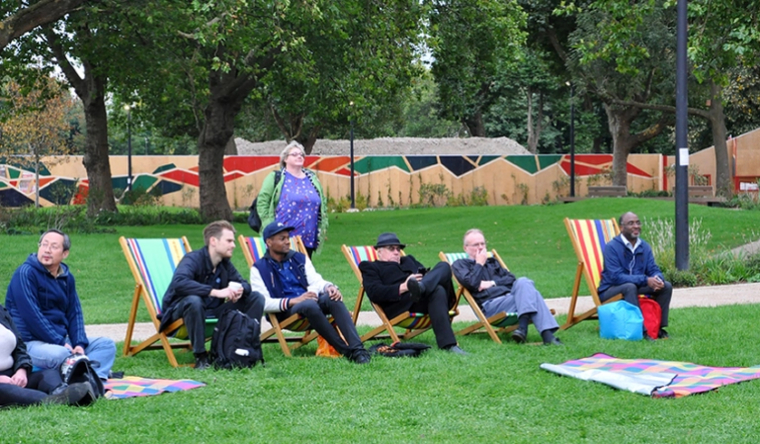 The concept was an extension of Lauren’s final year degree project, inspired by the colours and traditional designs of beach balls, wind breakers and deckchairs. “For me traditional deckchair stripes echo a strong cultural symbol for Britain and its seaside heritage. This exciting project gave me the chance to merge my design focus and interest in data visualisation to redesign and generate a new symbol and meaning to the iconic British seaside deckchair; making the object personal and unique to the individual’s existence” she comments.

This collaborative project celebrates the diversity to be found in the local area whilst embedding an iconic object such as the deckchair as a symbol for a community that is united through its social mix and uniqueness. The deckchairs act as timelines of individual lives and are a tribute to the vibrant, resilient community.

All of the deckchairs have a special place in Lauren’s heart as well as the individuals who they were created to represent. “I’ve had some great feedback from people who were fascinated to know how they were created. Andy NG is so well-travelled; he’s lived in lots of different countries and speaks four languages making his deckchair so diverse in its colour scheme and I personally love the colours in Katherine Zuleta Gil’s” says Lauren.

Lauren, who is embarking on a Masters in print design, has been inspired to explore data visualisation further.