‘Secrets and Lies’ explored the idea of individuality from both a creative and theoretical perspective, with the work on show often highly personal and covering subjects as diverse as religion, sexuality and architecture.

Students worked in teams to arrange different aspects of the exhibition, learning about the challenges of events organisation in the process.

Doomed Gallery in Dalston supports both emerging and established artists, with an emphasis on photography. The exhibition space has hosted work by over 300 photographers since opening its doors in 2011.

For the LCC show, Latisha Berker-Boyd exhibited a collection of naked selfies, some found via Facebook, entitled ‘The Theory of Nude’, inspired by the digital era and current trends in self-expression.

Gizem Kaya’s work explored cliches created by the media about Muslim women, with Gizem juxtaposing portraits of her subject, in which she gazes back at those who have placed her under scrutiny, with the woman’s framed wedding vows. 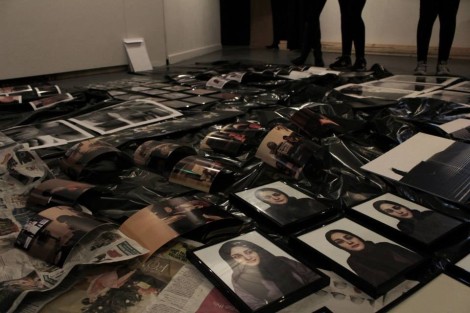 Heidi Agyapong’s ‘Strangers’ featured 28 Londoners photographed using Polaroids, together with a single word the subjects chose to describe their character. Heidi wanted to challenge London’s anonymity by creating a sense of closeness with people we would not otherwise get to know.

‘Vertical Landscapes’ by Lilian von Keller was a surrealist work highlighting the unexplored spaces created by urban architecture, and imagined a vertical walk up the side of a skyscraper.

Video piece ‘Secrets of our Journey’ by Maria-Louisa Harrison used the metaphor of a train journey to address the journey of life and death, with Maria-Louisa’s voiceover playing over continuous footage of train tracks.

Isabel Fernando’s ‘Space’ examined the use of space within the home and its relationship to particular family members, looking at private, domestic areas to ask how space can represent and define personal identity.

You can learn more about ‘Secrets and Lies’ in this feature for Next Up, an online news and culture magazine created by LCC BA (Hons) Journalism students James Childs and Diana Tleuliyeva.