LCC alumnus Souleyman Messalti, who graduated from MA Documentary Film in 2015, has been commissioned to make a 15-minute documentary for Channel 4 Online about the East London Strippers Collective.

The dancers are actively engaged in fighting for their rights and against the stigmatisation of their job, and ultimately would like to open Europe’s first ever co-operative strip club. Souleyman began working on this topic during his MA, then reworked the film into a longer piece which he successfully pitched to Channel 4.

We caught up with him to find out more about subcultures, trust and the importance of not judging.

What inspired you to feature the East London Strippers Collective in your MA work and subsequent Channel 4 commission?

I have been fascinated by people’s stories for a very long time now – I love listening to what people are getting up to, the challenges they’re going through and their perspectives on life.

I never judge people – I think there are too many layers to each and every single one of us to just put us in one category or another.

When I first met the founder of the East London Strippers Collective through a friend last year, she told me about the reasons they felt like they needed to unite. She spoke about the stigma attached to being a stripper and the working conditions they were trying to improve. Filming a studio routine by a member of the Collective.

I have always been interested in fighting stigma and misconceptions as part of my work, especially when it comes to so-called subcultures and so, after meeting them, I felt like the ELSC’s message needed to be heard.

After working on this subject matter as part of my MA, I pitched it to Channel 4 and luckily enough, they commissioned me to make a short doc about them.

How did you get to know the group and gain their trust?

Meeting the founder of the collective – Stacey Clare – through a mutual friend made the entire thing a lot less formal. After we met, I sent her examples of my work and she agreed for us to work together – that was a year and a half ago.

Since then, I’ve gotten to know most of the members of the collective pretty well and spent a considerable amount of time with them. I believe that trust from your subjects comes with time – no one will ever open up entirely about their world to a complete stranger.

What stage is production of the film at so far?

We’ve done most of the filming now and are currently organising a one-day shoot that needs a lot of planning; we’ve hired a strip club and are planning to film interviews and a lot of dancing from most of the members of the collective.

I don’t want to say any more, but the film will be out in the summer so keep an eye out! 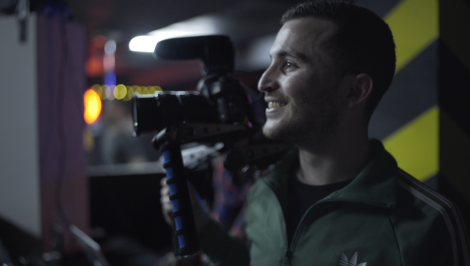