A new animated film, Ballerina, has just hit the big screen, co-written by LCC’s own BA (Hons) Film and Television lecturer Carol Noble. Created by Paris-based Quad Productions, the heart-warming tale of a hardworking orphan girl who dreams of becoming a ballerina is fast gathering praise and high ratings.

“The film is set in Paris as it is where the reputable ballet school at The Palais Garnier Opera is located,” says Carol. “The training pupils are referred to as little rats, which artist Edgar Degas’ famous ballet sketches and sculptures are based upon. At the time of the film, it was the place to go to study ballet – it still is.”

Carol’s agency in London recently took on French director Pascal Chaumeil to make UK films, which meant that when searching for a writer in the UK, her hat was thrown into the ring. She was approached by Quad with a treatment written by directors Eric Summer and Eric Warin, whose collection of work includes the likes of French hits Heartbreaker and Intouchables.

We got in touch with Carol to learn more about her involvement as writer and creative producer in Ballerina.

Hi Carol, congratulations! Can you give us a sense of what Ballerina has involved for you?

From the first draft of the script to final edits it has been a five-year process. In 2012 I moved to Paris with my family to see it through and become a more hands-on writer and creative producer.

I have been involved all the way through over 150 drafts of the screenplay and then also as a creative executive producer – working on character design, sets, lighting, prop design, creating an animatic [animated storyboard], 3D design and recording voices.

I also voice directed Elle Fanning, Dane DeHaan and other characters in L.A. and Montreal. I oversaw a team of over 200 people all doing brilliant work at different stages of the process.

Did you visit Parisian ballet schools for film research?

We were extremely lucky to have guidance from The Palais Garnier Opera. This meant that the help of Benjamin Millepied [Black Swan choreographer], Aurelie Dupont [Director of the Opera] and Jeremie Berlingard [lead male ballet dancer] was enlisted and that gave us all the background we needed.

We also got to explore the building of the Opera itself, which is beautifully designed with Chagall murals, scary attics and a gold roof that we all stood on, complete with a river running under it.

Aurelie and Jeremie had been pupils at the school and so had a wealth of knowledge about classes, dancers and techniques. For the dance sequences, we were privileged to film them dancing and use them as models for the dance scenes. I remember sitting in the dance studio as we watched them perform just for us and marvelling at how lucky I am. 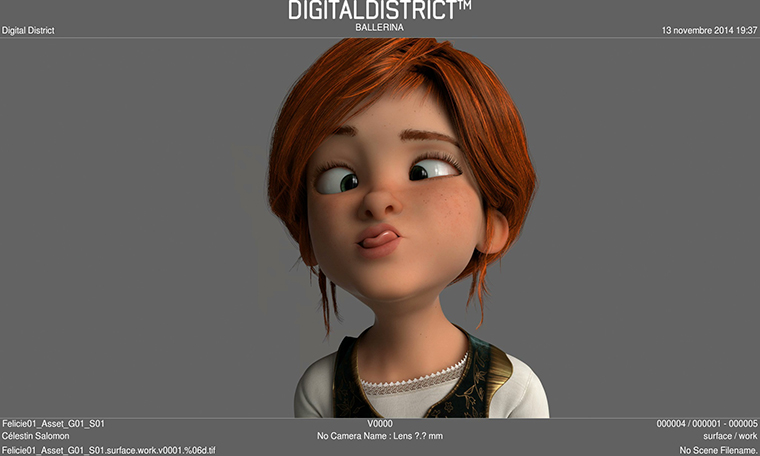 Creating the central character of Félicie

Why do you feel it was important to make a film about a young girl’s dream of becoming a ballerina?

We all believed in the central message about getting somewhere through hard work – and believe me, from the research we found ballet dancers work very hard. Real blood, real sweat and real tears.

There is a culture about getting stuff quickly, on demand and we wanted to show that artistry and excellence come with craft.

What was it like to direct actors on voice-overs?

The sound on an animated film has three stages: Rough track – I provided the rough soundtrack using myself and my workmates and this helps you get a rough time code of each scene.

The second stage was when the film had been made in a black and white 3D render. I was lucky enough to go to L.A. and voice direct Elle Fanning and then to Montreal to work with Dane DeHaan. Both were a total joy to work with, very professional, willing to try lots of crazy stuff that I set them and really well prepared. They both brought new elements to the script and our characters to life.

The other voices, Carly Rae Jepson and Maddie Ziegler, were recorded in Montreal in the height of winter where your nose freezes if you step outside for too long. 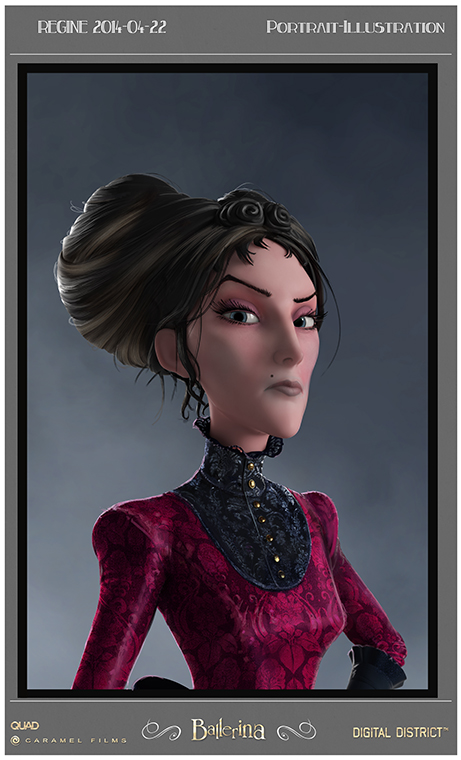 Creating the character of Regine, the mother of one of Félicie’s fellow dancers

What are you hoping for audiences to take away from the film?

We want them to laugh, cry a bit, and for the younger viewers to get the message that hard work gets you closer to your dream – a message for us all.

Were you inspired by other animation films?

I am a total animation nut! I think the animated world has upped their game of storytelling and emotion and especially the layers of comedy we have all come to expect.

My all-time favourites are Lego Movie, Iron Giant and the Toy Story trilogy. Fantastic Mr. Fox is my benchmark. Ballerina though is a mixture of the epic story of Japanese anime with the character comedy of Pixar.

I’m working on another animated film for a different studio in Paris currently at the difficult treatment stage – working out the story and how it all fits together. It’s epic, funny and as big scale as Ballerina. There might well be a sequel – Ballerina Tu-Tu!

I also completed an animated set of films for Maker/Disney studio called The Pixelarity – this is on YouTube and racking up millions of views. They took five Minecraft channel characters and made them each into a mini-episode.  I am also showrunner to a six-part young adult Scandi Noir-inspired series set in Nantucket for E4.

What advice would you give to your students wanting to pursue making an animation film?

There is great demand for animation now and the software is becoming increasingly cheaper and easier to use. Opportunities to make great stuff are there and in your own hands. I worked in TV animation for 11 years before Ballerina, making shows such as Charlie and Lola and Big and Small, so I know how big the world is out there, all wanting good content.

If you have a movie in mind then go for a great script – that is what sold Ballerina to the funders. Then work with animators on a storyboard and do this over and over to refine your story before you start spending money. Pixar spent five years on this part of the process, getting every frame right before releasing it for the next stage. Try to keep control and order of your work by using/creating your own studio. Farming out work makes communication difficult.

Any words of encouragement for prospective BA (Hons) Film and Television students?

That I started out just like you. I did the MA at UAL in screenwriting and my career took off from the moment I left.

Work at being good at what you love. I’ve basically got up every day for the last 20 years and tried to get better and better and push myself. I know that it is a never-ending process too, so a learning journey might start at UAL but it never finishes and your time here is to build the basics, the patterns and give yourself the right tools to keep on going. These are technical and creative tools and also come in human form in the shape of your fellow artists.

What has been the highlight of this experience?

Working with such a talented bunch of animators, designers, dancers and acting talent. Lots of people have put all their skill and energy into this and to be in the room with them and guiding their work has been a dream.

What was the most challenging aspect of the journey?

We made many mistakes in the pipeline – Quad Productions had not made an animation on this scale before and so we made many decisions that we might make differently now. Luckily if we make more movies we get to make those changes.

Moving to Paris was a big challenge, but one that my whole family did not regret for a single second. I have a partner and at the time a 4-year-old daughter, who is now 9, bilingual and loving the film.

The film is highly rated on the IMDB [currently 7.0 stars] – how do you feel about that and the response so far?

So far it has gone crazy and been really well received. The Weinstein Company did their test screenings in LA and – as much as I hate that stuff – it scored really highly. We have a great story, an amazing look, strong central characters and great music… so here’s hoping.

A large-scale premiere was held in Paris at The Palais Garnier Opera, followed by another in London at the Mayfair hotel. Ballerina was released in cinemas in the UK on Monday 19 December 2016.