Roshnee Desai, MA Graphic Moving Image graduate (2014) from London College of Communication, has received global attention and acclaim for her film Cover Up.

The short film illustrates the experiences of a woman travelling alone at night and the thoughts, insecurities and fears that run through her head on the way.

Roshnee was awarded Best Woman Director for her film by Women in Film and Television (WIFT) – the leading organisation recognising women working in creative media in the UK and worldwide.

Cover Up was also awarded the People’s Choice Prize at the US Consulate Short Film Festival in Mumbai. The festival was held in support of women’s safety and empowerment, and as part of the UN global campaign, ‘16 Days of Activism Against Gender-Based Violence.’ 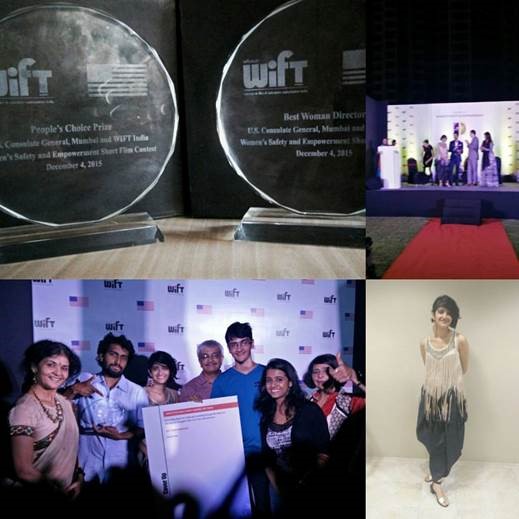 Roshnee Desai at the Women In Film and TV Awards, Mumbai.

Roshnee’s film has gained much attention from Youtube and Vogue in India, and from the BBC here in the UK. Cover Up was released on Being Indian, the popular Indian YouTube channel, and received over 120,000 views.

Vogue India also wrote and tweeted about Roshnee’s film exclusively and interviewed Roshnee as part of the feature. In the Vogue India article, Roshnee says, “after I went to study in London, I realised that our society has conditioned us to not believe in ourselves. I found my inhibitions as a woman were slowly changing and I could stop the voice from dictating me.

“I hope that after people watch this film, they start to question the validity of these inhibitions and hopefully free themselves of it.”

BBC’s Cultural Frontline aired an interview with Roshnee about her broader work as a designer, in which she talks more about the issues around Indian women travelling by public transport.

In the interview, Roshnee says, “India is one of the only few countries in the world which has separate compartments for women in trains, separate seating areas for women in buses and we also have an entire train which is only for women.

“If you are a feminist, a true feminist, you’d actually question why do we need that kind of privilege?

“I think design can make a change, or start a conversation.”

Roshnee’s latest interior design project inside a Mumbai taxi turns around the concept of female compartmentalisation in public tranpsort. Roshnee’s men-only taxi is designed to enable men to experience what some Indian women face whilst travelling.

The icon of a coy and covered up woman, which would usually signpost the women-only compartment on Indian trains, has been modified by Roshnee, with a moustache so it applies to men.

The taxi doors are upholstered with graphics of watching eyes and ogling tongues, and on the ceiling appears a chart of rules which Indian women generally follow, role-reversed. Do not wear sleeveless clothes; do not reveal your undergarments; be home by 7 o’clock; do not spread your legs whilst sitting.  In Hindi and Marathi, the chart asks: do these rules apply to men?

Roshnee comments, “The minute you see that a man has to follow those rules, even to a woman, it seems really ridiculous and funny. It makes you chuckle! “Every time I talk to the [taxi] driver, he says, people are totally getting the message and say, this is not a joke, it’s actually a very serious conversation.”

Since graduating, Roshnee has moved to Mumbai and now leads the design team for Culture Machine, a media company and multi-channel network which produces video content for the internet. As part of her role, Roshnee oversees the design, brand and build of various channels, and has recently been made co-channel director of Epified, an Indian mythology, culture and arts channel on the network.