In our second student interview feature for Reimagining Vintage Ladybird, we meet two more students involved in this LCC collaboration with the publishing icons to ask how they are tackling the live brief.

When did you first become aware of Ladybird books?

Jennicka Sapigao: This is the first time that I have encountered Ladybird as a whole, but I have seen its iconic illustrative style when I was researching for a specific College project a couple of years ago.

Grace Teo: I have a set of hand-downs which were used as lesson materials from a relative of mine when I was about seven. But I wasn’t aware they were Ladybird until the recent launch of the project. 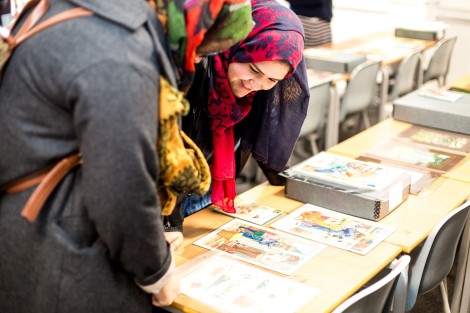 How would you describe the style of a vintage Ladybird illustration?

JS: The precision and the detail of the works are almost comparable to illustrations that are created digitally, but because they were done using traditional methods, there is the added element of a high level of craft and personality to the illustrations themselves.

GT: Semi-realism? It visualised the utopia of that era, although it would look a little satirical now. Nevertheless, the illustrations are very beautifully painted! Students present their ideas to a panel of representatives from LCC and Ladybird. Image © Lewis Bush

How are you tackling the challenge of updating such a classic brand?

JS: I think that collaboration plays a big part in these kinds of projects because the project has to be approached from different angles. These varying views help in the generation of innovative ideas that could reimagine a brand as strong as Vintage Ladybird.

GT: I thought one thing that remained constant throughout was our need for information, and Ladybird’s series did very well in translating that in their non-fiction/educational series.

Thus, updating the ‘information’, I chose to work with the ‘How It Works’ series as a starting point as it is usually about the advanced technology of the time. I felt that it recorded a part of our development in technology.

We so often know how to use this technology but not the mechanics behind it — thus, it could be interesting to update with titles like ‘How It Works: The Internet/3D Printer’, featuring a new look but retaining the beauty by hand-painting them. 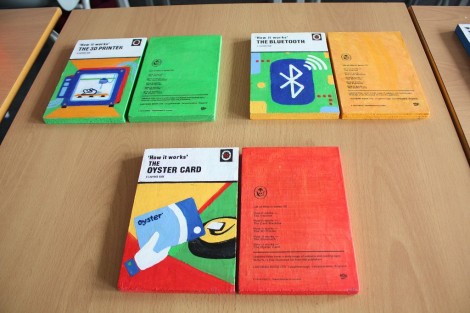 What are the influences which are inspiring your Ladybird work?

JS: As a group working on this brief, we really wanted to focus on the culture of Vintage Ladybird being accessible and engaging to a variety of audiences. Our interactive puzzles work around the idea of juxtaposing the Ladybird archives with bespoke imagery generated by the audiences themselves.

GT: My main influences comes from the current graphic trends — infographics and flat design aesthetics – as I thought the infographics that we see so frequently have the same function in visualising information effectively and would look refreshing with a visual update as well. 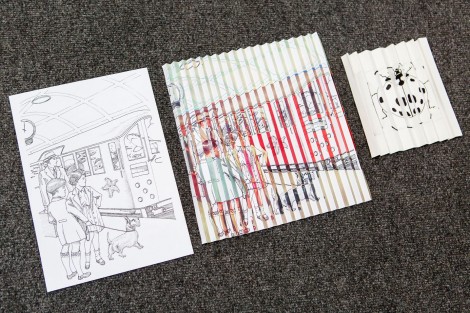 What has been the most enjoyable part of this project so far?

JS: The most exciting part so far would be working in a team and also involving our family and friends to test out our designs.

GT: Definitely experimenting with different materials and mediums like painting the graphics onto wood blocks with acrylic paint.

And the greatest challenge?

JS: The greatest challenge was that this brief was an optional brief and we had to commit ourselves and our time to really develop our ideas.

GT: It was tempting to want to click on cmd+z! 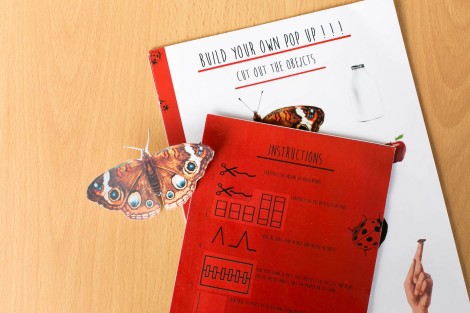 What would you say to an LCC student thinking about getting involved in a similar live brief?

JS: I would definitely get involved in a similar project because it has opened another subject of interest to my personal journey as a designer and a creative in general. 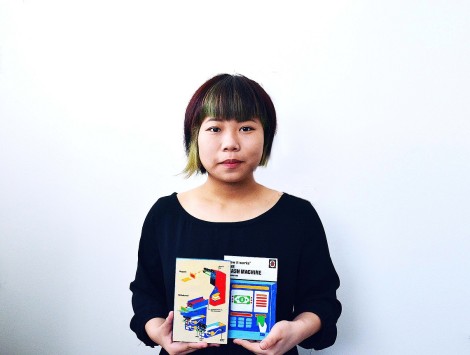 Grace Teo with part of the ‘How It Works’ series.

View Flickr images of the presentations and the work

Read more about the project