Ken. To Be Destroyed – behind the exhibition // Q+A with artist Sara Davidmann and curator Val Williams

LCC is delighted to present ‘Ken. To Be Destroyed‘ as part of its public programme of events and exhibitions. The exhibition, which is part of the Moose on the Loose Biennale of Research, will run Friday 17 February – Saturday 26 March 2017, with a Private View on Thursday 16 February, and will be accompanied by a series of events, talks and workshops.

We caught up with the artist Sara Davidmann and the show’s curator Professor Val Williams to find out a little more about the work that will be on show, their collaboration and some of the processes behind the project.

Can you tell us a little bit about this exhibition? What are the stories and contexts behind the project and what work will be shown?

The project began with the discovery of a family archive collected by my mother, Audrey Davidmann. This archive tells the story of Ken and Hazel Houston, my uncle and aunt, and how four years after they were married, in 1958, it emerged that Ken was transgender.

The archive contains letters, photographs and papers. Hazel and Audrey wrote to each other frequently in the late 1950s and early 60s, after Hazel discovered that Ken was transgender. These letters tell Ken and Hazel’s very private story. For the public Ken was a man, but in the privacy of the home Ken was a woman.

This exhibition includes new works, including ‘Archive’ a collaboration with LCC’s Graham Goldwater. It also includes previously un-exhibited and un-published works in both ‘The Dress’ and ‘For Ken’ series, and a new projection. 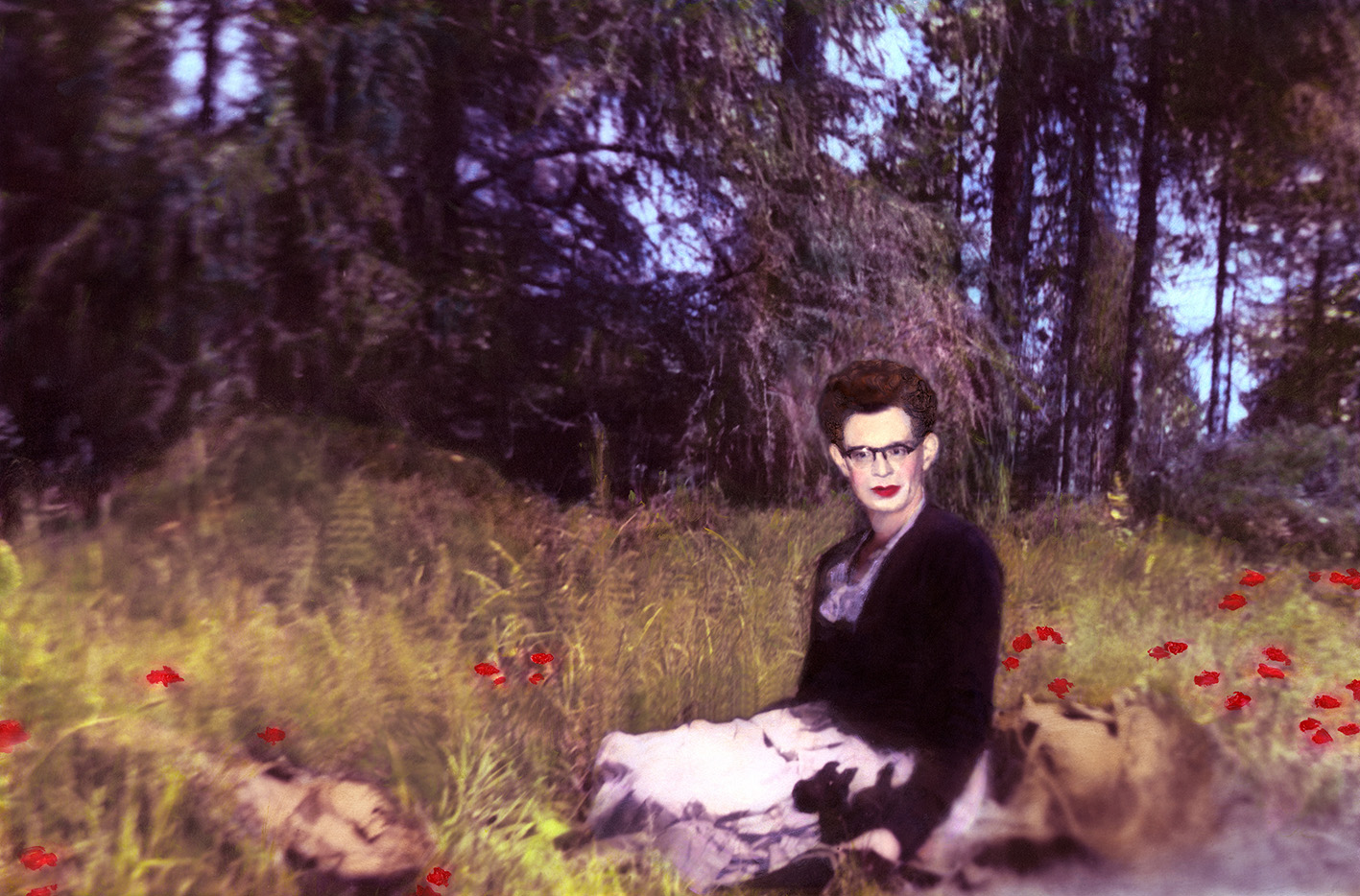 K at the roadside between Inverness and Culloden Moor. From the series Looking for K/Finding K, 2015. Sara Davidmann.

This exhibition opens during LGBTQ History Month. To what extent is your art practice and research trying to raise awareness and encourage social change?

Since 1999, I’ve taken collaborative photographs and recorded oral histories in trans and queer communities in the UK. Much of my research has been underpinned by a desire to raise awareness and generate greater understanding, in particular in relation to trans people’s lived experiences. The ‘Ken. To Be Destroyed’ project looks at the family, relationships between people and society, and trans history. I would hope that this project might encourage understanding that trans people have a place in the family, in relationships with others, and that they have a history.

Can you tell us about how you navigated your desire to investigate this personal project with the fact that you couldn’t directly get permission to publicly explore Ken’s gender identity after his death? And can you speak more generally about some of the challenges and rewards of handling a personal archive?

Working with family histories and family memorabilia one encounters many interesting issues – but perhaps, at least in part, it is the difficult issues and questions that make this work so interesting. The fact that the four main players in this story were all dead meant that I had to carefully consider decisions that in different circumstances might have been answered by other people. 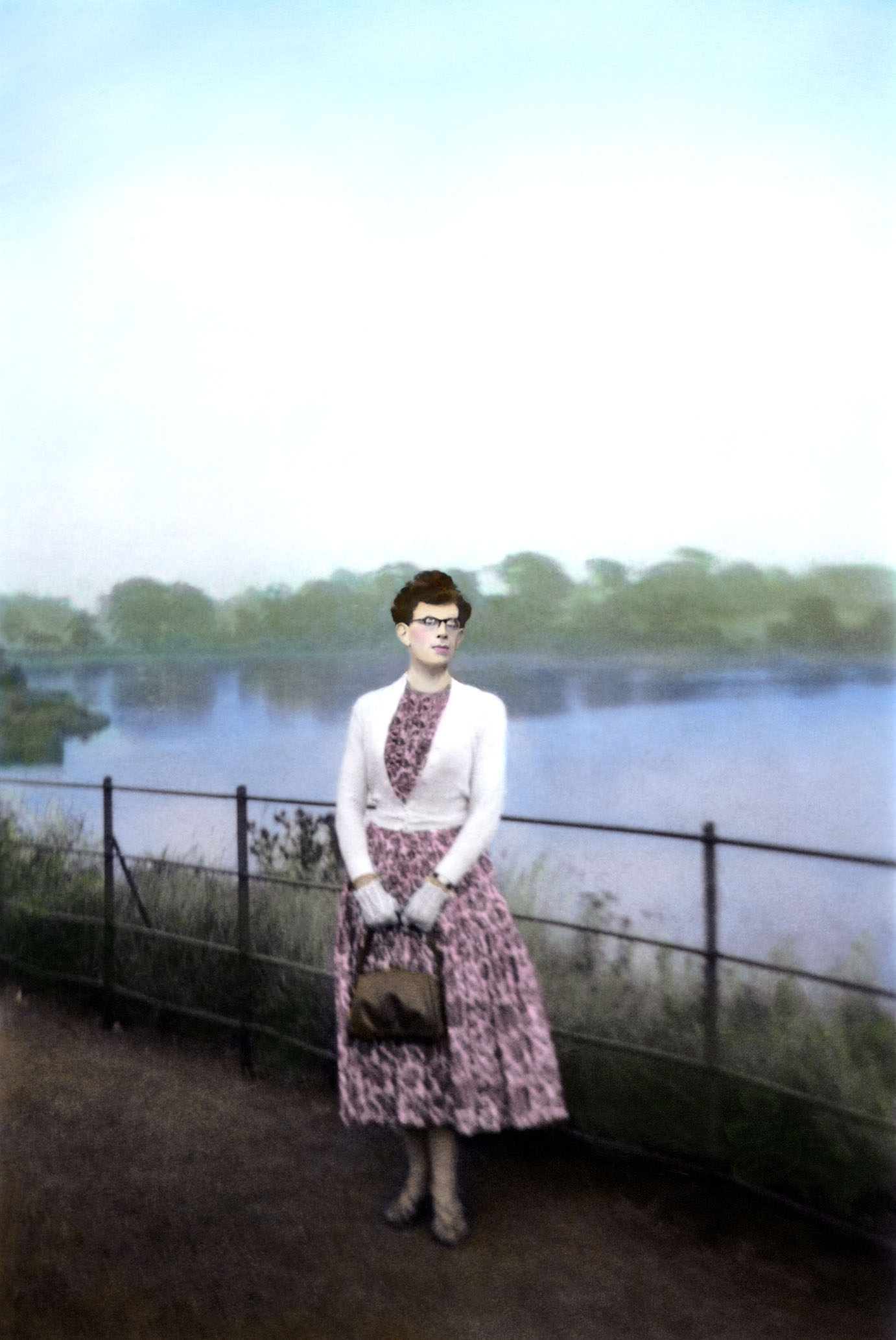 K at Duddingston Loch. From the series Looking for K/Finding K, 2015. Sara Davidmann.

Can you talk a little about the process of creating the work?

This is the first project where I’ve worked with family photographs. Looking at the photographs I was acutely aware of their surfaces. Mould, scratches, thumbprints and rips were visible, and the marks of time and damage had become part of the images.

I began by re-photographing the pictures. The surfaces of the vintage prints led me to work on the surfaces of the photographs I produced with inks, paint, magic markers and correction fluid. I also worked digitally and created fictional images. These were then produced as negatives, allowing me to print in the darkroom. Using chemigram processes I applied developer, fix and photographic bleach as if they were paint, disrupting the image I had made in the negative. Using a combination of digital and analogue photographic methods gave me the freedom to interpret the archive and use the material from it in ways that I could not have anticipated at the beginning. Sometimes the processes led the outcome and at other times elements of chance meant that the results took me by surprise, which in turn gave the project a life of its own.

What do you think Ken would think of the show, and how much has your sense of Ken’s opinion driven the direction of the work?

I very much hope that if Ken was alive that he would approve of my work and that he would be pleased by the fictional photographs in which I have tried to visualise how he might have looked as a woman. How important was it for you to work collaboratively with Val on this specific exhibition?

I am a member of the UAL Photography and the Archive Research Centre (PARC). In 2014 Professor Val Williams, Director of PARC, invited me to have an exhibition of the project in PARCspace. This was the beginning of our collaboration. Val edited a Fieldstudy on ‘Ken. To Be Destroyed’ which was published to accompany the exhibition. We then began working together on the ‘Ken. To Be Destroyed’ book which was published by Schilt in 2016 and on the 2016 Schwules Museum exhibition.

Collaborating with Val Williams has been an absolutely remarkable experience. It’s been wonderful to have Val’s perspective and truly unique vision on the project. The exhibition that you will see at LCC would not be as it is without Val’s input. Curators and writers on photography are often less visible than photographers – but the work that they do, the work that Val does, is vital and should not be underestimated. Val’s decisions are based on a vast knowledge of photography and on her years of experience in curating significant photography exhibitions.  It has been incredibly important for me to work with Val. The ‘Ken. To Be Destroyed’ book, the Schwules Museum exhibition and now this new exhibition at LCC are all outcomes from our collaboration.

What would you like someone who comes to see the exhibition to take away from it?

I would hope that the exhibition would make people think.

How did you first find out about the project and what made you want to be involved?

I saw a small piece about the project on social media, and I was very intrigued by the story and by the way that Sara had come upon the archive.

You’ve been working with Sara on ‘Ken. To Be Destroyed’ in various different ways – a book, several exhibitions etc. What is exciting about this particular exhibition from your perspective?

The exhibition has had a number of iterations since I became involved- a very small show at PARC originally, then a larger show at the Schwules Museum in Berlin last year and now this one at LCC in which we’re using much bigger scale prints and focusing particularly on Sara’s work with Graham Goldwater when they photographed the actual objects in the archive. 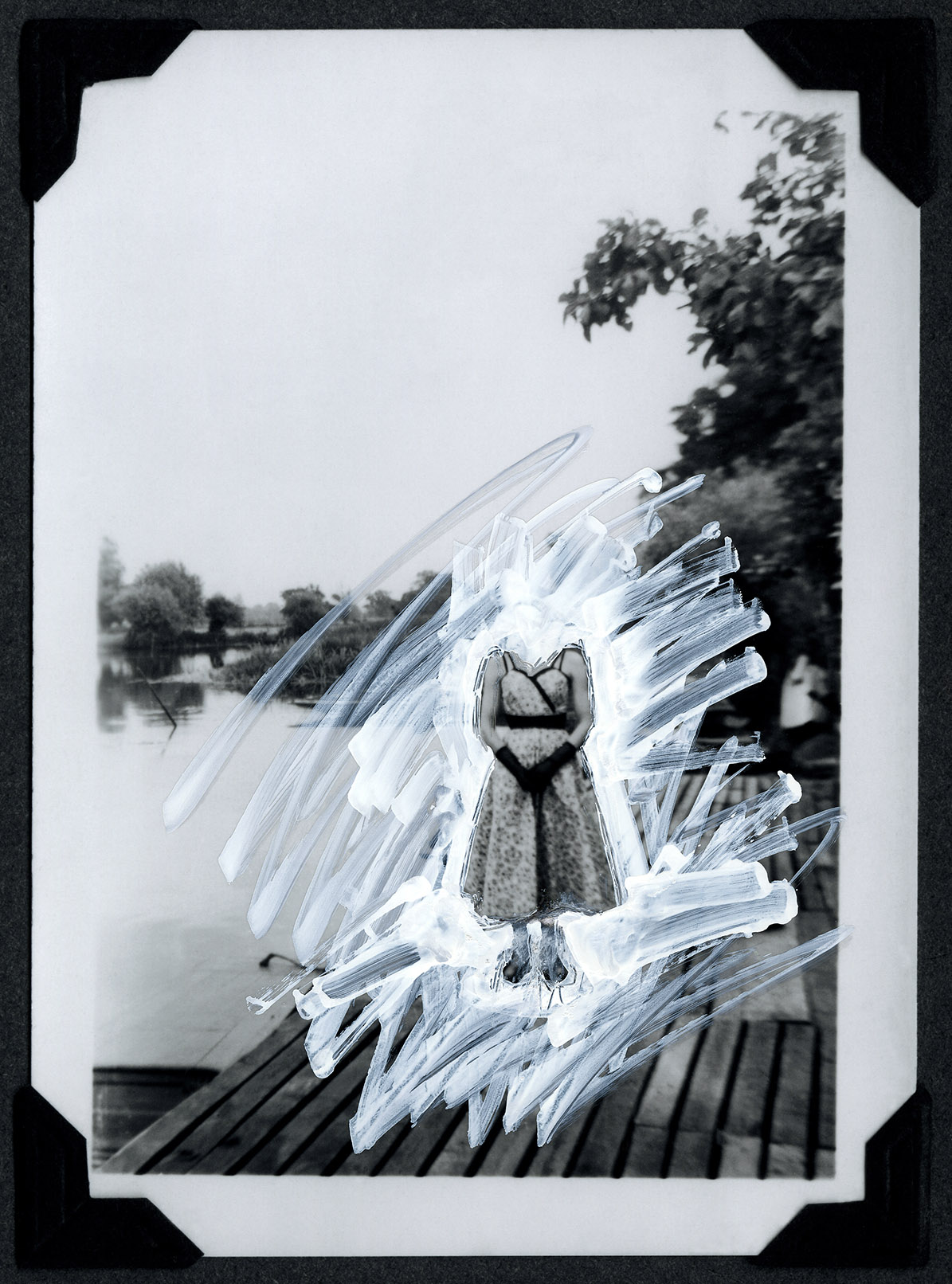 What are some of the challenges involved in curating a show on this scale?

The challenges are mainly technical- making sure that prints of this size can be displayed effectively, dealing with the fact that it is an open space without invigilation.

Can you tell us a little about the process of creating your own archive, with Sara, for the ‘Ken. To Be Destroyed’ project. Why was this an important thing to do and how does it tie in with your research practice?

I suggested to Sara that we should make an official archive of the material we had collected during the making of Ken and the process during the design of the book, which was complex and took a lot of time. For me, in my research practice, it is very useful to create a new resource which will enable us and others to look back on the process. This exhibition has been supported by PARC, can you tell us a little about what PARC does and what is going to be exhibited in the PARCspace as part of this project and Moose on the Loose 2017.

PARC has been established since 2003 and it has a number of remits, some of which are: to support and initiate new research ; to support and mentor its members and others in the research community; to act as a launch pad for new work and explorations of archival work in the PARCspace. We will be exhibiting two sets of work which reflect on Ken in the PARC space in March- a selection of objects from the Ken Project Archive, plus the Moose Commission which will be new work by Alexander Cooper in letterpress, reflecting on ‘Ken. To Be Destroyed’.

What would you like someone who comes to see the exhibition to take away from it?

A great family narrative and also an understanding of LGBTQ+ issues in the 1950s and 60s, when they were so little discussed. Letters and Papers. From the series Archive, 2016. Collaboration with Graham Goldwater. Sara Davidmann.

Find out more about ‘Ken. To Be Destroyed’.

Find out more about Sara Davidmann.

Find out more about PARC.