Bayley’s lecture on the VICE vision of journalism was hotly anticipated by many – the audience ranged from UAL to City University and even Bristol University students. Everyone was intrigued to get an insight into the most provocative magazine in the country.

Since the time of its establishment in the UK in 2002, VICE magazine has undergone a lot of changes. It’s gone from being a magazine “hated for its humour” to being innovative in the way news and pop culture is covered.

“A part of my job is to make the magazine better without making it a different magazine. So, it’s about balancing, keeping that tone and the things people liked about it but actually improving the quality of it: better writers, better photographers,” said Bayley. 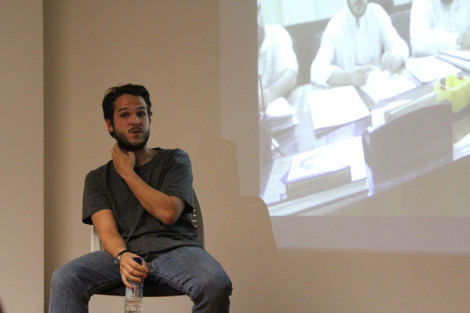 Bayley believes the video content on VICE has helped massively to change people’s perceptions about the magazine. A recent documentary about the Islamic State is one example.

“When I started working at VICE, there were only a few serious articles, but now we have documentaries and even a news channel. A lot of people will be surprised how VICE has changed.” 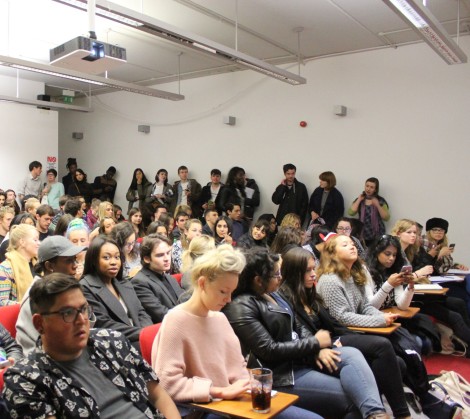 VICE is known for championing the “immersionist” school of journalism and Bayley stressed this throughout the lecture: “I’d rather commission a story when someone says ‘I’m going to go to this place and do this’ rather than pieces written from a removed situation. Be immersive as much as possible.”

So, how do you get a job at a publication like VICE? Bayley recommends being proactive and useful in the workplace and doing as much work as possible.

“A lot of the journalists were interns who did well and then became regular contributors, usually progressing from the online version and then writing longer features for the magazine.”

Internships are advertised online throughout the year, giving opportunities to work for one of ten channels. Bayley himself started by writing reviews and conducting vox-pops for VICE in 2007.

Good engaging ideas are a part of the magazine’s DNA. Bayley explained: “We like to cover things that either other people haven’t covered hugely, that people wouldn’t read about elsewhere, or cover a story in a slightly different way.”

Many still accuse VICE of being too biased in comparison to the mainstream media. Obviously, objectivity is the goal of any serious publication and VICE is not an exception:

“We try to be unbiased. For example, in the Syria issue, we had an article written from Syria by pro-regime and rebel people. It’s a good example to show that we try to be as representative as possible, showing different sides.”

Founded as a fanzine in Montreal in 1994, VICE now distributes a free monthly magazine in multiple languages in 29 countries. Its ten vertical content channels cover various topics from food to technology.

In 20 years, VICE has become a global success, engaging millions of young people across the world.

Read a review of ‘BBC News and the Digital Future‘