Joseph Ollman and Aaron Dunleavey, current BA (Hons) Film Practice students, were recently nominated for the BFI Futures Best Director award for their film, Throw me to the Dogs.

The film was also featured as a Vimeo Staff Pick and selected by a number of festivals including the London Short Film Festival, Aesthetica Film Festival and the Cork Film Festival, winning awards for Best Young Filmmaker at the Shuffle Festival (judged by Danny Boyle) and Best Picture at the CortoLovere Film Festival in Italy.

Throw Me to the Dogs was made on a shoestring budget in the northern town of Blackburn with a local cast of non-professional actors. Though loosely scripted, the acting is entirely improvised.

The film features a troubled teenage boy who becomes victim to bullies living on his estate. When his father appoints himself football coach to the gang, the boy is left to deal with the bullies in his own way.

We chatted to Joseph about the film:

Congratulations on being nominated! Can you tell us a bit about the concept and themes behind Throw me to the Dogs?
Although it was Aaron and I who were nominated for the Best Directors Award, we had an amazing crew and wouldn’t have been able to make the film on our own. We had input from Helena Lageder, Sam Travis and Christopher Spurdens as producers, cinematographers, sound designers and sound recorders – it was a massive collaborative process.

The plot came from some of Aaron’s experiences growing up as a kid in Blackburn, and we based the characters on some of the people we’d encountered independently throughout our lives.

The film is about your typical ostracised kid being picked on by bullies, but when his father is thrown into the mix, it’s about what happens when these two worlds collide.

Some of the main themes we wanted to cover were the difficulties of growing up, abandonment and the tribal mentality of groups living on estates. But it’s ultimately about the brutality of boyhood.

Your film has deeply regional roots – do you think it’s particularly resonant for northern audiences?
Although the setting, dialect and everything else about the film’s production is very regional, I think its themes are pretty universal.

We’ve shown it at festivals in different countries where Italians, Americans, Danish and Swedish people have come up to us and really understood what the film is about. I don’t think it would have gained such recognition if it only had regional relevance. Throw me to the Dogs’ main character.

How did the award come about?
Aaron did quite a lot of the awards and festival submissions for the film, but it’s quite amazing to be picked up by the BFI – there are so many films which get submitted for that award.

We were also selected for festivals in Cork, London, and the CortoLovere Film Festival in Italy, which was pretty cool. We were staying in a five-star hotel and thinking, what the hell are we doing here?!

Macaulay Culkin’s brother, Rory Culkin, came up to us after the screening and said, “Dude, I thought at the end, he was going to pull out a gun!” which we thought was ridiculous, but I guess that’s what makes the film very British. We weren’t addressing guncrime and the type of violence that Americans are probably used to seeing.

Did you plan to make a film that you could submit for awards?
We never thought the award nomination would come out of it, we just wanted to try and make a good film and do well in our uni project. We had aspirations for the film but no high hopes, which is probably what made it so organic. In hindsight, I think that’s a key mindset to have when making films.

Now, in the current project I’m working on, I do feel the pressures of the success that Throw me to the Dogs received, and it can be a bit destructive to the creative process.

Did you face any challenges?
Yeah, there were quite a few! We nearly got shut down about a week before the shoot, because we underestimated the processes involved with using children as actors.

We needed to get licenses from the local authorities and confirm that the kids would only be working a certain amount of hours. We had to find bit of extra money to get a chaperone for the kids, and the original script had a lot of violence and swearing in it, so we had to modify it to get approval.

What directing methods did you use?
The film was entirely improvised, but we started with a story in mind and wrote a loose script. We only let the older lead actors see the script, but didn’t show the younger kids. 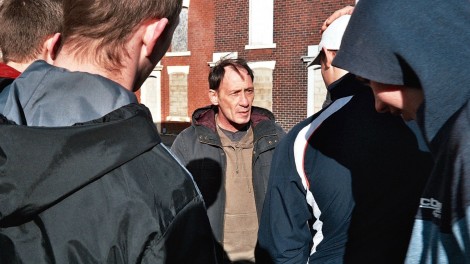 Still of father confronting the bullies in Throw me to the Dogs.

Aaron and I worked with different sides of the cast when setting up each scenario, keeping direction very general and watching how it played out. Sometimes it went pear-shaped, sometimes it was brilliant.

There was this one shot where we surprised the kids – we told them to run down an alley, but didn’t tell them someone was going to jump out, so their reaction captured on film was completely natural instinct!

We’d not really tried this way of working before, but it’s kind of what Shane Meadows and Ken Loach do. Aaron and I are both huge fans of their work, so we gave it a shot and it turned out pretty well. Especially when working with kids, it’s a great way to direct.

Is directing ultimately what you want to do?
I want to make my own films and I’m really lucky that I’ve had the opportunity to do that, so far.

Every film you make is a massive learning experience and if you are working as a director, you get to oversee and dip your toes into every aspect of the film, but don’t necessarily get into understanding the specifics of each role, which is both enabling and limiting, in a way. You never really get down and dirty as a director!

But I’d say, try out as many roles as you can within filmmaking and get a broad expertise. It will make you a better filmmaker overall. Be ambitious and don’t expect to make a perfect film straight away. BA (Hons) Film Practice gives you the opportunity to explore and make mistakes, so don’t punish yourself for making them.