With Daniel Meadows’ first retrospective, Early Photographic Works, on show around the College until Saturday 31 October 2015, we caught up with the photographer and digital storyteller to find out more about what inspires his practice.

What is the earliest memory you have of your interest in photography?

It was in the cold winter of 1962-63. We lived in the countryside and were quickly snowed in. Soldiers came with a bulldozer cutting through the drifts, like Moses parting the Red Sea.

I was ten years old and on my Christmas holiday. I went out with my mother’s box Brownie, normally reserved for beach scenes in summer. I took a picture of the gamekeeper, a twelve-bore shotgun broken over his arm, standing beside a pile of snow like a modern-day prophet.

Was it an easy decision to study photography over any other subject?

What I wanted was an adventure in other people’s lives but there wasn’t a course for that and anyway I didn’t have enough qualifications for university.

Then I saw the Bill Brandt show at the Hayward Gallery in 1970 and I was blown away by the way he used photography as a tool for slipping between the social classes. Which is what I wanted to do.

The camera was his passport. So I got a camera of my own and took myself off to college to learn how to use it. 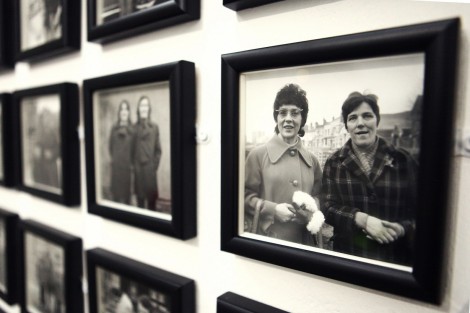 You were born in Gloucestershire – did you grow up there? What impact did the places of your childhood have on you?

I don’t think of Gloucestershire as being where I come from because I was hardly there. My parents sent me away to boarding school when I was eight and that’s where I grew up.

It was a poor experience mostly. Ten wasted years really. The teachers certainly taught a lot. But I didn’t learn much, except perhaps something of what it means to be English. 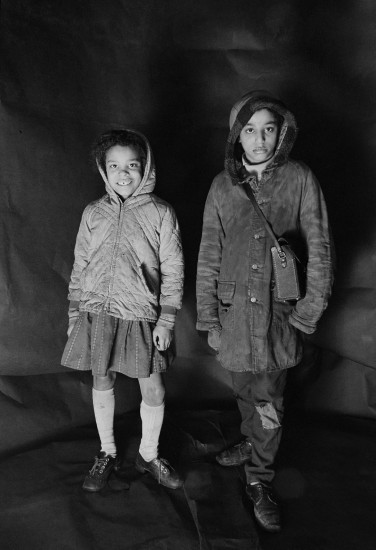 Two of the projects featured in your exhibition here are The Shop on Greame Street and the Free Photographic Omnibus – what motivated them?

I discovered that running free portrait sessions in the communities I wanted to photograph was a great way of getting to know people.

The first experiment was my shop, a former barbers’ in Moss Side, Manchester. The area was being demolished and I wanted to photograph the community before it was broken up.

The bus came 18 months later and was a development of the same thing, only this time it was on wheels. I’d seen Cliff Richard in Summer Holiday, that’s where the idea came from.

It took a year to raise the money for the bus project, writing ten letters a day seeking sponsorship from captains of industry and cultural gatekeepers. 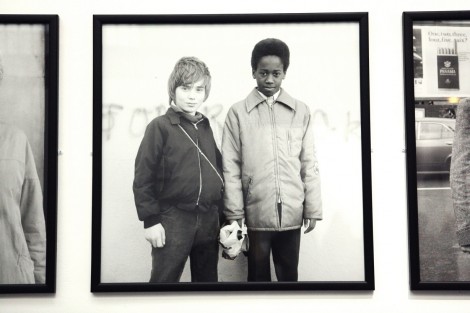 What reactions did you receive from the people whose portraits you took?

Happy ones mostly – after all, I was giving the pictures away. However, portraiture wasn’t my main goal.

The point of the so-called “free” portraits was to get to know people so that I could go home with them, or to their place of work and so on. Mostly at the time, apart from the people in the pictures and their immediate family members, no one took much notice of the portraits. It took twenty-five years for them to be “discovered”.

Many of my own favourite pictures were taken in the years immediately after the bus adventure, when I was employed as artist-in-residence to the borough of Pendle in Lancashire.

Some of these stories are represented in the LCC exhibition as digital stories, and Café Royal Books published them earlier in the year as zines. A lovely job, particularly the boxed set which includes a DVD. You can see my movies on Vimeo. Whose work inspired you as a student, and who inspires you now?

Oral history was important: Charles Parker’s Ballad of John Axon, done for the BBC, is a great favourite. And Singing the Fishing. Also the books of Tony Parker. Philosophically my guiding spirit has always been Ivan Illich, in particular his 1973 book Tools for Conviviality.

Current inspirations include: Niall McDiarmid’s portraits; Dana Atchley’s digital story Horse-Cow; and the work of the West Midlands community arts set-up Multistory for whom I have recently completed a 23-minute movie.

Ephemera on display in the LCC exhibition. Image © Zephie Begolo