How can we create accessible spaces for dialogue around the changing concepts of our gender and sexual identity?

On Wednesday 22 March, LCC welcomed five panellists for a discussion on the subject of creating new spaces for dialogue around LGBTQI+ concerns.

Hosted by Denise Ackerl, who is currently undertaking a PhD at Chelsea College of Art, the panellists discussed how broadening the scope and space for open dialogue can create a more meaningful understanding of LGBTQI+ issues and concerns.

From large arts organisations to smaller, home grown initiatives, the panel gave LCC students, staff members and the public the opportunity to discuss the challenges, successes and visions for the future in the context of the ever-evolving conversation around LGBTQI+ creative spaces.

Denise began by introducing herself and the panellists, giving the audience a short description of her own project, entitled ‘Space for Failure’. A space intended for the open and frank discussion of queer artworks in progress, Ackerl’s ‘Space for Failure’ is an initiative promoting experimentation and testing of feminist/queer performance concepts. 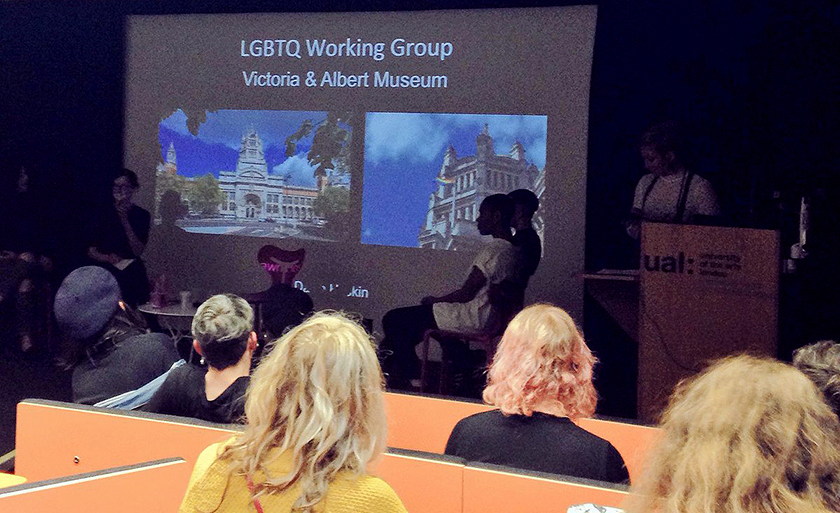 Dawn Hoskin, Assistant Curator at The Victoria & Albert Museum and Co-Chair of the V&A’s LGBTQ Group, kicked off the evening with a short presentation, focusing on how the V&A’s LGBTQ Working Group aims to “facilitate understanding of LGBTQI+ identities and histories within the context of the museum’s activities”, whilst simultaneously broadening the LGBTQI+ community’s visibility and accessibility within the prestigious institution.

Dawn outlined the way in which the group’s focus on public programming has so far resulted in the broadening of audiences, and brought new, thought provoking perspectives and experiences to traditional V&A shows. She spoke on the notion of the LGBTQI+ community recognising ownership of a space like the V&A, and being able to celebrate a legacy beyond specific LGBTQI+ events; reassessing ownership of a space as culturally significant as the V&A.

She ended her presentation by offering the audience an overview of upcoming LGBTQI+ themed events at the museum. These include LGBTQI+ Gallery Tours, which have been running since April 2015 on the last Saturday of each month. Each volunteer tour-leader highlights their own take on the objects they’ve selected and explains its personal significance to them in the context of gender identity and sexuality. Dawn went on to announce a V&A Friday late which will coincide with Pride next year, and teased the possibility of a full LGBTQI+ themed exhibition which is set to arrive at the V&A in the next two years. Felix Lane took the stage next to introduce the project he co-directs: Open Barbers. The project began as a monthly pop-up 6 years ago, and is now a full time salon and social space, with its own premises in Hoxton. Felix explained the sliding scale pricing system on which Open Barbers operates – customers pay what they can afford in accordance with their means, with no price variation for different lengths of hair or style.

Aside from functioning as a gender-neutral salon, Open Barbers simultaneously exists as a social space, which is sober (with no consumption of alcohol or drugs permitted on the premises), completely free, and fully wheelchair accessible. The aim is to eliminate the feeling of intimidation often felt in salon and beauty-related spaces, creating parity between hairdresser and client, opening a space for dialogue for people that identify with any gender or sexuality.

Next up, Charlie Craggs introduced her project Nail Transphobia, which began during began during her time as a student at London College of Fashion. Charlie explained how she travels around the country offering the public free manicures in exchange for the chance to sit and chat with a trans person in a safe, non-judgemental space.

When she started the campaign in 2013, she explained, it was at time when you heard very little about the trans community, and often what you did hear was mediated through television or print media. “I just wanted to make things a bit more human,” she explained, “because I feel like people didn’t understand that we’re all just the same.” Charlie encourages members of the public to ask her any difficult questions they might have about being trans, in a context that is both casual and friendly, putting herself on the line to serve as a force for positive change and education. 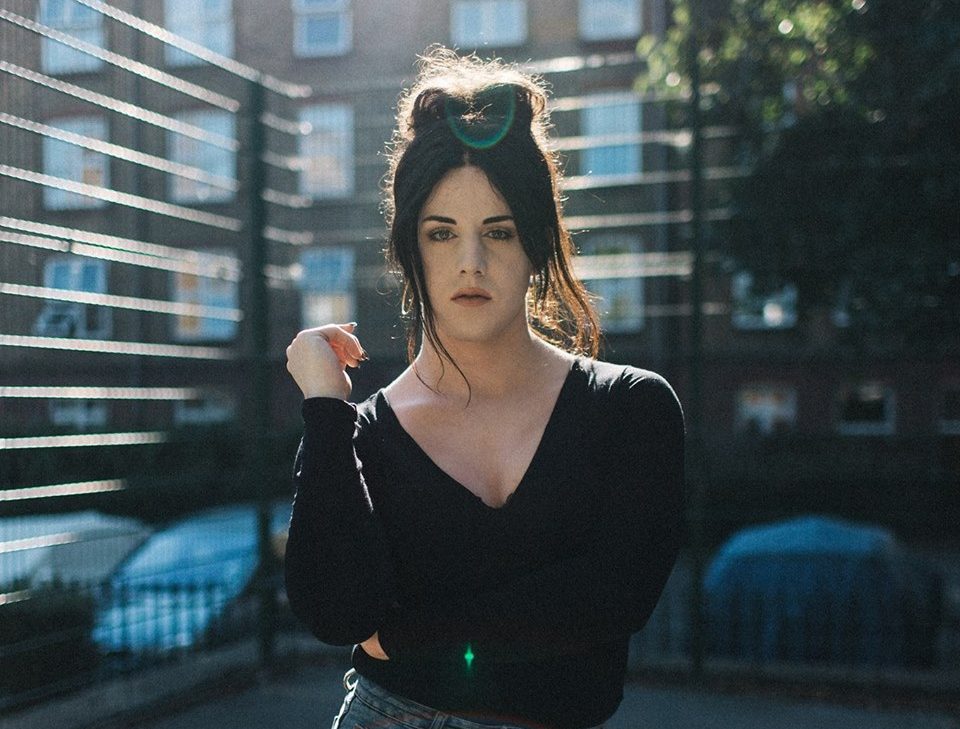 Finally, Nadine Davis introduced the BBZ Collective, the monthly exhibition and dance party she co-founded, which is centred on “positive femme identity and eradicating misogyny for creative queer women and genderqueer people of colour”.

She spoke of how returning from San Francisco highlighted the lack of recreational nights geared towards members of the queer, creative community, and how she and her partner came up with BBZ to fill that gap. “As a black, queer woman,” she explained, “the only space really designated to us in London is a small macrocosm of Vauxhall. When I came out and started going clubbing, it wasn’t easy-going. It was hard work.”

BBZ is not, however, a space for people to come and be educated – it’s entirely recreational – but it gives people cause to question why they might need to be educated, and inspires them to educate themselves. Denise posed her first question to the panellists: what can we do as big institutions to make our public spaces more accessible for the LGBTQI+ community?

Felix explained that accessibility can never be a singular checklist, but rather, must be viewed as an on-going conversation and continual dialogue between institutions and their guests. Access too, can’t simply be considered in physical terms. Felix explains that issues of accessibility can have financial, mental and physical aspects, which must each be treated with equal weight and importance. Charlie added that issues of accessibility come down to listening – more specifically listening to the people who occupy your spaces, and understanding how you can make them feel their most comfortable. 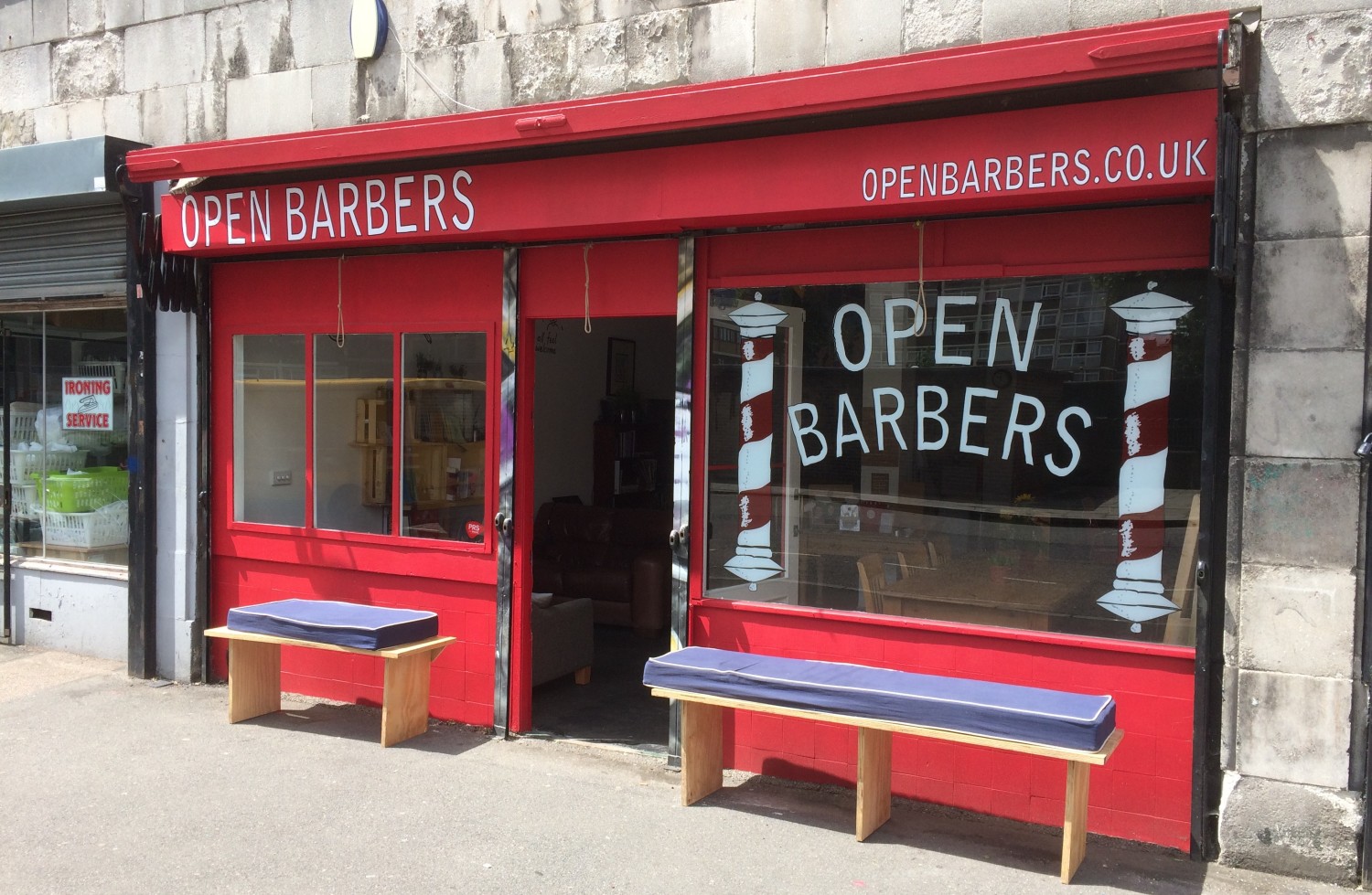 When asked about the relevance of the online sphere, Nadine highlighted the importance of the digital space in furthering LGBTQI+ dialogues, and how the internet has allowed her to have further reach within her community.

Felix agreed, adding that online communities are crucial in helping to spread the word to people that are more isolated or don’t live close to London. He explained that, in the broader trans community, support in the form of personal anecdotes or non-medical advice is widely available, and sometimes much easier to come by, online.

“On a personal level,” added Charlie, “I don’t even think I’d be here if it weren’t for online spaces and online resources for queer people.” She explained that when YouTube began and trans people were able to tell their stories in a more accessible, open online space, it provided her with an incredible source of comfort.

Overwhelmingly, the theme of the panel was on understanding, developing and opening up new spaces to encourage dialogue around LGBTQI+ issues. Focus was on ensuring that larger institutions are listening to the needs of their guests and that individuals are working together to stand up for LGBTQI+ rights in the UK.

As summarised by Dawn, “even if you aren’t able to attend specific events or exhibitions, sometimes it’s amazing just to know that those things are out there and are happening around you. There are so many amazing new initiatives going on, it’s just heartening to know that there are new, safe spaces that members of the LGBTQI+ community can go. It means a lot.”

This attitude was shared by the panellists who were representing smaller initiatives such as Nail Transphobia, Open Barbers and BBZ, all of whom called for more conversation, more open dialogue and the creation of more dynamic, innovative spaces for the LGBTQI+ community to take ownership of.