His work has been exhibited internationally and has been featured in publications such as National Geographic, The Sunday Times Magazine, The New York Times, and the Guardian.

One of his biggest projects involved walking along the route of the controversial proposed HS2 railway, following the route from London to Birmingham and photographing people, buildings and landscapes along the way over a course of several months. ‘Walk the Line’ was published by The Sunday Times, and is viewable here. 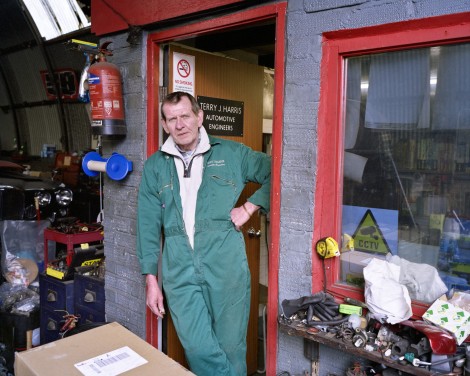 “This project I found the most enjoyable of the last few years, because it involved a bag of film and starting less than four miles from my house. It was a local issue to me, and that’s also something that’s really under-covered in journalism. You don’t need to fly to Timbuktu to shoot a great story, there can be quite poetic ones nearby.”

But while Toby has been successful in the field, it’s not an easy career to be involved in. “It’s really quite nasty out there, I’m afraid,” he told students currently studying photojournalism at LCC.

“I would really encourage you to learn what you can about the industry and try and get in it. But I would also really just do the photography that you want to do, and then see how it fits into the industry as well. Think outside the box.”

When we asked about any further advice for students, he added that “the biggest advice I’d have is just to know your subject matter and know your marketplace. Just do research.”

But most of all, it’s important for photojournalists to mix commercial, artistic and journalistic work. “I still refer to myself as having a three-way mix of a commercial approach, a contemplative approach, and journalism. I don’t think I could survive without doing all three at the same time, and I would never want to lose any of those approaches.”

Toby Smith is currently working on several new projects, including the second part of his HS2 feature and coverage of the burgeoning private space industry.