When we think about activism, we usually think about protests and boycotting. We rarely think that activism can have a creative aspect to it. So it was intriguing to find out about the creative methods that can be adopted in activism. 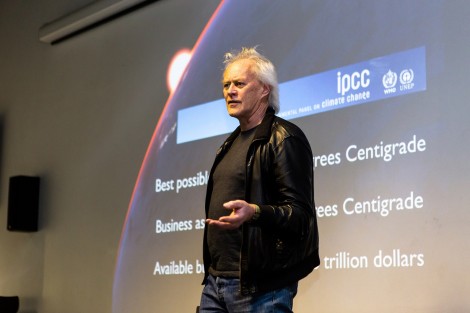 The first speaker at the lecture was David Buckland. Buckland created and now directs the Cape Farewell project, helping to bridge the gap between artists and climate scientists.

Buckland showed a moving short film that included poet Lemn Sissay. As Sissay chanted “What if we weakened ourselves getting strong?”, his powerful poem assisted by violins was a moving display. This showed that activism could be something as beautiful and artistic as poetry.

The next speaker, Tony Credland, a Senior Lecturer and Lead Tutor at LCC, showed the vibrancy of activism. Credland is involved in Reclaim the Streets. RTS was developed in the mid-nineties and is a collective that champions community ownership of public spaces. Credland also described Reclaim the Streets as a critique of the capitalism that was driving the destruction of the climate. 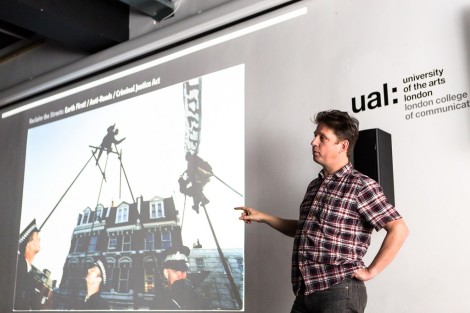 When the conservative government built new roads, RTS responded by throwing a street party. They blocked traffic for hours and their street party involved debate and discussion.

A defining feature of RTS’ street parties was the use of masks. The colour-coded masks helped to evade police but also share an important message. The masks made the protest less about the individual and more about the cause.

RTS said, “By wearing masks we show that who we are is not as important as what we want. What we want is for everyone.”

Reclaim the Streets did not just protest through street parties, they also distributed papers. RTS created a mock newspaper Evading Standards, a spin on London’s free paper Evening Standard. Twenty thousand copies of Evading Standards were given out.

This method of making mock-ups of popular brands is not unique to RTS. The following speaker, designer Paul Hamilton, also mocked up images in a project with Greenpeace. The Killer KitKat campaign was a mock-up of KitKat’s billboard. The image was so convincing that Nestlé thought that there were actually KitKats with the name Killer on them. The reason behind the campaign was that Nestlé were destroying rainforests and therefore endangering orangutans.

They were put up as banners and in the nearest railway station to Nestlé’s headquarters in the UK. The campaign also forced Nestlé to drop the palm oil which was endangering the animals.

The Creative Activism lecture showed that when creativity and activism joined forces, amazing things could happen. Attendees were made aware that creative people have a role to play within environmentalism.