Turner Prize-winning artist and UAL Chancellor Grayson Perry visited our recent Design School Show to see the latest offering from our final year students and to find out more about their work.

We caught up with some of the students he spoke with to find out more.

For Sandy, With Love 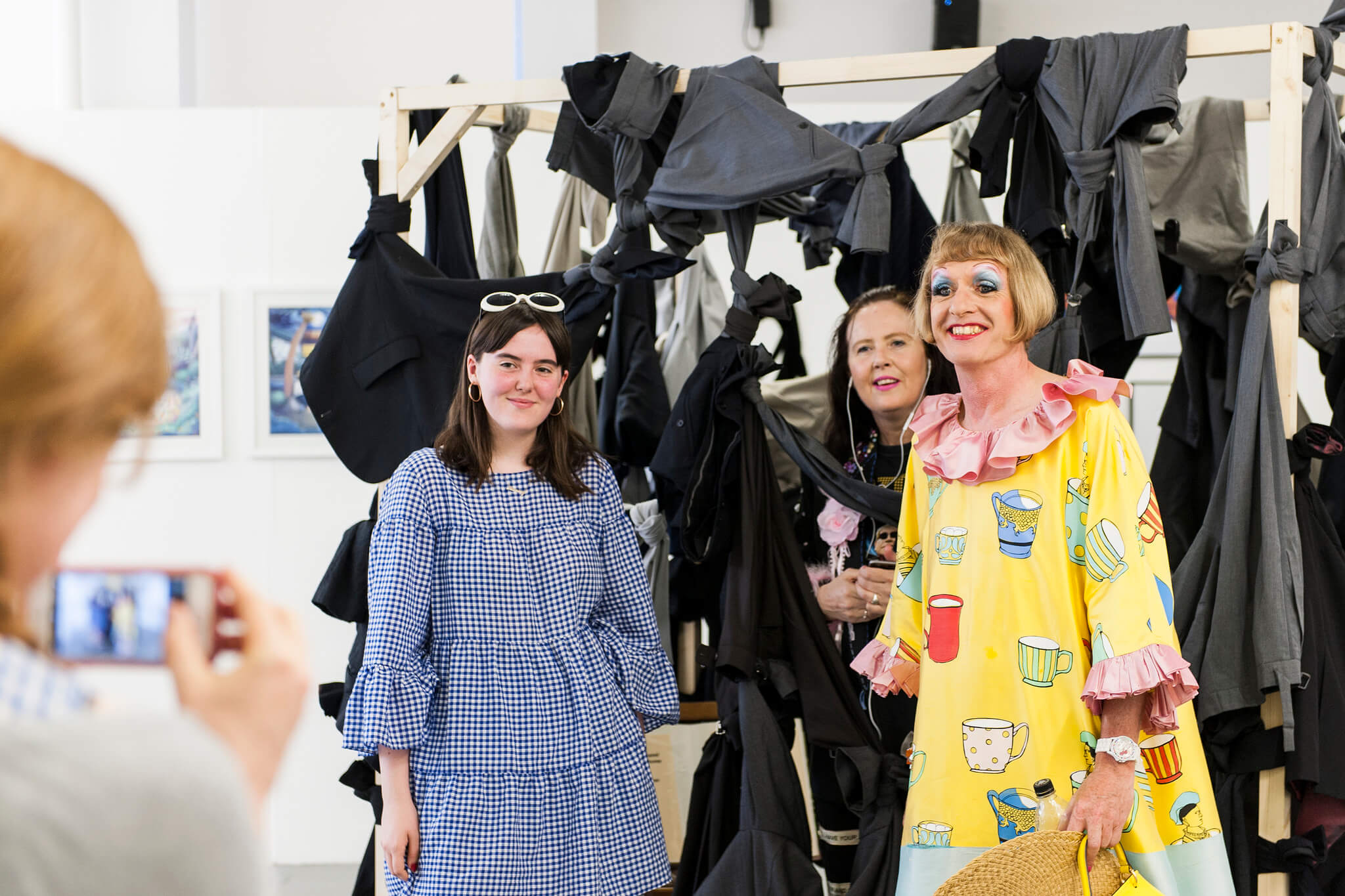 Steph’s a final year student from our BA (Hons) Illustration and Visual Media course although her work is predominately more aligned with Fine Art. Her project, ‘For Sandy, With Love’, which really caught Grayson’s eye, is a gift to her mother, referencing social housing as “she was the Queen of Social Housing and Elton John became the King”. 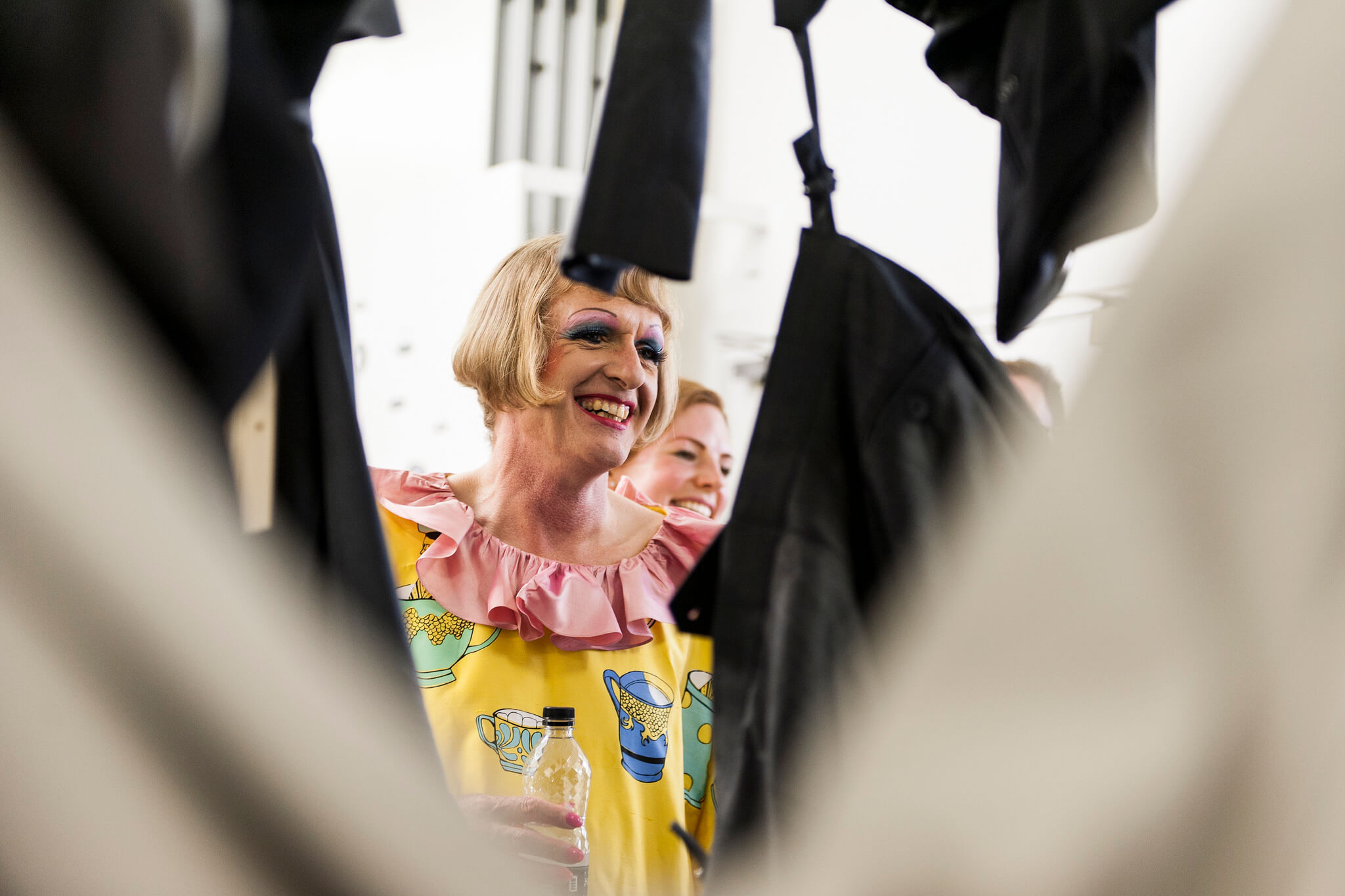 “It ended up being a collaboration between myself and her as she wrote poetry for the performance and soundtrack of the accompanying film. The piece was an installation using dance, poetry and costume featuring my mother as the dancing performer.”

“The main challenges I faced were based around nerves and the pressure of it being the final project. Three years had been building up to this moment. The only way to get around it is to try and accept that it isn’t the last project you will ever do, but just a great chance to show how far you’ve come and to make sure it’s about something that feels close or important to you.”

On meeting Grayson, Steph said “It was obviously a huge honour to meet Grayson as he has been a consistent inspiration for a long time, but very nerve-wracking nonetheless due to being such a fan of his. We spoke about the project mostly and the relevance of social housing due to recent events. It was great to be able to explain my work to him as I’d been to his show at the Serpentine Gallery three days before so it was incredibly surreal that he was then at my degree show!”

Alex is a BA (Hons) Illustration and Visual Media student whose work is mainly focused on painting but also extends to performance. His piece explored the idea of toxic masculinity; a theory that men who feel lesser than those around them need to fully adopt the negative stereotypes of masculinity that are forced upon men by society. Alex’s paintings are made in oil with the addition of charcoal into the paint, creating a texture that goes beyond the depth that colour can provide alone. 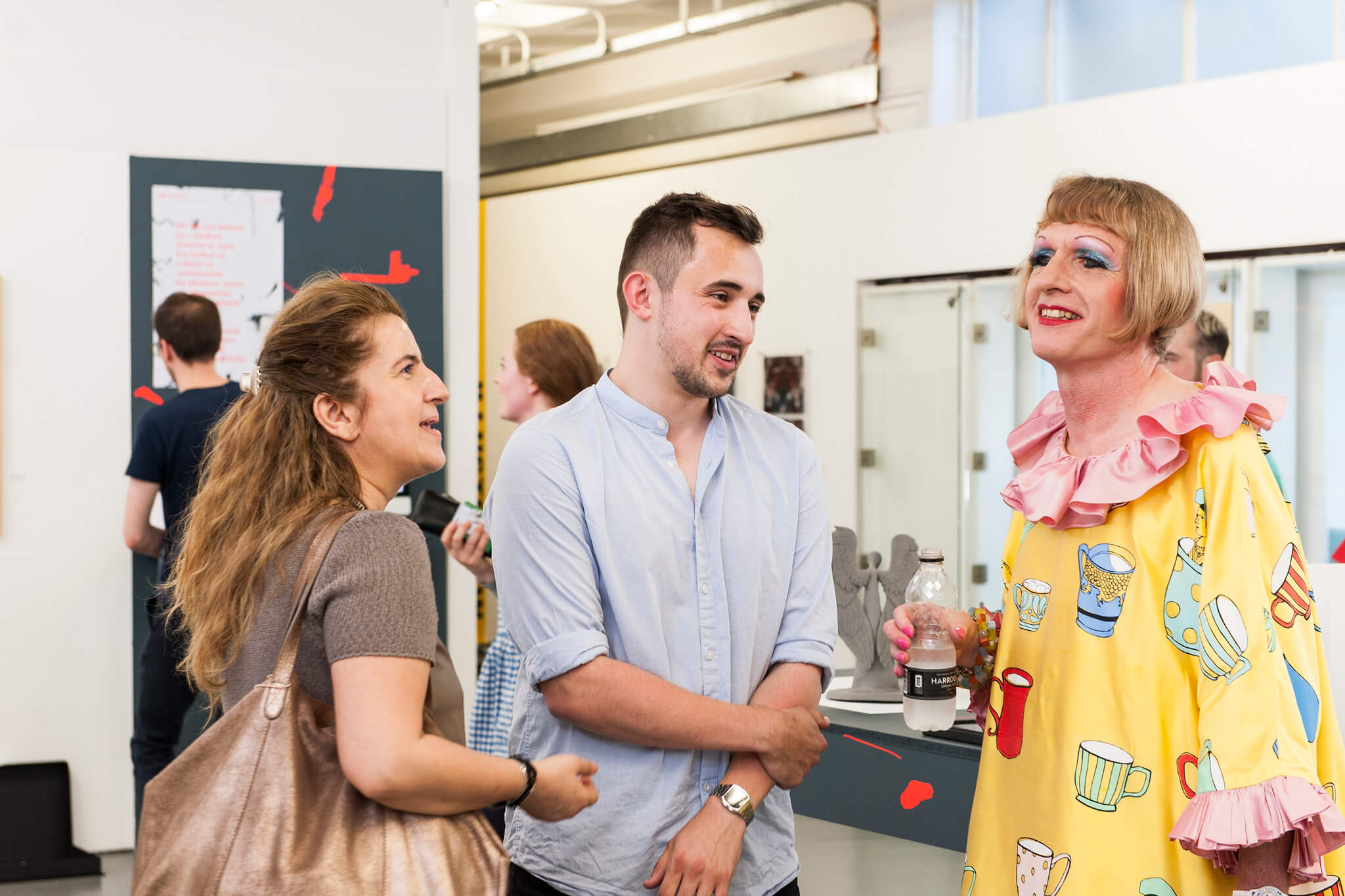 “The main challenge that I faced during the production process was the context and personal story behind it. The project stemmed from one of my best friends developing toxically masculine behaviour, such as aggression, alcoholism and depression, eventually trying to end his own life. The project became ever more important not only to me, but to the idea of my friend. I knew that my work was a way of trying to show him the problems he was causing himself and the harm he was doing to others.” 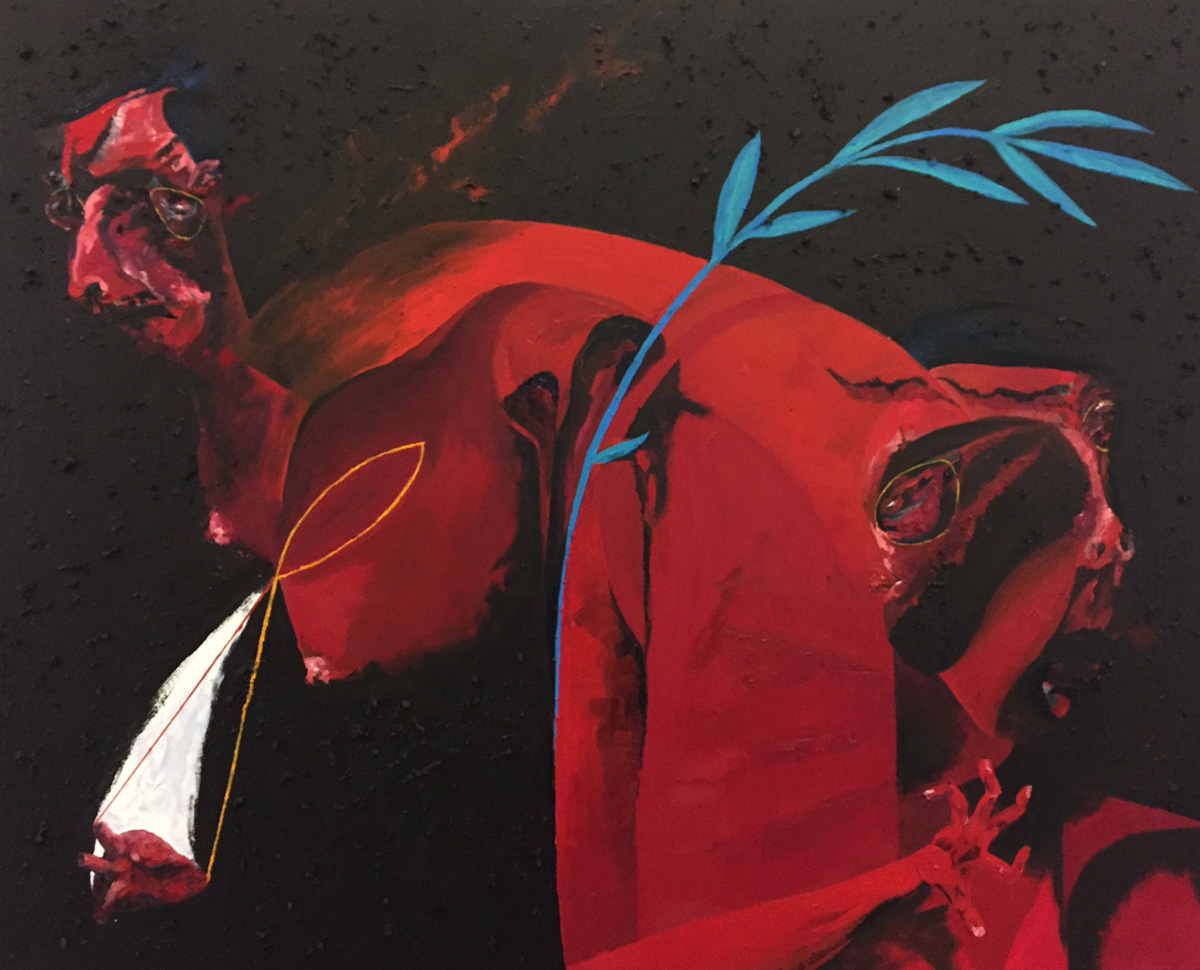 “It was an incredible honour to meet Grayson and to talk to him about my work. I had read his most recent book, ‘The Descent of Man’, so to have the opportunity to talk about masculinity and the trouble it is causing young men, comparing ideas and discussing the process of making work was a pleasure. We also went on to talk about the course and how I’d found studying at LCC, as well as my future plans as a practicing artist.” Peter is a multidisciplinary designer from our BA (Hons) Graphic & Media Design course who is interested in the physical, tactile areas of design. His project, Cooking with Wabi, was a self-initiated exploration into the benefits of cooking as therapy for depression. Peter became interested in the Japanese philosophy of Wabi-Sabi and the creation of objects of imperfection that reflect the changing cycles of nature and life’s impermanence. The project led Peter to explore handmade, ceramic forms, mark making techniques and therapeutic processes. This culminated in a designed kitchen environment of ceramic tableware encompassing an illustrative graphic language that aims to relax and ease uses anxieties, creating a calmer space for them to approach cooking without feeling that they have to conform to unachievable ideals of perfection. 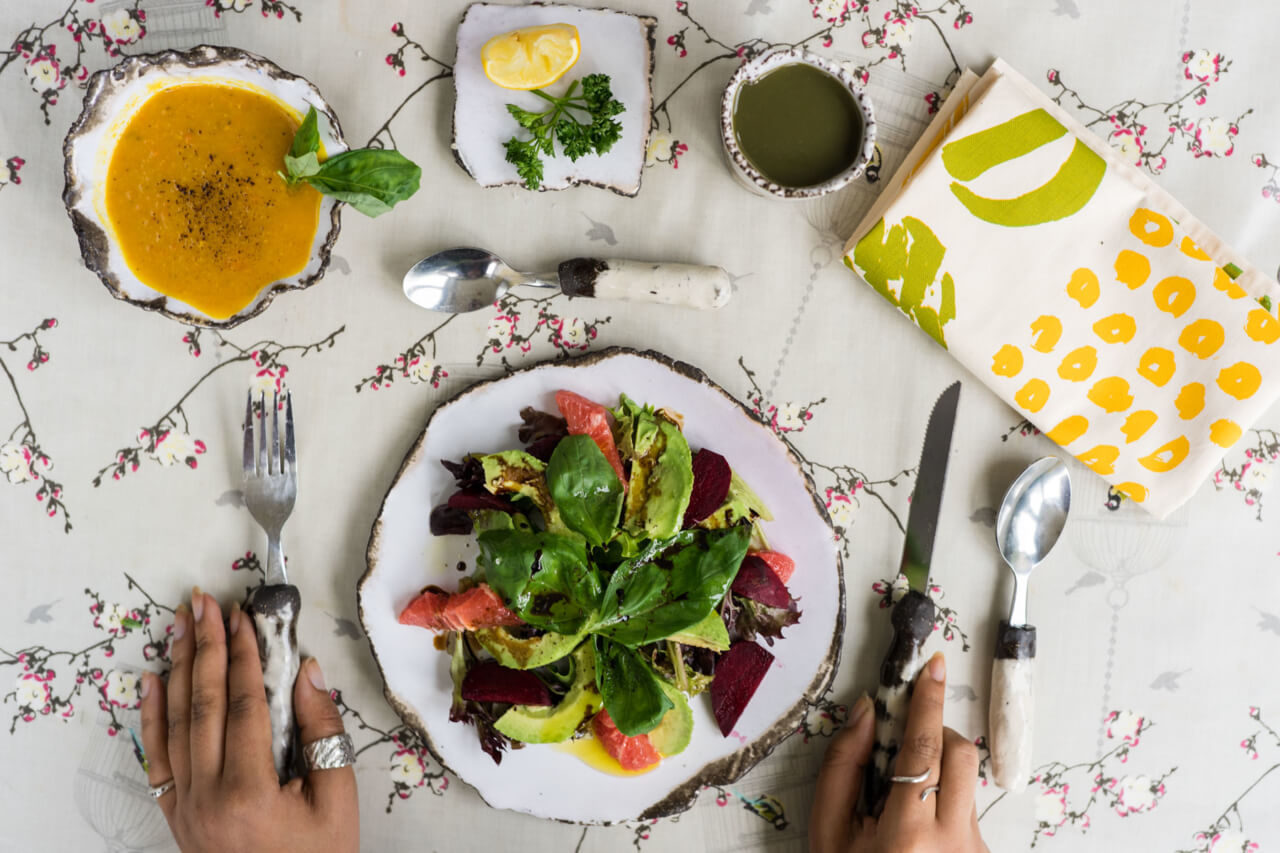 “For me, the challenges were learning and fully understanding the ceramic process, which I had almost no experience with. It’s a small science understanding kiln temperatures, glaze combinations and clay warping. It’s both exciting and bitterly disappointing to open the kiln to something that’s been completely ruined at 1300 degrees. It’s all part of the process, and also part of the Wabi-Sabi philosophy of accepting imperfection.” 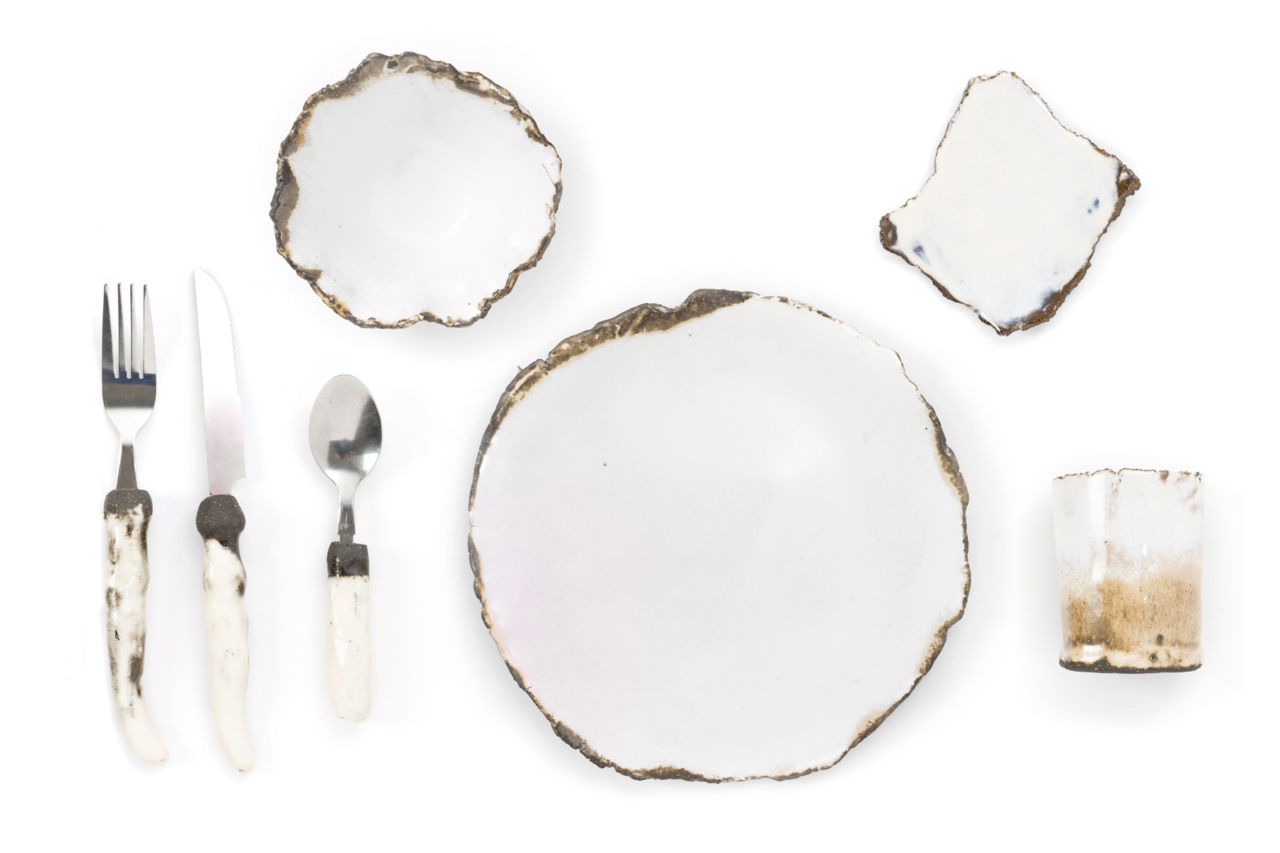 “I spoke to Grayson briefly about my ceramics and he commented on the pearlescent qualities of them, and how they could be mistaken for oysters. He also said I should be really happy with the final outcome and not to get too caught up with the rationale and project aims, which to a point I agree with however I’m not sure my tutors would be so happy with this approach!” 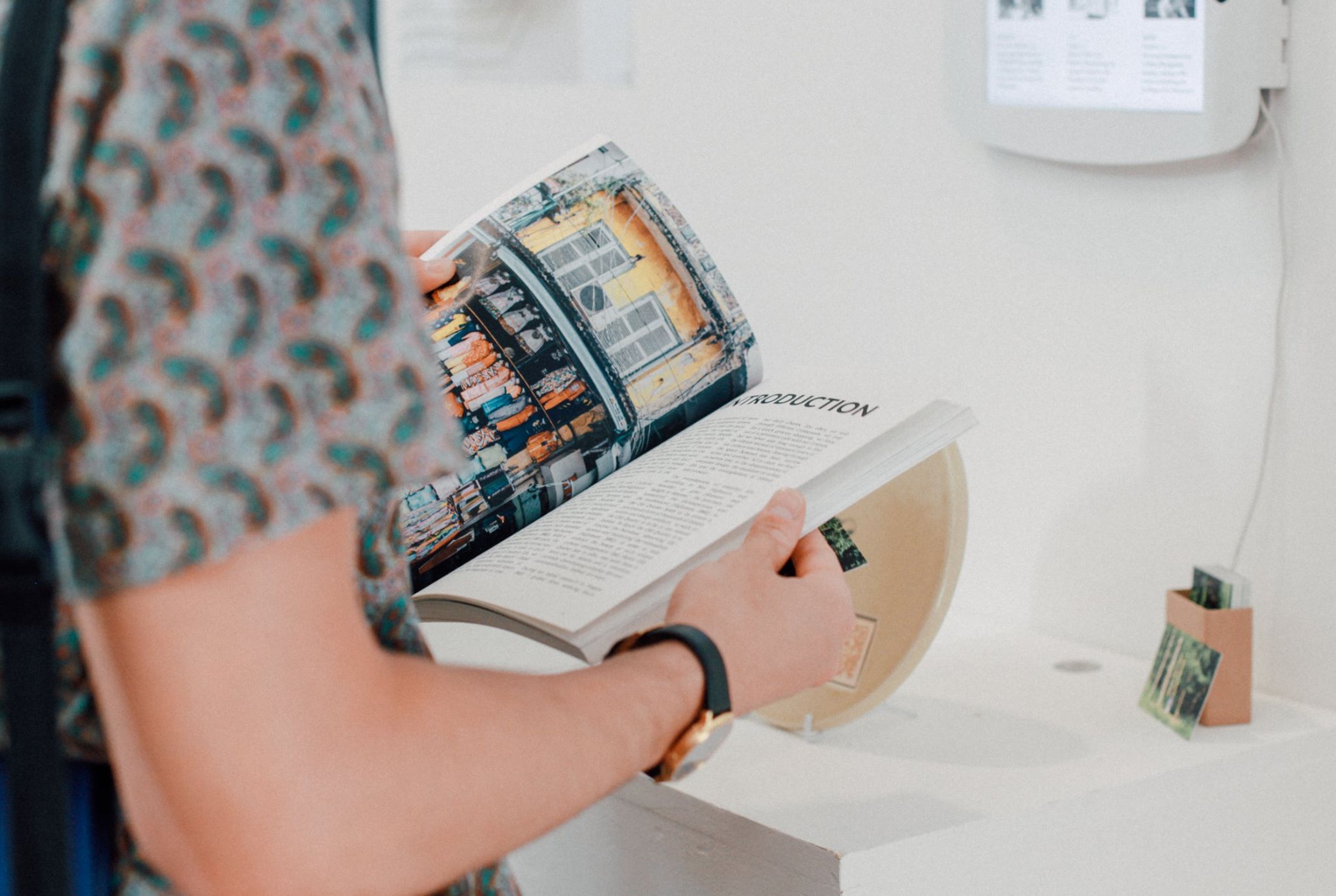 Sam is a BA (Hons) Design Management & Cultures student whose interests include psychogeography, social design, design cultures and design histories. Mapping Hanoi Old Quarter is a design research project that aims to discover and map the relationship of objects and practices with their cultural and historical background, while questioning their contribution to the development of heritage preservation and urban experience in the Old Quarter. ‘Mapping’ in this context means to reveal the quintessence of Vietnamese art, design and culture that aren’t immediately visible to the casual observer or tourist. “Being a world famous artist as he is, Grayson is also very lively and fun to talk with. We spoke about psychogeography and how technology has changed the way we experience urban cities. The conversation with Grayson was very intriguing as it gave me new thoughts to ponder and ideas to develop, brining my major project into real life.” 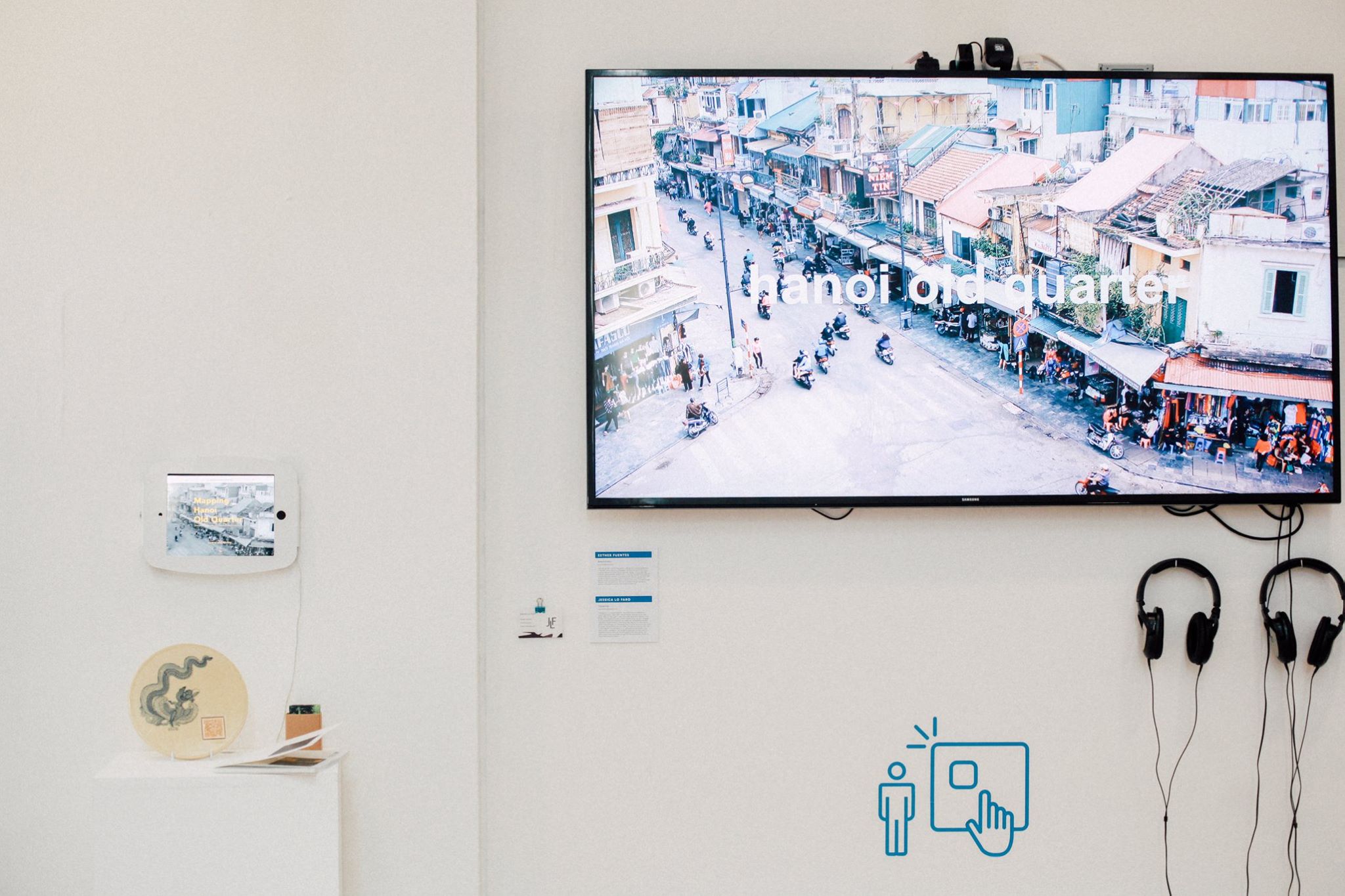 “The Degree Show is the last thing we do together before embarking on a new adventure in the real world. It was quiet emotional to see everyone’s work being presented and realising how far we’ve grown as creative. I’m proud of what we’ve accomplished together, this is only the beginning.” 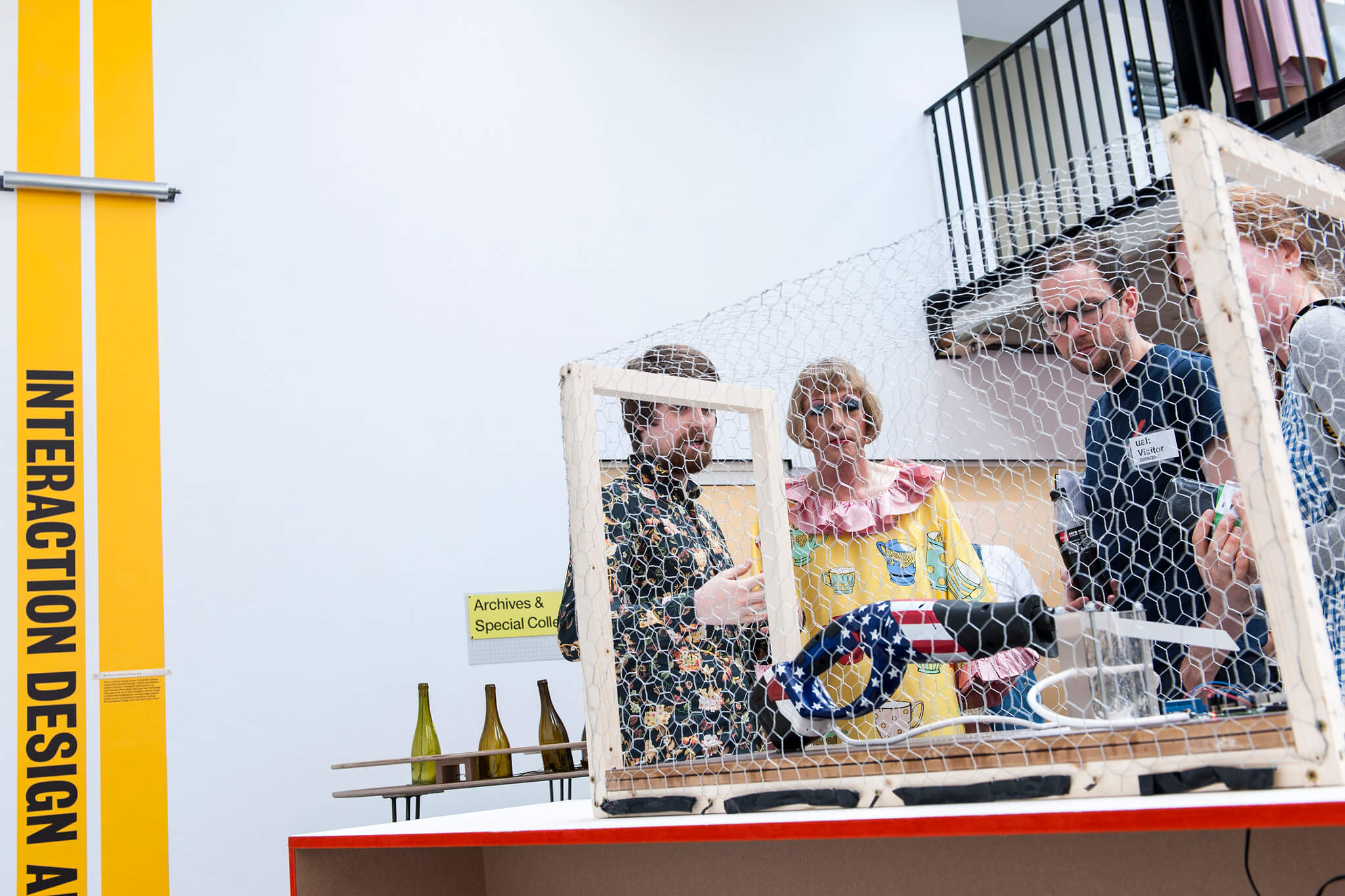 Tudor’s project, America First, focused on Donald Trump’s Twitter feed. Each time Trump tweets, the saw gradually cuts closer to it’s own power supply. Over time, it eventually destroys itself. The BA (Hons) Interaction Design Arts student chose to represent Trump’s aggressive demeanour and self-destructive tweets with the use of the saw as a symbol of the blue collar worker’s frustration, which inevitably lead to Trump winning the election. “The carnage and destruction of the power demonstrates how Trump could potentially neglect to fulfil his promises to the people, which was fabricated to draw them in.” 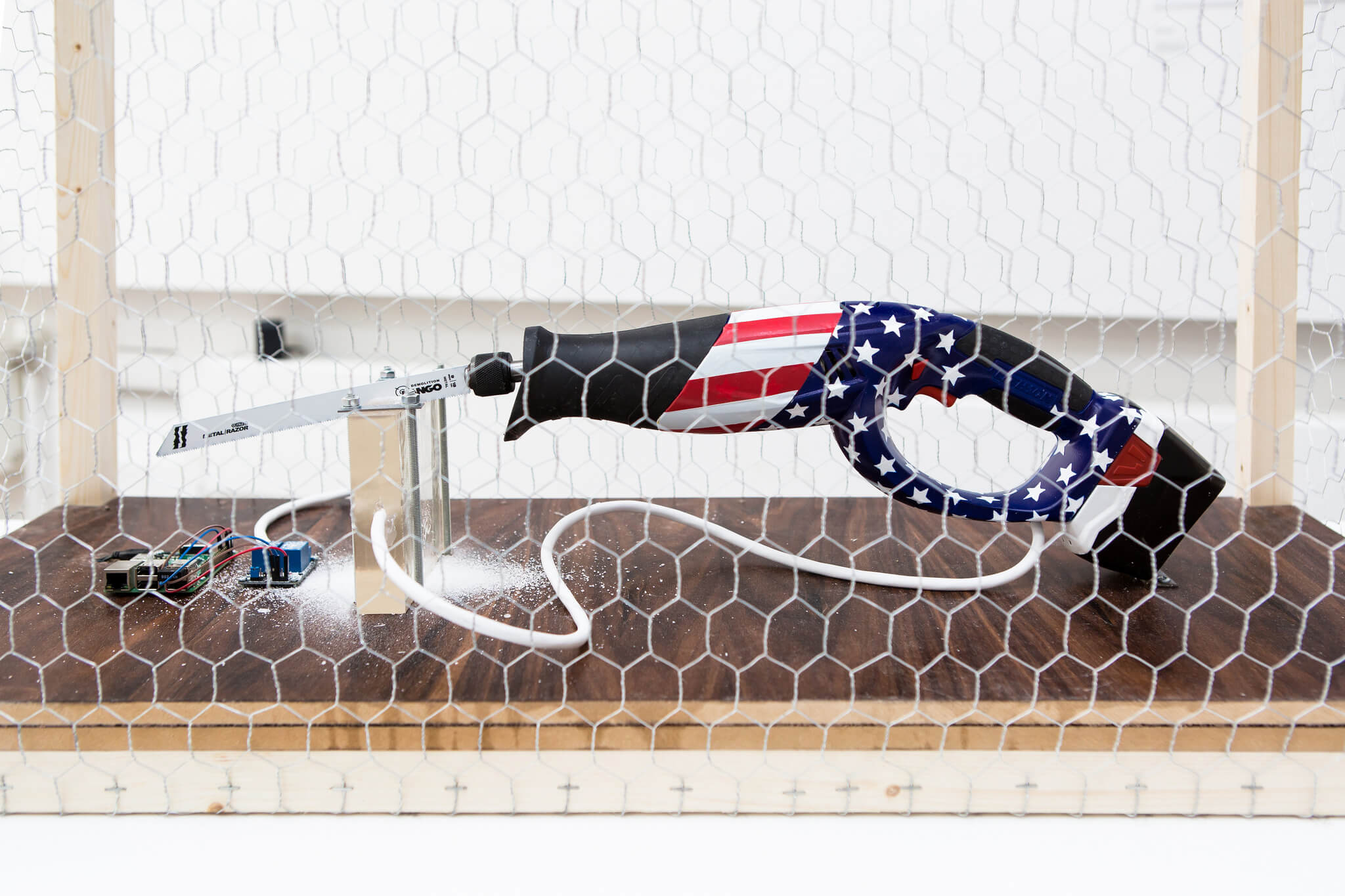 “It was an honour to meet Grayson as we share a contemporary and political theme within our work. We discussed the meaning of my work, Trump’s policies and their effect on the world.”