All work and no play would make postgraduate studies dull according to our Graduate School Assistant Naomi Rea, who recently helped to organise a postgraduate social at the Stanley Kubrick Archive. Here, Naomi reports on a 2016 (Graduate) Space odyssey.

When I emailed the UAL Archives & Special Collections Centre at LCC I pictured the responses coming from a dusty basement somewhere deep in the bowels of the College. Perhaps arduously clacked out on an ancient typewriter. Preferably by an old man wearing thick coke-bottle spectacles.

Of course, anyone who has actually visited the Archives & Special Collections Centre could tell you that the reality is very different.

Nestled beneath the bridge between the Upper Street Gallery and the Media block, the Archives & Special Collections Centre blends into the walls of the Well Gallery, practically invisible, until you know it’s there.

We decided to meet the students in the Graduate Space before the tour of the archives, just in case anyone couldn’t find it. The Graduate Space, for the record, is on the top floor of the Media Block, in M407. It’s open to all postgraduate students, and it’s also where I spend most of my waking hours. Come and check it out!

For our February social, we took a group of 15 students on a tour of the Stanley Kubrick Archive. The archive basically consists of items Kubrick kept from working on his films, organised chronologically by film and, within that, chronologically by stage of production. Archives Assistant Georgia Clemson pulled out some of the more interesting items for us.

These included, among other things, a screenplay for a serious version of Dr. Strangelove or: How I Learned to Stop Worrying and Love the Bomb. Apparently Kubrick thought that was a good idea before he realised that the subject matter was so absurd it lent itself better to comedy. 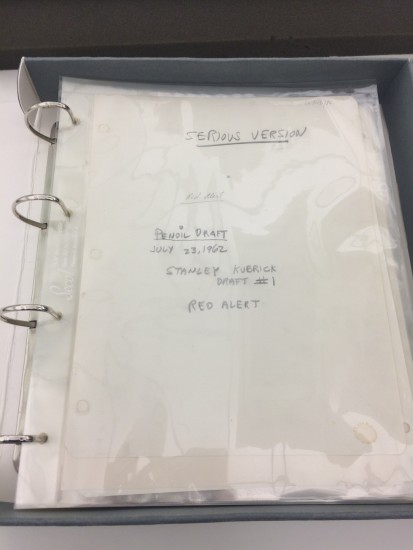 Draft of the ‘serious version’ of Dr. Strangelove or: How I Learned to Stop Worrying and Love the Bomb.

There was also a nod to my type-writer fantasy: the pages of Jack’s manuscript from The Shining that read, “All work and no play makes Jack a dull boy”, typed out meticulously not just in English but also in several other languages for the foreign versions of the film. Add to that a couple of the masks from Eyes Wide Shut and costumes from some of Kubrick’s other films, and we were basically in a Kubrick fanatic’s daydream.

If you’re wondering why LCC houses a Kubrick Archive in the first place, Georgia explains:

“The collection came to us in 2008. Kubrick’s estate had been looking to give it to someone for a while and they were interested in the idea of it being used by students. The University had some people working here at the time who facilitated that contact and it helped that we had the facilities to house it. His whole archive was in his family house in St Albans, even though he was from New York, so it wasn’t hard to transport it all.” 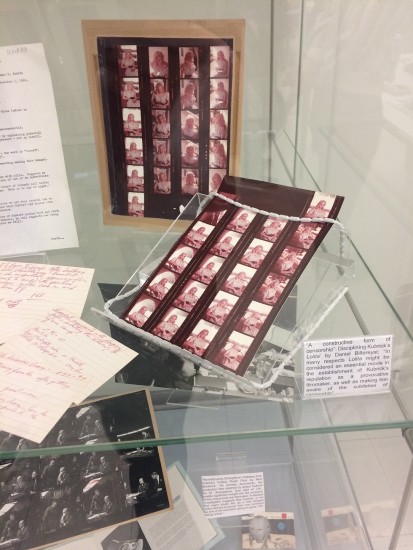 Display of stills and other material from Kubrick’s Lolita (1962).

I asked Georgia about the Apollo 11 sweater Danny Torrance wore in The Shining, because some think it was meant to indicate that Stanley Kubrick had, as conspiracy theorists suspect, used his knowledge of special effects to fake the moon landing. She laughed, saying:

“People come here all the time thinking that they will find some evidence but I’ve never found any evidence. I do think that the 2001: A Space Odyssey research and special effects look so realistic that I can understand why people would think that he had something to do with it, but that’s the same realism that he put into all of his films.”

Not enough to make you want to come to our next social? Would it help if I told you that after we soaked in all that culture, we soaked in some free beverages courtesy of the Graduate School in the Typo café? The Graduate School will be organising another social very soon! Do you have any ideas about what we might do? Let us know via our Twitter or Instagram – we’d love to hear from you!