After graduating from LCC’s MDes Service Design Innovation course in 2012, and with experience running an interaction design studio, Marcelo Albagli hoped to pursue a career as a digital communications and service innovation consultant.

When the Rio 2016 Organising Committee got in touch after a few months, he was delighted. Their digital communications department needed help in developing the strategic plan for the pre-Games period, but during his few months with the team, Marcelo began to realise the size of the project:

“In the next two years, the Games will involve 8,000 employees, 35,000 third party service providers, and 70,000 volunteers in the making. Rio 2016 will probably be the largest sporting event ever, with 15,000 athletes from 204 countries participating.

“Over 7 million tickets will be sold for the 64 Olympic and Paralympic competitions, and more than 20,000 media professionals are being expected in the city. It’s overwhelming”. 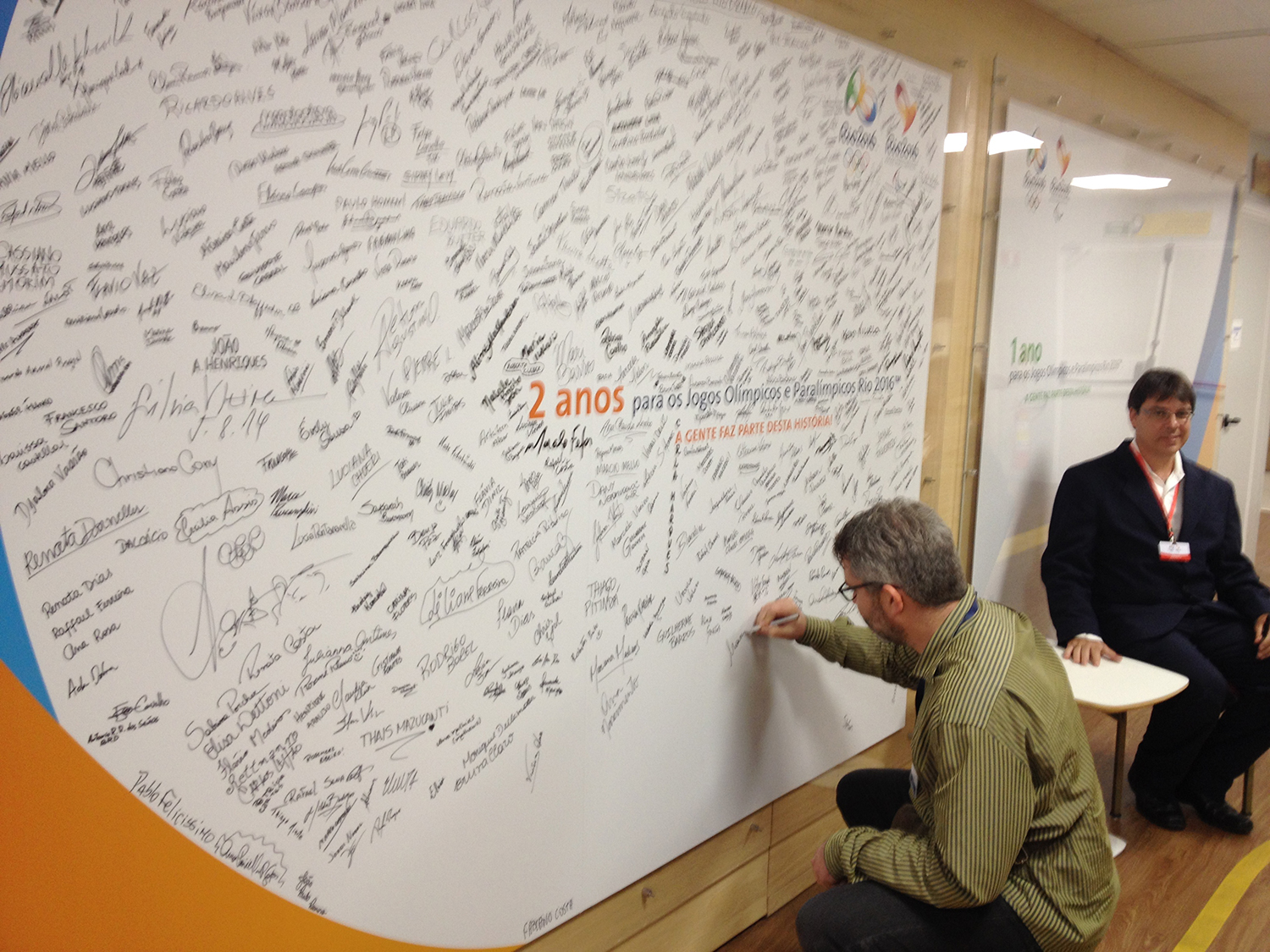 Signing the ‘2 Years to Go’ board

Marcelo decided that the digital communications strategy should be devised not through interviews with the leadership but during brainstorming and co-designing sessions with employees.

People from different departments were invited to generate ideas, beginning a collaborative creative process. These sessions allowed Marcelo to understand the Games from many different perspectives, while he and the team also researched the London 2012 and Vancouver 2010 Games. 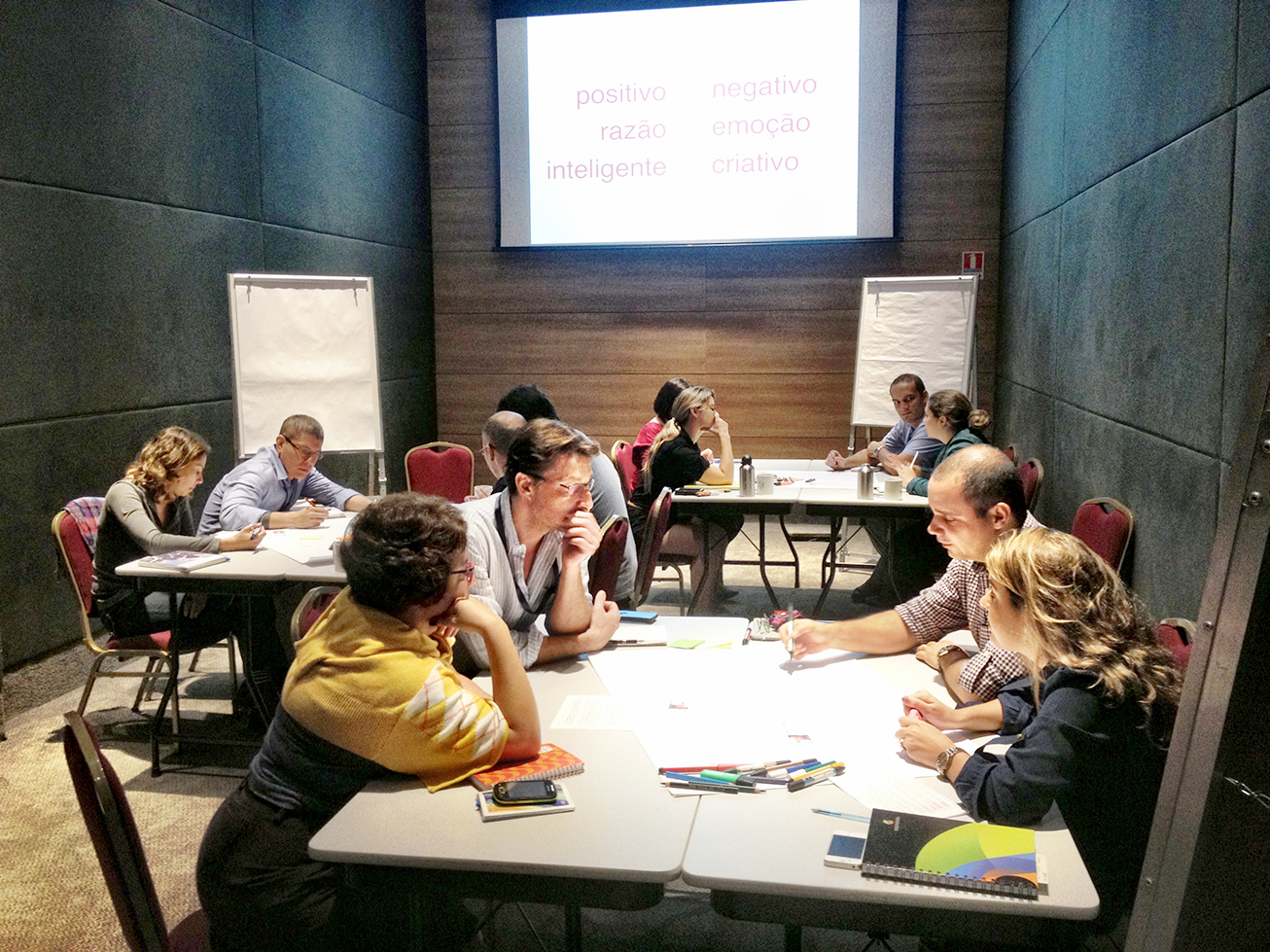 A brainstorming session at the Committee developed by the Rio 2016 Digital Communications department.

Co-designing proved to be a powerful approach, translating the idea of social participation into practice. Marcelo adds:

“In my opinion, it is possible to say that co-designing served the Committee almost as an analogy for what we wanted to be doing online. These sessions also confirmed how highly motivated everyone was.”

Marcelo was then invited to write the creative brief for the development of Rio 2016’s digital channels during Games time and outline how proposals should be assessed. He also conducted brainstorming sessions to design the Olympic torch relay:

“We all have an idea of how the Olympic flame usually travels across the hosting country to finally light the cauldron in the main stadium of the Olympics. However, the torch design, who the torch bearers are, and which landmarks are highlighted during the relay, that is what needs to be realised and orchestrated to create a meaningful narrative.

“And from what I’ve seen in these sessions, where most of the participants were not members of the Organising Committee, I can tell how unique the relay has the potential to be in Brazil.” In the Olympic torch relay brainstorming sessions, most participants were from outside the Committee.

Marcelo has also been involved with the development of a mobile app for volunteers, the first test event in Rio – the International Sailing Regatta 2014 – and an education programme to help students communicate using digital media. But most centrally, his job is to plan and deliver the digital communications channels for the Games period.

Reflecting on the challenges so far, Marcelo points out:

“One needs to learn how to cope with frustration when helping to make the Games. There are many exciting opportunities to build something meaningful being revealed all the time. However, just as it is with any other project, regardless of its size, resources are limited and you can’t control everything. We work for the best, and we hope for the best.

“I learn something new every day, which is the most rewarding aspect of the job apart from having the opportunity to contribute to society in some way. Whatever direction you look in you will find something amazing.”