EDIT 2.0/ What does green really mean to Craig Burston?

Launching with a Private View on Thursday 10 September, EDIT 2.0/ is the second in a series of annual design publications produced at LCC. Subtitled ‘What does green really mean?’, this edition has been created by BA (Hons) Graphic and Media Design Course Leader Craig Burston.

We spoke to Craig about his creative process, cassette tape culture, and the global resonance of green issues.

Can you tell us a bit about the idea behind the EDIT publications?

The EDIT series was instigated by Dean of the School of Design, Professor Lawrence Zeegen. The first in the series was a collection of undergraduate work shedding light on the breadth of work produced within the School. A great way to kickstart the EDIT project, student-centred and highlighting undergraduate excellence.

From hereon, apart from a consistent format and ethos, each issue should be radically different in concept and content. Hopefully issue three will be as radically different to mine as two is to one. It’s a great opportunity to propose and produce work that functions outside of traditional practice-led parameters and an opportunity to work in speculative methods both in terms of concept and content.

I see EDIT as being part of a publishing tradition that uses periodicals as a vehicle to test and explore, not simply to promote or persuade. 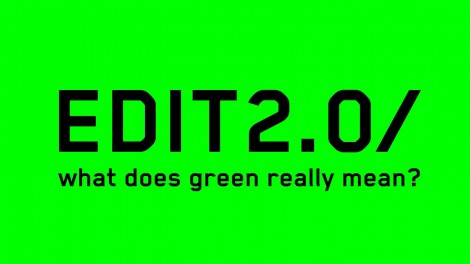 How did the specific concept behind EDIT 2.0/ come about?

When Lawrence invited me to undertake issue two, he was entrusting me with task of seeing where EDIT could go next. He gave me the subject or starting point i.e. green, but the perspective of questioning not presuming was my chosen position.

From that point on Lawrence gave me free reign to use EDIT as a means of reappraising and testing my research and practice methods; imposing or removing cultural parameters for example, or taking one notion associated with ‘green’ culture and running with it. I wanted to throw the bones in the air and see what I could see. To free up assumptions and to move away from presuppositions associated with the green.

I chose to start with something directly associated with green, something simple – recycling – but I wanted to test it philosophically as well as practically.

When objects are recycled, one relinquishes ownership of the object but the memory remains, to varying degrees of course, dependent on whether it’s a personal possession or dead packaging. However, if an author donates an article it can exist simultaneously in its original incarnation and its new place.

When content is repurposed for a new audience – and in some of the most pertinent examples here in this publication, the content is decades old and/or placed in a new context – it can take on even more resonance when read as part of a new artefact in the here and now.

Content was sought, sifted and selected, and then when permission was agreed for the selected content to be used, the book started to grow and the cycle of reflection upon the subject began in earnest. I wanted to act as the collector, compiler and editor and to make new narratives out of previously disconnected artefacts and content.

I should point out that as the project expanded it was vital to have a credible and critical sounding board and that’s when I invited Oswin Tickler to work with me. We have worked together on a number of projects and thank goodness he was there to throw some of the more fuzzy things into focus, both conceptually and in terms of the aesthetics of design.

I wanted to use the EDIT 2.0/ launch as an opportunity to further explore donating, recycling and editing. I also wanted to go beyond donating and recycling objects and to actually sacrifice them. You know that feeling when you give something away to charity but there’s that bit in your heart that isn’t quite ready to give the object up? That.

The exhibition will include a triptych entitled I’ve Never Read These And Neither Will You which is a response to the phenomena of collecting books for their looks.

We as designers collect books for their beautiful or radically designed covers but hand on heart, how many of them are read and their content absorbed, rather than simply collected or displayed?

You’ve mentioned elsewhere that as your research expanded, the project changed slightly – how did the emphasis shift?

I had begun the process of slowly teasing out potential content or stimuli and I was aiming to do this without too much self-conscious ‘searching’, at least to a point that timeframes and deadlines will allow. I like the idea of stumbling across interesting stuff and I wanted to trust this way of working again, at least to begin with.

The catalyst for the emphasis shift was the receiving of the first-person anecdote of the dropping of the atomic bomb on Hiroshima. A fortuitous conversation with a friend of a casual acquaintance in the local pub led to that being in my possession and it absolutely took my breath away. From that point, it was impossible for me to uncouple the link between green energy and energy as a means of control or conflict.

And as for global population, you only have to look at the desperate measures that people fleeing conflict will go to in their attempts to enter Europe for a more peaceful existence. Therefore, the project began as looking at the notion of green from a distance, through a telescope if you will, but it soon became a project about putting humanity under a microscope.

I am now of the opinion that it is impossible to separate something as banal as domestic recycling from something as desperately sad yet newsworthy as events unfolding on a daily basis, or supposedly unfashionable subjects such as nuclear arms control. 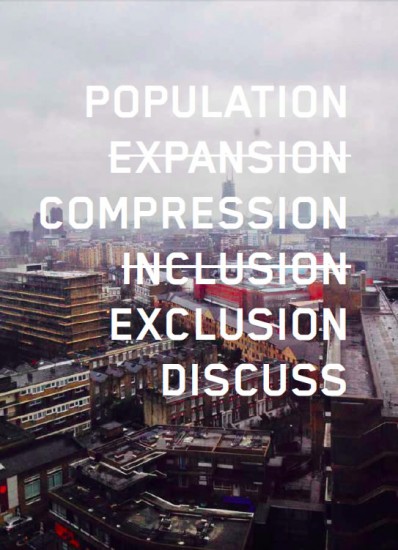 The EDIT series are LCC publications – how do you hope students here will benefit from this?

Within LCC and across the whole University, a great deal of time is spent exploring and working with green issues and one of my primary aims for EDIT 2.0/ was for it to function as a catalyst for further discussion and action. Hopefully that will happen.

Also, in terms of the ways in which I planned EDIT 2.0/ whilst also revelling in a little bit of happenstance, outside and above the content, I would hope that students see the EDIT series as examples of the art and design academic communities testing methods and principles and demonstrating the myriad ways in which we can practically and theoretically explore our subjects.

Can you tell us anything more about the EDIT 2.0/ cassette tape being played on the night?

Lawrence invited me to produce a publication and I ended up with a cassette tape! It came about through a number of things converging; a lifelong love of music and sound art and the opportunity to revisit technology, formats and built-in obsolescence.

Cassette tape culture is back, albeit on a niche level and in a world of downloads being replaced by clouds. Clouds are data farms, and farms typically speaking are used to cultivate stuff that is consumed. You don’t own a copy of music that you stream, it isn’t even as lovely as an object in your collection. It’s like paying for the key to the door but not the contents.

EDIT 2.0/ the cassette tape is a collection of music donated by the artists and the tape is not for sale. It is a limited edition and when they’re gone they’re gone. It won’t be streamed either, that would be rather self-defeating wouldn’t it?

Arguably I’m bound to say this but the music is superb – somewhere between background music, ambient soundscapes and reconfigured found sound – and I would be tempted to buy a tape deck to play it if I didn’t have one already. You can pick up some beauties on e-Bay for virtually nothing.