Dressed to Grill // 30 years on we tracked down the girl in the bacon dress from iconic 1983 Undertones album cover (and she’s one of ours!)

One day in the spring of 1983, 23 year old Cath Johnson made the bold decision to ditch her clothes and pose for a photo shoot wearing almost nothing but raw meat.

She was nearing the end of a BA Graphic Design course at Middlesex Polytechnic when she agreed to help out fellow student and friend John Pretious as part of his final project. She also modelled other food items including a toast dress and jammy dodger necklace – which all contributed to Pretious’ work later exhibited in Royal Festival Hall. 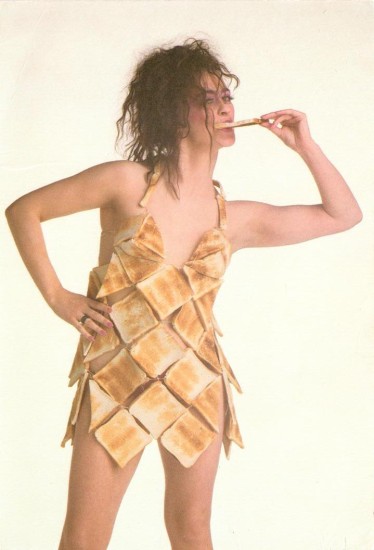 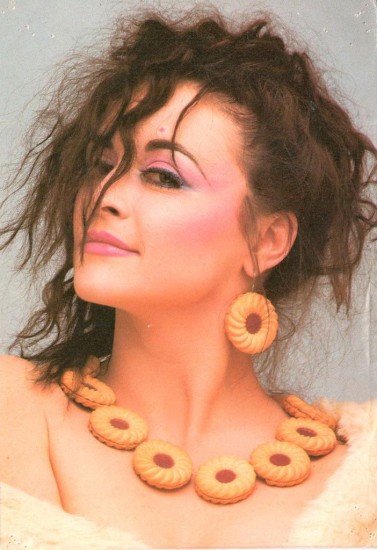 Thirty years on, Cath who is currently International Academic Coordinator at London College of Communication, talks about the photo shoot:

“John rocked up with the bacon and the cling film. We very carefully constructed a couple of slabs of gammon to make the bra- part of the dress. We kept my modesty; I was wearing very small pink pants. My nails were fake. There was a myriad of gaffer tape.

It was hilarious. We drank a bottle of Malibu and a bottle of sweet wine. I also had a black eye and a bruise on my arm covered by a bit of cosmetics.

John had a cigarette in his mouth and I had false eyelashes. The fag just about set fire to my hair with so much hairspray in it.

It was pure happiness. It was just very funny. We had people popping in and out to see how things were going… people having a look and having a laugh.”

Taken by “Trevor the patient studio technician”, the pre-digital photograph was picked up by record industry illustrator Bush Holyhead, and the image was used on the cover of ‘All Wrapped Up’ – a compilation of career-spanning tracks by The Undertones in 1983.

When the shot was duplicated on billboards across central London, it was denounced as “sexist crap” by sections of the women’s movement active during the early-1980s.

Cath recalls, “When I look back over 30 years I am so glad that these things happened. We were right in the moment. There was no agenda for it. It was, ‘Let’s do it’. I was wearing a bacon dress. It’s hysterical.” 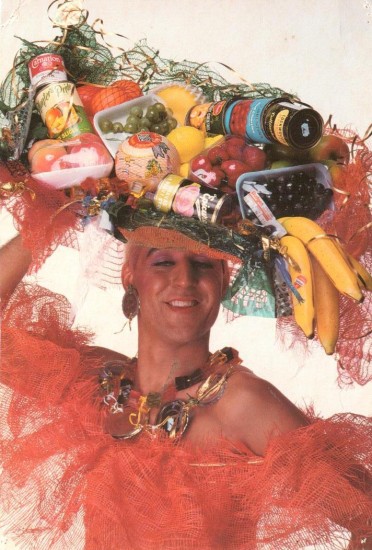 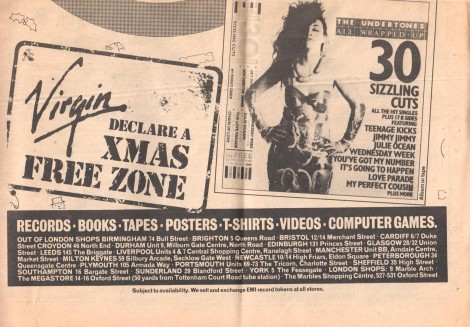 The Undertones are a punk rock/New Wave band formed in Derry, Northern Ireland in 1975. Famous for their EP ‘Teenage Kicks’ (recently covered by One Direction for Comic Relief), the band had support from BBC Radio 1 DJ John Peel, who considered them one of his favourite groups.

After a break, the band are now back together. View a list of upcoming Undertones gigs.

In 2010 Lady Gaga famously rocked up to the MTV Video Music Awards in a dress made entirely out of raw beef. In all its controversy, Gaga has been quoted:

“It represented something very special to me, which was at the time “Don’t ask don’t tell” was not repealed and gays were not able to openly serve in the military. I wore the meat that night as a statement about equality, that we’re all equal because we’re all flesh. It’s kind of morbid, but when we’re dead it doesn’t matter what our sexuality is.”

Unlike Cath’s dress (which was disassembled and turned into a massive fry-up for hungry students), Lady Gaga’s dress, which was designed by Franc Fernandez, currently resides in a preserved state in the Rock and Roll Hall of Fame in America.