Two London College of Communication students had reason to celebrate at the BFI Future Film Festival 2014, which took place on 21-23 February on London’s South Bank. The festival offers film-makers aged 15-25 the chance to come together and share their remarkable films as well as taking part in a variety of workshops.

BA (Hons) Graphic and Media Design (specialising in Interaction and Moving Image) alumnus Christopher Lutterodt-Quarcoo scooped the Documentary Award for film-makers aged between 19 and 25 with his powerful docu-drama Hertz, based around the phenomena of Musical Ear Syndrome and Phantom Sounds, linked to rapid hearing loss.

Without dialogue, Hertz takes the audience through the five stages of grief during the loss of hearing based on real case studies, portraying a constant battle between reality and memory.

The pitch for the festival’s promotional publicity was secured by another LCC undergraduate: BA (Hons) Graphic and Media Design student Dhiren Patel. This is the third year running that an LCC student has won this pitch. BFI designer Piccia Neri said:

“The BFI managers tested the ideas in a number of focus groups with the Future Film Institute kids before presenting them to the marketing director. The idea getting the most consensus ended up being Dhiren Patel’s composition with all the tools necessary to a young film-maker. This concept really struck a chord with young audiences and film-makers, as well as satisfying the marketing department’s need for a clear message”. 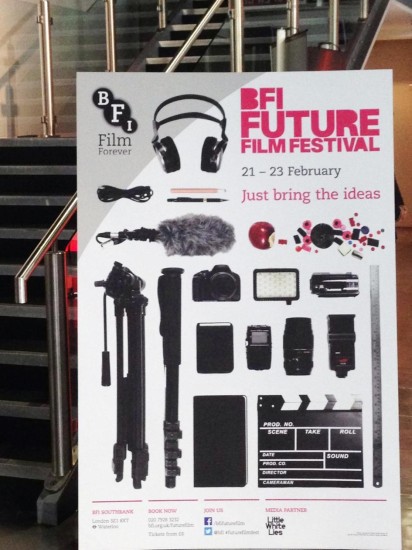 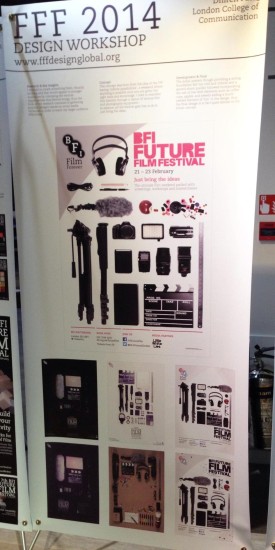 All the students who pitched their promotional concepts had banners of their work on display at the BFI during the festival. From BA (Hons) Graphic and Media Design, that included Assia Faheem, BoBae Kim and Alex Clarry.

Read about BA (Hons) Design for Interaction and Moving Image