Escape maps printed on secret presses in Prisoner of War camps aren’t something you come across everyday. Here Mark Radcliffe-Evans tells us about his father’s time at London College of Printing, creating escape maps during World War II using shower tiles and make-shift ink, and celebrating his legacy with The Brunswick Prison Camp Map Printers book.

“This letterpress project is born out of coincidence. I was brought up around printing, with an Albion and an Adana in my father’s workshop; my sister and I set type and made lino cuts and Christmas cards as children. I went to art school, trained as a stonemason and have worked with letterforms as a letter cutter for 35 years.

In 2014 I met Ken Burnley, a printer who had known my father and had been an apprentice compositor at his printing firm, Tinlings of Liverpool, in the 1960s. I told Ken in passing about my father’s clandestine press printing escape maps in a German POW camp and being something of a print obsessive Ken asked to see them when we next met. I took them up to Juniper Press in Liverpool, spread them on the table, and he immediately said “We have to do a letterpress book about these!” 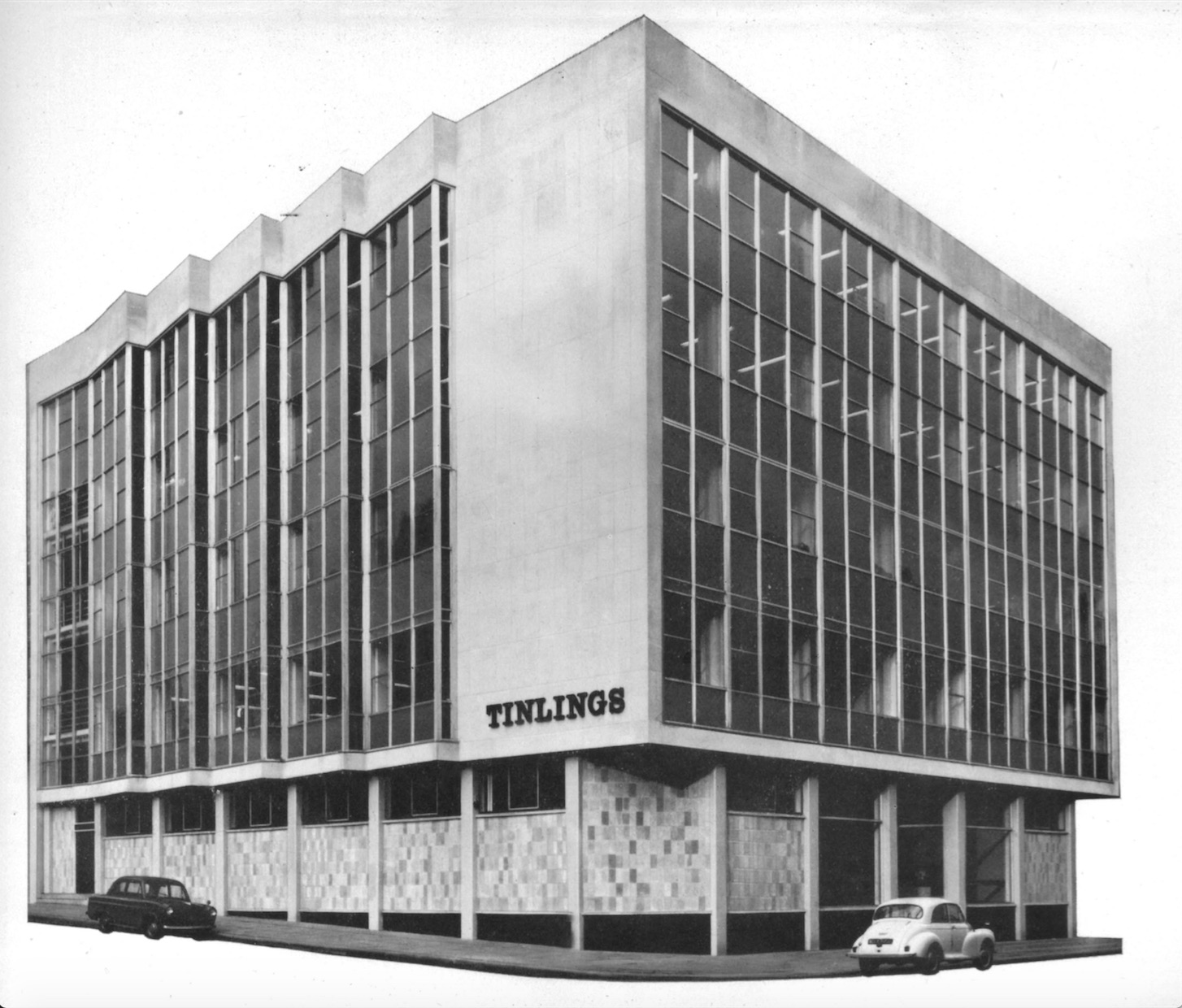 My father, Philip Radcliffe-Evans was born in Liverpool in 1917.  After leaving school he travelled to China on a merchant vessel, upon his return around 1936 he enrolled at London College of Printing, a time he talked of with great fondness and a training that gave him a lifetime’s career. In 1939 WW2 intervened and he and his brother enlisted as officers in the Royal Artillery; his brother was killed in 1941 and my father taken prisoner in 1942 at Tobruk, Libya.

He spoke very little of the war and his imprisonment; what I know derives principally from an article he wrote in Printing Review in 1950, which has been reprinted in the letterpress book ‘The Brunswick Prison Camp Map Printers’, along with notes he gave for a talk and his war diaries. Held first in Italy and subsequently Germany, my father was moved to Oflag79, Brunswick in 1944. From his days at LCP, far right: Philip Radcliffe-Evans

In August that year the camp was heavily bombed by Allied forces resulting in damage and casualties. Prisoners used tiles from the shower block as dinner plates, and it was through this that the clandestine map press at Oflag79 became possible. My father wrote “While washing them I noticed that the grease left a pattern on the stone and, wondering at this familiar phenomenon, I tried grinding two tiles together – with sand and water between them…I saw that the grease had actually been absorbed into the stone and a definite image had been formed.”

At this stage of the war there was fear and uncertainty that the Russians would arrive before the Allies, and rumours that the Gestapo might move POWs eastwards towards Russia. Many prisoners were planning escape before such eventualities, and my father realised immediately the need for escape maps. 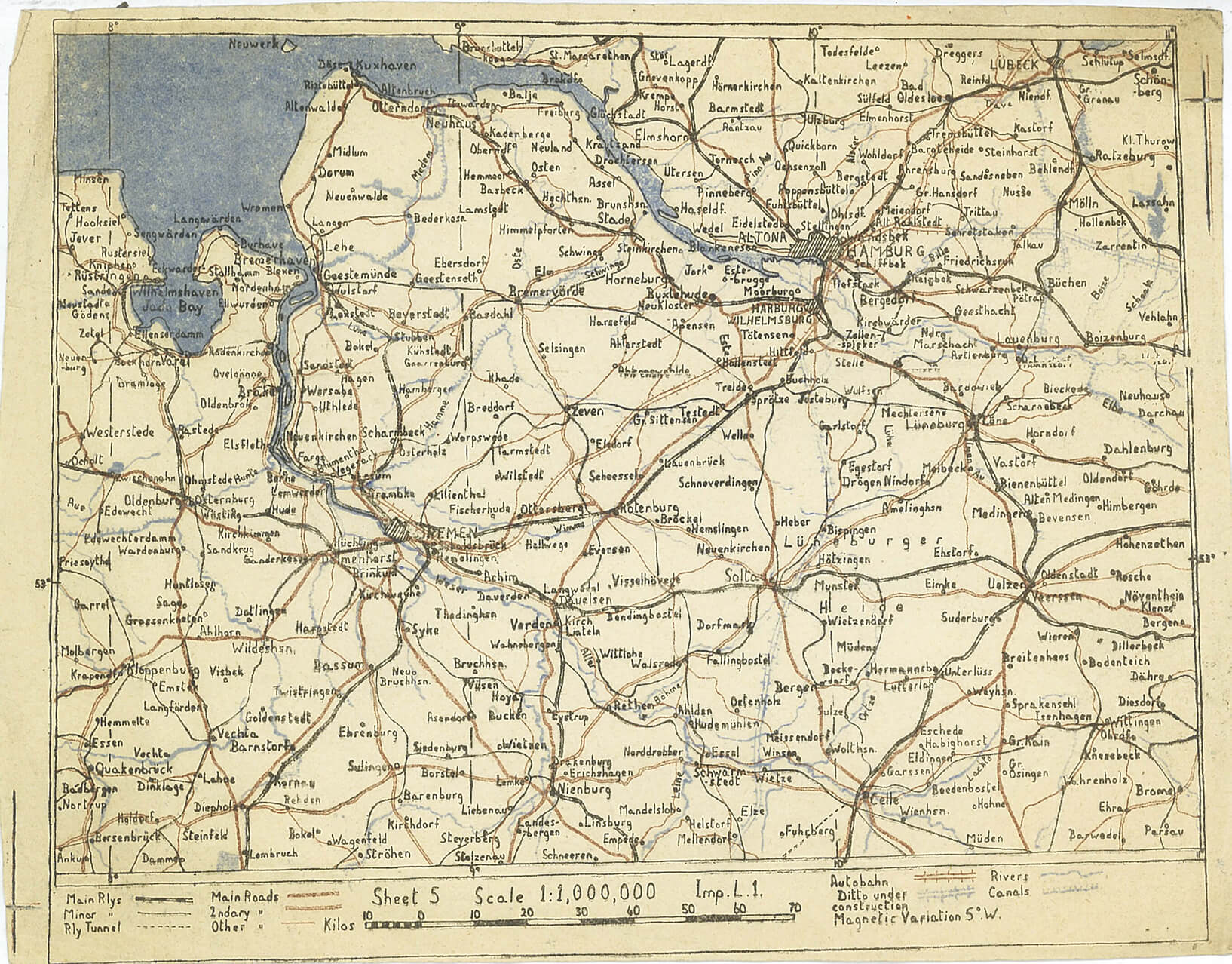 He experimented with ink made from bitumen picked with a needle from between floor tiles and melted with margarine. He went to the camp ‘Escape Committee’ and gathered a small team of artists and skilled men, gaining access to a fixer – a man who had access to corrupt guards and who could lay his hands on virtually anything.

A press was constructed from floor boards, tin plates, an old binding press, a metal window bar, leather and a process using the shower block tiles as plates was developed fast. Maps were copied onto the plates from ones that had been smuggled into the camp, or that had been appropriated from the camp’s administration. 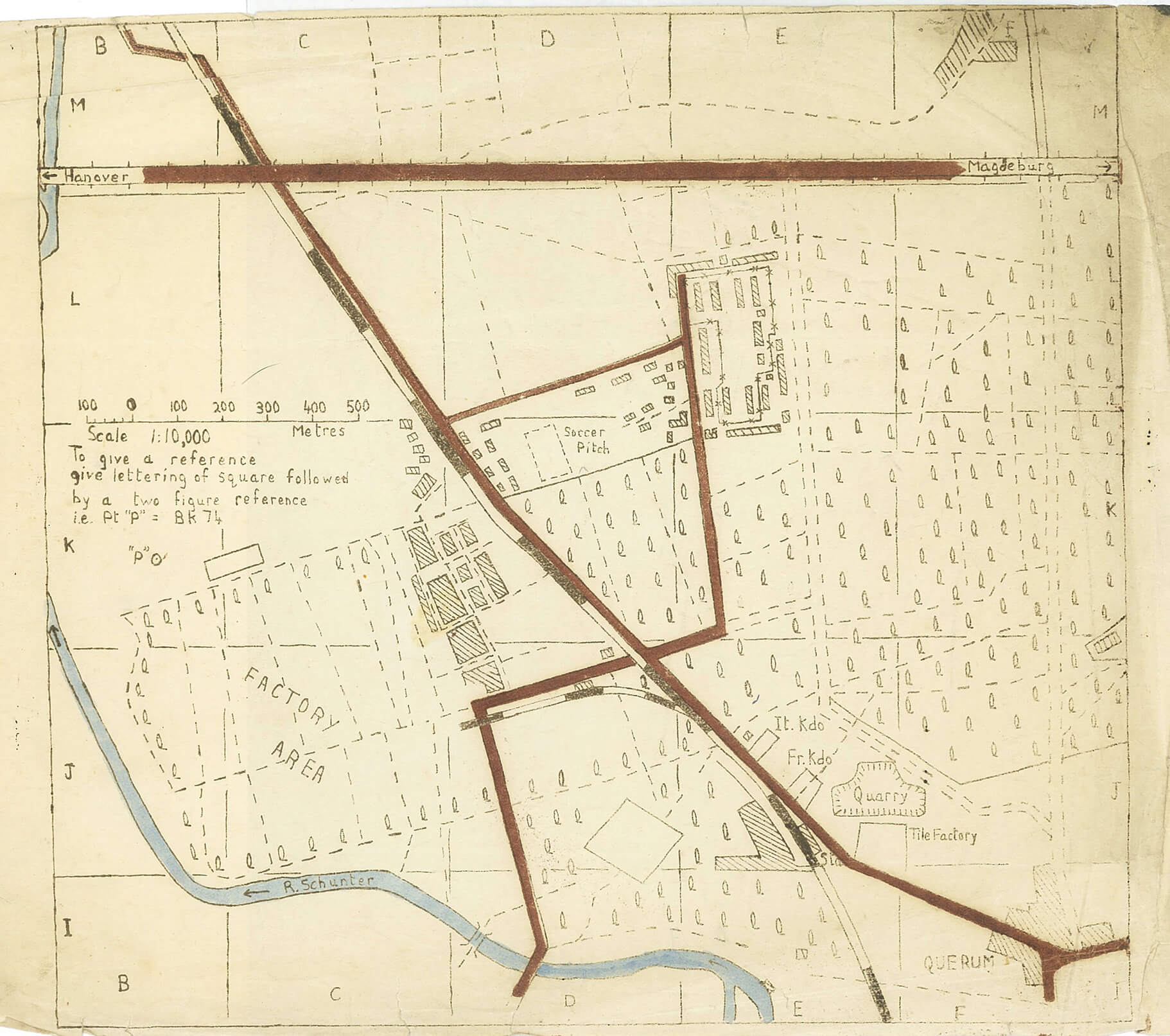 1200 maps in total were printed before my father and another prisoner were caught working on a plate in January 1945 and placed in solitary confinement on limited rations. The press was destroyed along with a number of maps. Three maps are in three colours, and one uses four; “a total waste of time” and “vain glorious” as my father wrote.

The camp was liberated on April 12th 1945. My father brought one tile printing plate back and a dozen maps including two complete sets of four. The plate with its map hung in a frame in the house, the rest of the material lay in a drawer and came to me when he died in 1992. The Brunswick Prison Camp Map Printers is a letterpress numbered limited edition of 150 composited and printed by Ken Burnley at Juniper Press, Bluecoat, Liverpool.  It was printed on a Vandercook No.4  Western Press and 1864 Albion hand-press using 12 point Monotype Bembo cast by George Miller in Oswestry Shropshire. There is also a digitally printed facsimile edition of 300. It has been a labour of love and a fittingly appropriate tribute to my father and The Brunswick Printers.”