We chatted to the advertising trio about the process behind their projects, how it feels to be award-winners, and tips for others looking to submit work for awards.

Congrats on working together as a team to win the coveted D&AD New Blood Wood Pencil! how do you feel about winning the award?

Dominic: It feels amazing! We won our very first pencil! It’s a great addition to the CV and book, and it definitely helped me land an internship, everything has since bloomed from there.

Daniel: It’s a really cool trophy and a neat piece of work to show in my portfolio.

Josh: It’s great to know the work we do is valuable! But it’s also important to always be thinking of the next thing.

You got to pick your own brief for the project, which one did you choose and why?

Daniel: We picked the Brave Blood brief because it was such an open subject and it didn’t have anything to do with making ads.

Josh: It’s important to work on something other than advertising and the D&AD brief seemed like the perfect way around not just doing advertising.

Dominic: We looked at the briefs as a team and picked out what resonated with us, and it was the D&AD brief itself. At the end of the day, we each had to feel excited about what we were going to do to be able to do it well.

How did you approach the brief, do you have a process you go through when looking at briefs?

Daniel: We first come up with the ideas everyone would, and throw them in the bin! Then we go as far as we can, so our idea is the only one of its kind among hundreds.

Josh: Just go mental with ideas! Come up with as many ideas as possible and work with the ones that are less obvious. You need to stand out.

Dominic: We approached the briefs based on our own beliefs, and what we were passionate about. Essentially, we each had our roles in the team and we looked and worked on the briefs focusing on tasks specific to each of our roles.

What kind of process did you go through when putting together your pitch?

Daniel: What we thought of is how intense that day must be for the judges. Imagine sitting in a room for 6 hours, looking through 300 student-made videos. We thought, ‘how do we make the judges not hate our work?’

Josh: Package the idea in a memorable way; it’s a great way to stand out. Just do something less obvious and the judges will notice.

Dominic: Weekly brainstorming sessions over lots of coffee. Dan’s the brains, Josh is the wordsmith, and I just make things look nice ! Even though we had our own roles, we always bounced ideas off one another. So the pitch for us wasn’t so much on what to say, but how to say it best.

⏫#theOface campaign for the Royal Opera House, one of Dominic’s works⏫

How has your time at LCC contributed more widely to your advertising projects?

Daniel: LCC was the place we all met, and none of this would have happened otherwise.

Josh: Yeah, LCC’s where we all came together, and that’s the biggest contribution there can be!

Dominic: I picked up some animation skills at the start of my course, which I applied to many projects, coupled with the art direction skills I picked up based on LCC’s curriculum.

Daniel and Josh, you were also chosen as one of the best young teams worldwide at The Talent Business Cream Awards, how do you feel?

Daniel: We were so happy, and now we feel like we need to prove we’re worthy of that title. In a real, grown-up way!

Josh: It was a shock when we first found out, and now we both feel we have to prove it. It’s a big title to hold, so we need to back it up with more really great work.

Working in teams can be quite difficult, how do you balance each other’s workloads and make sure you’re both happy with your work?

Daniel: We talk to each other, it’s like a marriage, but you’re allowed to cheat by working with other people. It’s actually better than a marriage.

Josh: Daniel is right, it’s like a relationship and the most important thing is communication. 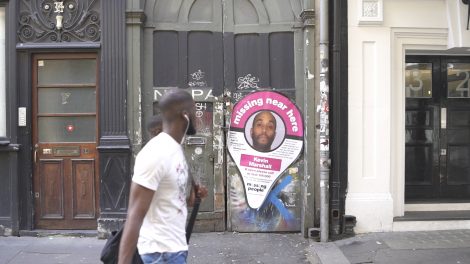 To help draw attention to the 5 million people missing in the UK, Daniel and Josh mixed the ideas of Missing People UK and Pokemon Go.

Do you have any tips for others who want to send their portfolios to be judged for The Drum Cream Awards in 2017?

Daniel: Start early. Find people from the industry you respect and show them your work every three weeks. Do cool stuff. Make stuff happen. Go out and meet more people. And even if you don’t win Cream – you win in the long run.

Josh: It’s super important to get feedback from loads of different places, but then also work out which feedback to take on board. And remember, any prep you make puts you in a good place for everything else you do, so you may as well give it a go!

⏫Josh and Daniel came up with this successful Tesco Halloween campaign⏫

And finally, do you have any examples of great adverts that have inspired you?

Daniel: 4creative [Channel 4’s in-house creative agency] made me realise how cool our industry can be.

Josh: To steal Daniel’s idea for this question, R/GA always has amazing work.

Dominic: Honestly, I don’t have a list of favourite adverts, there are so many great adverts out there. However, inspiration for me comes from everyday things, not adverts. If I had to pick one, it would be Kenzo’s recent one by Spike Jonze.