This event, linked to the RA’s current Ai Wei Wei exhibition, was an evening of talks, performances and installations that aimed to challenge our contemporary use of the internet, and imagined future applications of digital technologies.

Calvin explains: “‘I(WE) AM(ARE) ANONYMOUS’, is an interactive video installation that seeks to reveal the duality and complexity of being anonymous. The installation invited users to anonymously create content which was visually broadcast in the exhibition space. The installation is made up of two parts, creation and propagation.

“In the anonymous zone, the user was filmed, but their face was not shown. This emphasizes the idea of hiding in plain sight through anonymity and the freedom it affords.

“The propagation component broadcasts the activities from the anonymous zone on the wall opposite the creation component. However, instead of the face of the anonymous participant appearing, the faces of onlookers were reflected, representing the idea that an individual becomes the collective through anonymity – both trivializing and empowering their existence.

“Additionally, as the content will not be filtered, it will reflect the presence or absence of social responsibility and morality once ‘I (we) am (are) anonymous’.

“Process-wise, we started by establishing an idea based on the exhibition brief. After bouncing it back and forth between the three of us, we finally decided on one which we really liked and then proceeded to build on it. We came up with the initial idea of representing an anonymous state more tangibly, but it was important to us that it was still visually impressive.

“When it came to construction, we worked long hours every Monday and Wednesday over the whole of October. Despite having planned the project four months prior to the event, our space was only confirmed a month before, so this prevented us from moving forward. But with Aitor’s experience in the 3D workshop, construction moved quickly and the resultant booth was constructed in slightly over a week. 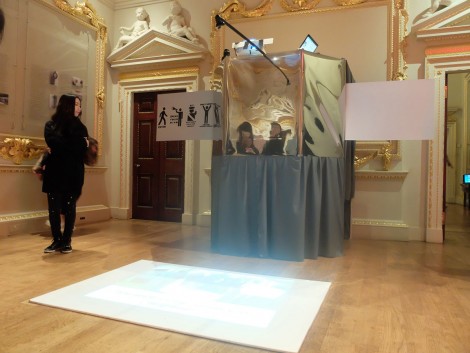 “I then refined the software and made it fit our installation while Chin Chin worked on the visual communication of the booth. The last hurdle we had was storage and transport. As it was a large structure we had to store it in school and then transport it to the RA. Making the structure flat-pack was a really smart decision on our part as transport was so much more manageable this way.

“Lastly, we had to set up for the actual event at the RA. This was more of a challenge than an actual problem as the RA staff were very helpful. We set up the installation in about 3 hours and then proceeded to test it for another 1 hour. Once we were satisfied with the outcome, we packed up, took a break and waited for the event to start.”