Students on LCC’s BA (Hons) Media Communications course recently collaborated with The Cinema Museum on a live project to raise awareness with funders of the Museum’s activities around cultural heritage, strengthening local community ties, and cinema enthusiasts. The undergraduates were asked to produce a fundraising film or web solution for the Museum, and were able to deliver their presentations at an event hosted by the museum.

Students were able to share their final work with the client, their peers, and tutors, and receive feedback. One group of students, including Anna Murphy, Annabel Chua Li Hui and Chermaine Koo, created a social media-driven fundraising campaign, through the hash tag #TCMBlackHats, involving user-generated photo and video content. Their campaign, targeted at millennials, was created using interactive, fun and sustainable elements.

“The event was well attended and was particularly rewarding for the students, who came a long way through a real life experience of working with a client on a live project,” said Course Leader Dr Thomas Giagkoglou.

We got in touch with Anna, Annabel and Chermaine to hear more about their campaign.

What was the inspiration behind your idea?

All: Charlie Chaplin! Well, since the museum is also known as the Charlie Chaplin museum. The memories, bringing people together, keeping the essence of cinema alive; the brilliant advertising efforts from the “Wear A Dress” campaign were highly inspirational, which sparked the idea of embracing collective effort and creativity for a good cause.

Most of all, the power and influence of hashtags on social media in driving digital campaigns in today’s society takes a front seat in the execution of the concept.

Can you give us an overview of your creative process?

All: The Cinema Museum (TCM) has links to Charlie Chaplin, and his recognised image is a bowler hat (it was also the fashion when cinema and film were invented), so we decided to bring it back to life with our campaign by branding it as #TCMBlackHats. The concept plays upon the idea of the Ice Bucket Challenge, where people take pictures or videos of themselves with a black bowler hat. To make it more engaging, we decided that it would be a competition. Once a week/month TCM would choose the best post, and they would win a prize. Our film is a kind of documentary/ behind the scenes of the campaign, but it also tells you how to get involved. 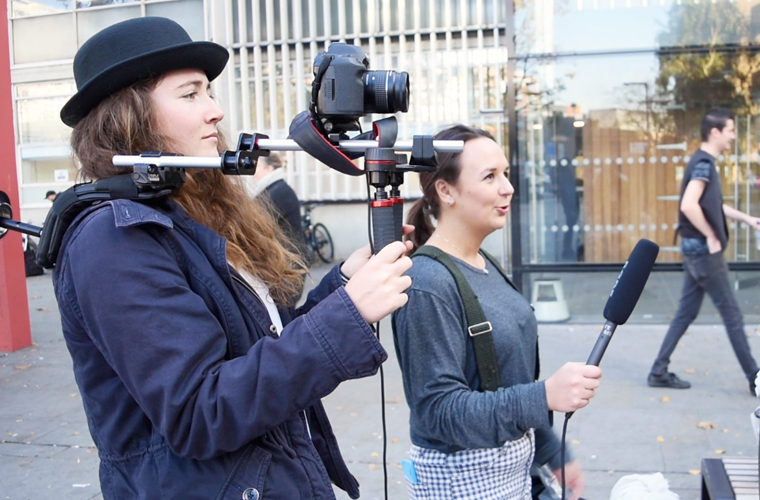 The #TCMBlackHats team at work on their filmed campaign.

How did you feel when you first learned that the collaboration was with The Cinema Museum?

Anna Murphy: Excited! I never knew there was a Cinema Museum located so close to our college, I think we were all amazed when we first walked through those doors and smelt the vast collection of memorabilia they have there.

Annabel Chua: I thought of the collaboration with the museum as a good opportunity to work for a real client and utilise and further enhance a combination of theoretical and practical skills I have developed through the past two years.

Also the fact that the museum’s mission aims to preserve historical cinematic artefacts for educational means for future generations, as well as creating a space/place beneficial to the local community, all added to the significant value and meaning the project had for us.

Chermaine Koo: Working with our first ‘live’ client evoked a mixture of excitement and anxiety but it was all for good! I saw the collaboration as an opportunity for our acquired practical and soft skills to be judged by the client.

How successful do you feel the Live Project was?

AM: At first we were all unsure how it would turn out, but seeing everyone’s final results I think it was pretty successful, some of the work done was very impressive.

AC: As a whole I feel that the project was highly successful as it met the criteria of the given client and college brief, as well as going beyond through the collaboration of the film and web teams.

CK: Definitely a 100% success rate due to the high praise and satisfaction from the client! However, such acclaim would not be possible without the guidance from our tutors. In my opinion, brilliant student work is the hallmark of excellent teaching. 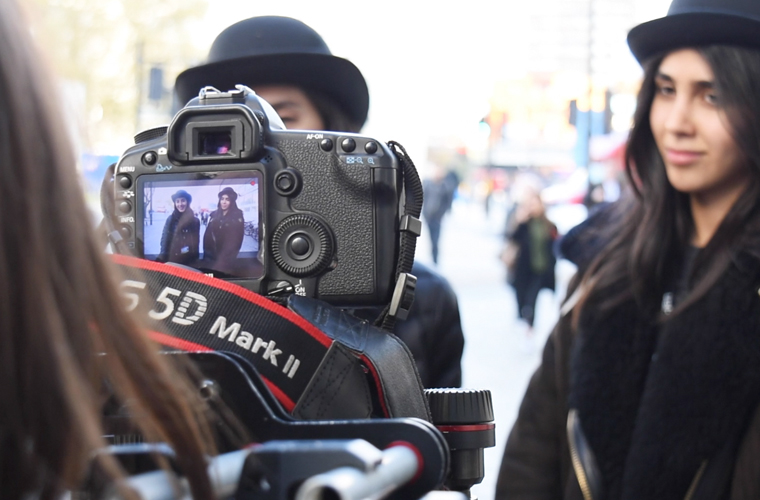 The #TCMBlackHats team at work on their filmed campaign.

What were some of the most challenging aspects?

All: Starting, coming up with a kick-ass, out-of-the-box idea. Having an achievable idea in mind and then putting to the test. You always need to think if it is possible in the timeframe you have. Make it realistic. Striking the balance between innovative and practical. Making both film and web solution coherent; supportive and of additional value to each other.

What practical skills were put to use in this project?

AM: For my film team’s solution, everything was practical, from shooting to editing to props.

CK: Project management skills that are acquired through the years of college practice, creative software such as Adobe Muse to design the website, and usage of research skills – well, just to name a few.

How has this opportunity helped you to develop and grow?

AM: Having to create a successful social media campaign in a limited period of time has helped me better understand the meaning of time and how precious it is. Good quality projects take time to produce and grow. Never leave anything until the last minute.

AC: It has further helped me appreciate collaborative effort, seeing the time and quality benefit of dedicating specific roles within the team according to individual strengths and interests.

It has also enabled me to be more aware of the professional media and communication industry; being more informed of current trends and how to effectively learn from both the good and bad of past/existing campaigns to produce an authentic and impactful campaign. Furthermore, on a technical and skills level it has allowed me to learn new web design techniques, as well as how to be a efficient and supportive Creative Director to my team.

CK: My three main takeaways are (1) believe in the competency of your team, (2) communicate to resolve or prevent any forms of miscommunication and misunderstandings that could potentially lead to low team morale, (3) have faith in the process and trust the guiding hands of our tutors! They have a larger perspective than us.

What was the most valuable thing learnt through this experience?

AM: Anything is possible when you put your mind to it and work with incredibly talented, patient and like-minded people.

AC: Well, it has to be the impressive outcome of our collaboration and of stepping outside one’s comfort zone.

CK: As the project manager, there was a reiteration of learning how to balance being process and results driven. After all, the project deliverables for the client will not surpass college friendships and project memories that will last for a lifetime.