Work by three BA (Hons) Animation students features in the BBC4 three-part documentary series Music Moguls after they were commissioned during a work placement.

As part of their Introduction to Professional Practice unit, second-year students Rebecca Perrone, Giacomo Autili and Sara Bereta were asked by BBC producers to make 17 animations of between 3 and 10 seconds each for the third part of the series, looking at music PR.

They were given the script and asked to watch clips from the programme and animate specific moments in sections on Uriah Heep and Mick Jagger and Jerry Hall.

Watch the episode on iPlayer 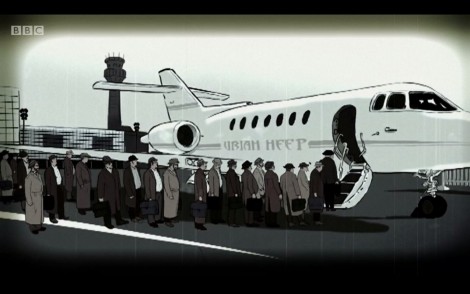 We spoke to Rebecca, Giacomo and Sara about their experience.

How did you work together on this brief?

RP: I did the animations, the clean up and I selected the colours. Giacomo was the background artist and he also animated the shots with the bear in the Uriah Heep part. Sara was the colourist of the animations and she animated the queue in the aeroplane shot at the beginning of the Uriah Heep part, and she also drew and animated the weed in the Mick Jagger and Jerry Hall part. The roles weren’t too divided though because, in order to meet the BBC deadlines, we had to shift roles sometimes and help each other. 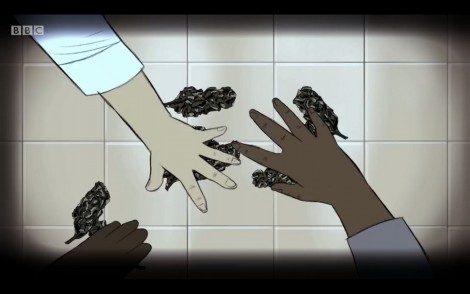 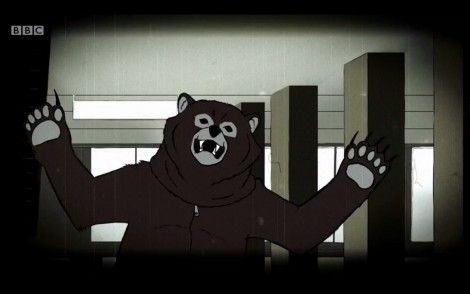 Still from Music Moguls 3: Myth Makers. Uriah Heep are greeted in Switzerland by a man in a bear costume.

What were the major challenges?

SB: I enjoyed solving the problems associated with animating using a number of programmes simultaneously. I think that was the main challenge.

RP: The main challenges for me were to properly understand what the client wanted us to do, and to agree the number of shots and the amount of work that we had to do. Sometimes the client would ask us to make changes, and sometimes those changes would have been too long and time-consuming for us to do, especially taking into account all the other work we had to complete. So we had to agree solutions with them.

GA: For example, I had to redo two backgrounds from the start because they looked too ‘modern’ considering the animation is set in the ’70s. 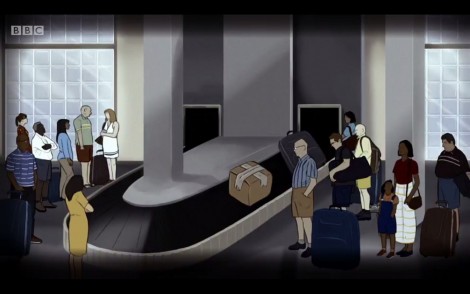 And what was the most enjoyable aspect of the project?

GA: I had a lot of fun working in the team and I felt incredibly satisfied after completing a new scene and realising that it was going to be shown on TV!

RP: The most enjoyable aspect of the project, for me, was all these challenges we met. They helped me to better understand what it means to work for a client, and especially as a freelancer for a big organisation like the BBC. I really enjoyed working hard and producing something that the client liked.

SB: I also enjoyed the colouring, because although it was time-consuming it was quite relaxing!

What lessons will you take forward from this into the rest of your course?

RP: As a first work experience, it gave me a lot of satisfaction and allowed me to grow as an animator. I learnt the importance of scheduling and meeting deadlines, the importance of keeping the client constantly updated on the work in progress of the animation. I learnt how to act in a professional way, and how to be clear and honest with the client. All these things I have learnt will help me for sure with all the future projects I work on.

GA: I found this project to be extremely useful for my development as a professional artist. I had the opportunity to understand better how freelancers must approach work and learnt to accept any kind of feedback and criticism in order to improve the outcome. 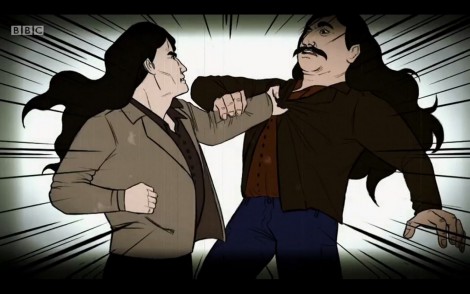 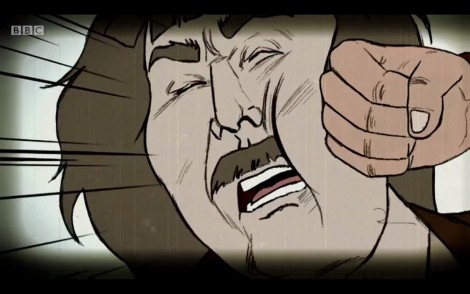 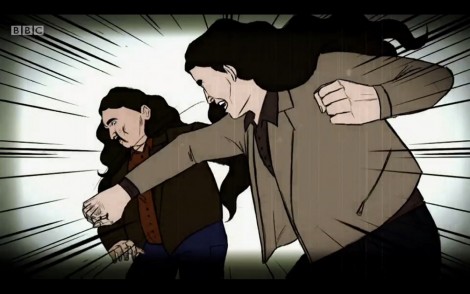 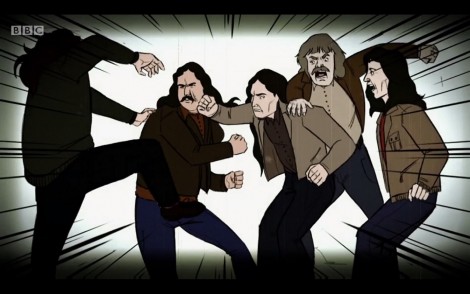 Above: Stills from Music Moguls 3: Myth Makers. Uriah Heep come to blows during a photo shoot.

Watch the episode on iPlayer