Photography alumna Naiya Yiakoumaki was appointed as Director of Research and International Networks for the 6th Athens Biennale which took place earlier this year.

We caught up with Naiya to talk about her experience at LCC, her role as Archive Curator at the Whitechapel Gallery and the challenges of collective curation.

Tell us about yourself and your practice.

I have been working in the arts since 1991, as soon as I graduated from LCC. Initially I started teaching theory of photography and pursued a career as an artist, in 1999 I shifted into curatorial work and I have been a professional curator ever since.

Looking back to your time at LCC, what did you study and how did it prepare you for where you are today?

I studied Photography, completing a BA (Hons) in 1991 and later an MA in 2001. My studies gave me the confidence to teach at university level and at a later stage to start thinking about doctoral studies. In the beginning I was thinking about a PhD in order to investigate photographic collections in museums but this led me to a profound curatorial interest which compared the policies of collecting and exhibiting within an institution.

LCC is home to the University’s Archives and Special Collections Centre. Tell us about your experience as a curator specialising in the use of archives at the Whitechapel Gallery.

I have been the curator of the Archive Gallery since its inception and have developed a programme since 2005. I am interested in the archive as a source of information which challenges preconceptions and mainstream understandings of canonical history of art. 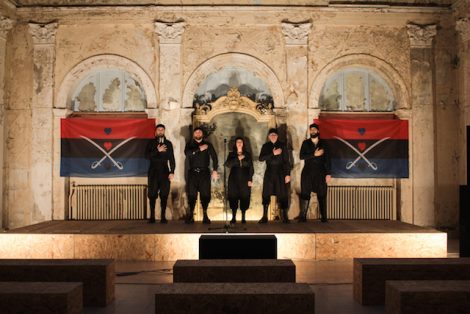 This year you are curating the 6th Athens Biennale, Waiting for the Barbarians, as part of the Heart and Sword Division. Tell us more about your experience of collective curation.

Heart and Sword Division is a group of theorists, artists and curators who conceived the theme of the 6th Athens Biennale and though they operate under this name, they’re not a collective who have been working together prior to this. Collective curating is a thrilling way to think about exhibitions. It takes longer than when you curate on your own but having so many ideas and opinions on the table helps shift one’s preconceptions about their views. I found it challenging at times but it was definitely a learning experience.

How did you approach the theme for Waiting for the Barbarians?

We approached the theme gradually after discussing some issues we wanted to address. For instance, the lack of values in the western world, the loss of direction, the unpredictability of the everyday in life, politics etc. We looked at the stereotype of the ‘barbarian’ which was always the threatening other. With our exhibition we want to explore the hypothesis that we are all barbarians for each other and despite the sense that we pursue our lives in ways that are normative, in fact we have many barbaric attributes ourselves. See what happened with the US elections result! Normal, lawful family voters constructed a barbaric outcome… 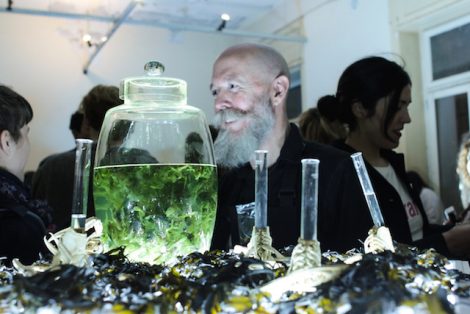 The Biennale programme includes a diverse range of actions, from noise interference to cooking. How important was it for you to curate an active programme and how do these actions relate to the idea of resistance?

We decided to programme a series of actions rather than an exhibition as we wanted to present an active abstaining position from the large mega-exhibitions that were taking place around us in Athens at the same time due to documenta14. Actions can be much more poignant as they are in a way staged and directed to have a specific message. Artworks allow a sense of flexibility in their interpretation and we wanted to give out a specific message, hence we dropped this exhibition format.

All the actions pointed at the crisis in Europe right now, whether this is an identity crisis or an economic crisis. The Biennale’s press conference included speeches from the five curators, who appeared in pirate costumes. It was preceded by a sound intervention Europa Clock by Dimitri Desyllas, which was performed from the façade out onto Omonoia Square, and was followed by Invasive Pests, a culinary action by The Domestic Godless in which strange food – like moss brownies and crispy fried fish bones were offered to visitors. 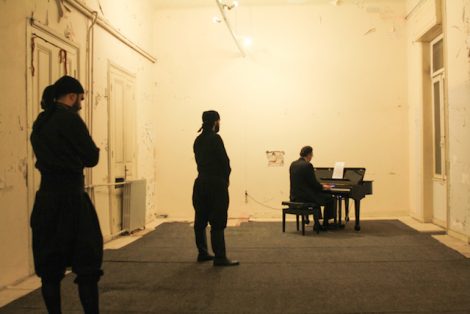 On the third floor of our venue, a solitary pianist, Nikos Laaris, played a single phase of “Ode to Joy” – the Anthem of the European Council – durationally on repeat. The Bageion abandoned hotel was opened up throughout the evening and for the two weeks that followed, inviting visitors to wander through three stories of empty rooms.

Finally, how should we respond to the call for a year of Active Waiting?

Active Waiting will culminate with the exhibition Waiting for the Barbarians in April 2018. During the year we will be actively thinking, sharing ideas, working theoretically and using digital platforms whilst at the same time preparing for the exhibition.