London College of Communication participants of the MA Graphic Media Design course recently launched ‘A Line Which Forms A Volume’, a new critical reader of design research edited, designed and published by the students.

‘A Line Which Forms a Volume’ is a new publication from the MA Graphic Media Design (MAGMD) programme at LCC. The small book brings together writing and research from course participants, tutors and guest critics, on a range of diverse, fascinating and often surprising subjects. The title is a metaphor for the different elements which make up design research and uses a line to symbolise different lines of inquiry into new areas of research.After launching at a symposium in December last year, the publication has since received considerable interest, with recent interview features by Grafik magazine and AIGA Eye on Design, and only 60 copies remaining from the 750 books printed. 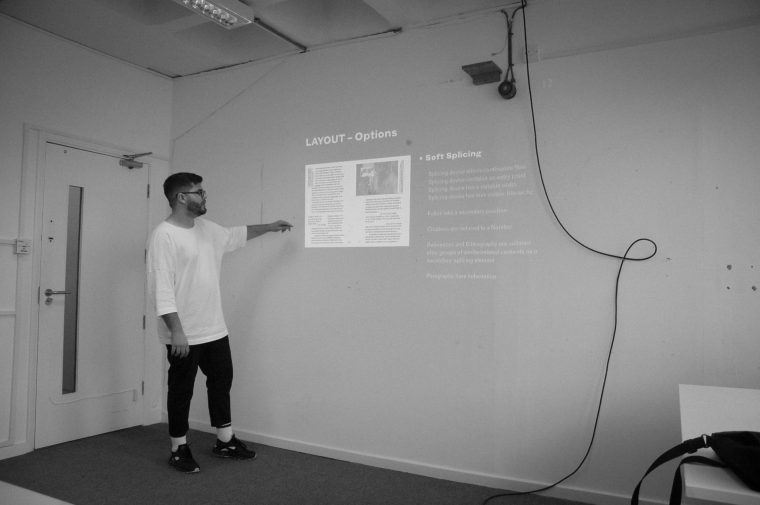 Paul Bailey, the MA Graphic Media Design Course Leader, said: “When developing the course design, which launched in October 2015, we saw an opportunity to position writing as a critical visual research tool that operates as an interface between thought and action, theory and practice, the individual and the public.

“We’ve been impressed with the participants engagement and it felt like the right time to establish a space to collectively publish their writing, as we had been doing with their practical design outputs. It was through discussions with course tutor, Bryony Quinn, we came to the decision to explore strategies to make design research public—to make it voluble—to make a volume.”

The motivation to initiate ‘A Line Which Forms a Volume’ felt like a natural progression for the course following series of events and activities exploring the role of writing through design education and practice. At the invitation of the Graphic Design Educators’ Network (GDEN), the MAGMD course curated and hosted With a Shift Simultaneous Realities Collide in March 2017. 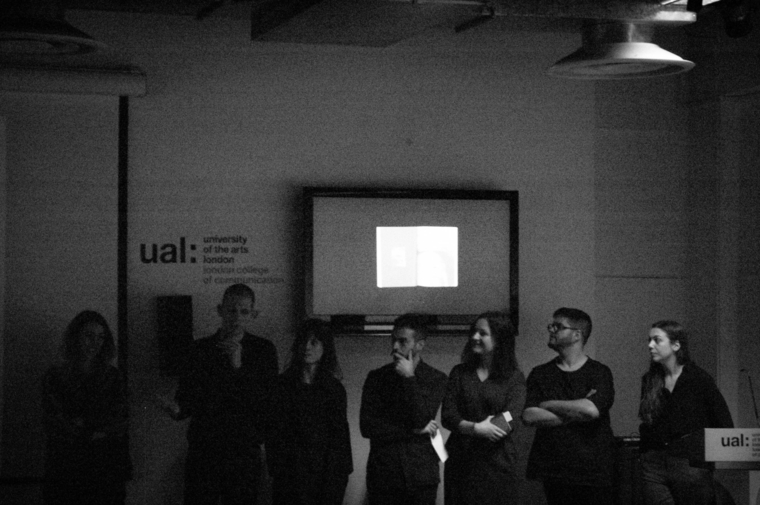 MAGMD participants speaking at the symposium

In May 2016, course tutors Sophie Demay and Paul Bailey, and MAGMD participants were invited to contribute to the Designing Writing symposium curated by Alexandru Balgiu at ECAL, Switzerland. The contribution performed vignettes of research concerned with the visual essay as a site of critical enquiry in design, departing from the words and sounds of Virginia Woolf.

A follow-up extension of this event, authored collaboratively by MAGMD participants, is due for publication in étapes magazine later this year. This line of research will continue in the coming months at LCC through a series of events co-ordinated by Sophie Demay, Paul Bailey and guests.

The course invites the participants to explore forms, modes and contexts of writing that adhere to the priorities of their design-oriented research provoking outputs as varied as visual essays, critical texts, poems, articles, biographies, scripts, games and more.

We caught up with Katherine Evans and Gabriela Matuszyk, who edited the publication, to find out more… 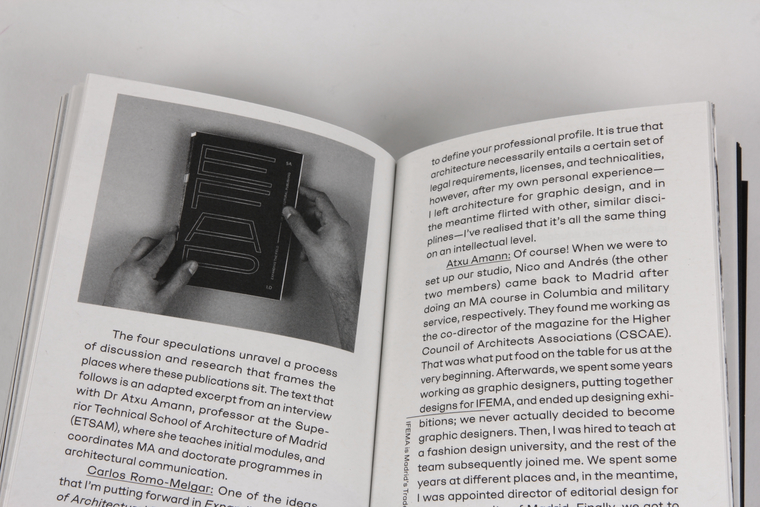 ‘A Line Which Forms A Volume’ inside spread

Congratulations, how does it feel to launch the book?

Katherine: It feels very exciting that it’s out there now. It was launched at the symposium last December and we really used it as an extension of the publication format. A Line Which Forms A Volume includes student research and situates it within the wider design practice. We used this format in the symposium as well and it has been really positive to see that its still gaining recognition since the launch.

Gabriela: Since publishing we’ve been interviewed by Grafik magazine, AIGA Eye on Design and it meant that we did not stay within an academic bubble, so it has had a wider reach. It’s really great to see it all come together and how it has moved on from the symposium.

What is A Line Which Forms A Volume about?

Gabriela: The book is an attempt to make current research public and opening it up from the academic place into the wider research led inquiry. It’s a way of showing our design and a look at our research within a number of different themes. We wanted to make sure that by editing we weren’t simplifying anything. We tried our best to tackle important subjects within a short written form. 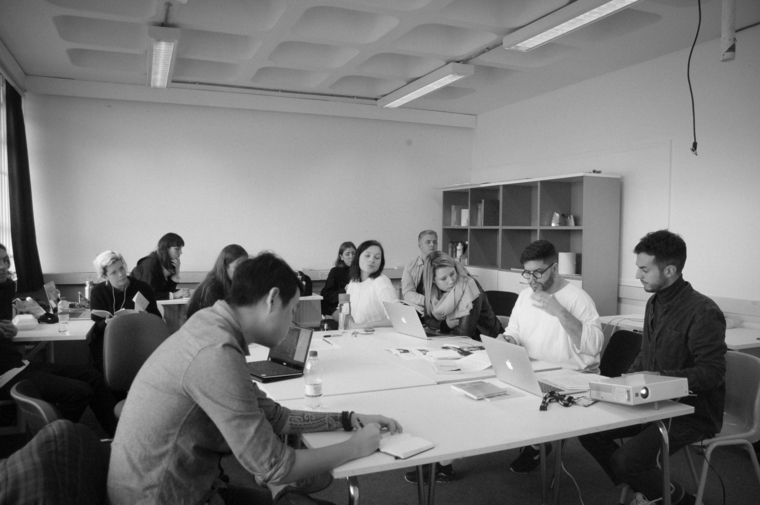 Team meeting for ‘A Line Which Forms A Volume’.

How many students were involved in putting together the book and how many contributors are there?

Gabriela: There were around 13 people on the three teams and roughly 22 contributors. Paul Bailey, Course Leader for MA Graphic Media Design, and Lecturer on the course, Bryony Quinn, initiated the idea and submissions were optional.

Were you involved in the design aspect of the book?

Katherine: We had a team specifically for design but the whole process was really democratic. As students on the part-time course, we were only here for one day a week so would meet at lunch with the different teams and present to them our ideas and put it to a vote. After the vote, things moved on very quickly and we would immediately put into action the recommendations made by other teams.

Gabriela: There had to be an element of trust between the teams, which is really important as I had never edited a publication before. I usually work as a graphic designer designing publications, so for me to take a step back from the design process and work with other people on that was a huge learning curve and worthwhile experience. 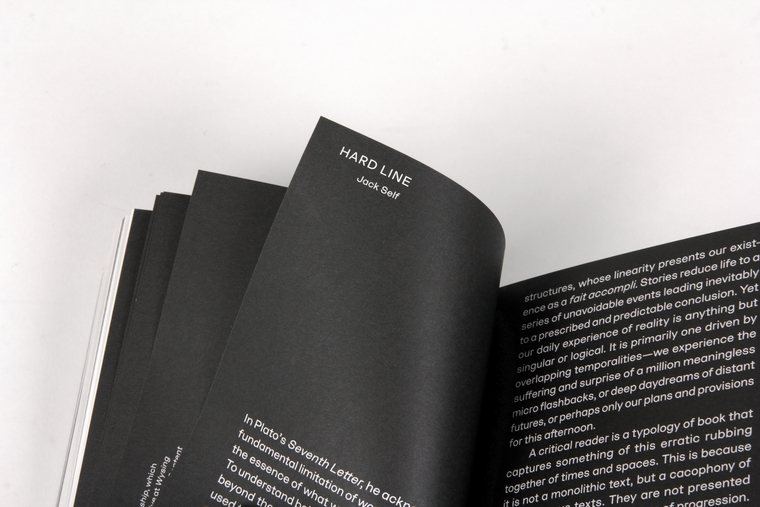 How does this book tie in to your MA programme?

Katherine: Although it did not form part of an assessment, it was in line with our MA programme and helped us to put some of our ideas in to practice and we learnt to collaborate with people from the full-time course. As the book came about towards the end of people’s courses, many treated the publication as an extension and reflection of their own projects and research and others further explored the ideas they had been researching.

Gabriela: Our role in putting together the book was as editors and there were three main teams for students involved in putting A Line Which Forms A Volume together. The teams were made up of design, editorial and symposium, who organised it all from conception to contacting people that we hoped to attend.

Did you find it difficult or did you enjoy yourself?

Gabriela: We really enjoyed it because we weren’t coming from a design background. It was quite a symbiotic process and there was a lot of communication between us. Other teams would offer their input and we would go off of that and it replicated a real life process of putting together a publication. 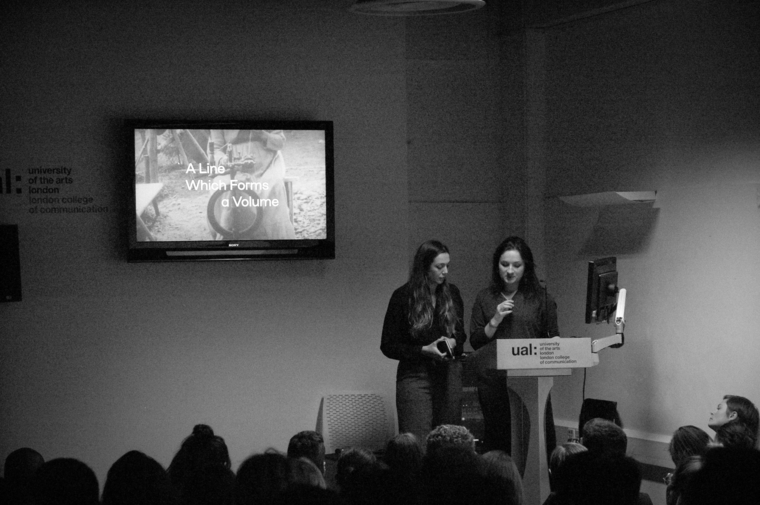 Has this process inspired you to do something like this in the future?

We will be launching a second issue of the publication in December but our roles will shift.

What’s been the greatest highlight of putting together A Line Which Forms A Volume?

Gabriela: In certain ways, it was an ideal environment as it was a collaborative process. There wasn’t any element of competition, which translated well as everyone had a shared goal and respected each other’s opinions.

Has this opportunity has prepared you for future employment?

Katherine: The experience has definitely opened me up to different opportunities as I had experience in design. Now though, I am considering roles that include writing and editing within the design process. 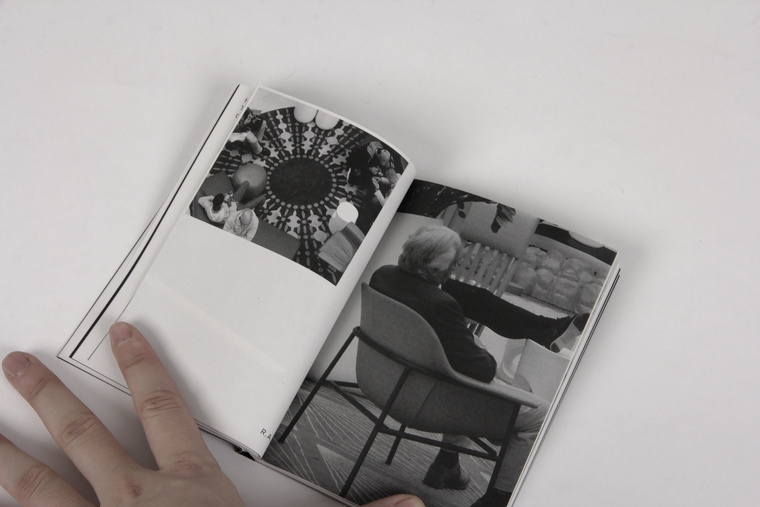 Inside spread taken from ‘A Line Which Forms A Volume’.

What’s been the greatest challenge of it all?

Katherine: The collaboration was between part-time and full-time students. This meant we weren’t aware of everyone’s strengths and weaknesses in the way that you might if you are on the same course and have worked together before. So looking at it from that perspective, if we had done anything differently, we could have found people’s strengths and then assigned people to tasks.

Gabriela: We had only nine weeks to put it all together from the moment of conceiving our idea to having the physical object. For half of that time we did not have any content to work with as people were still putting their projects together and still writing. This is something we are seeking to address with Issue 2. Another thing we are looking into is how we can bring in the new full-time course students into the next issue as well as different forms of publishing each month.

What else have you been up to whilst studying at LCC?

Katherine: Gabriela and I recently attended Beyond Change, a Swiss Design Network Summit in Switzerland. We will be writing a piece and blog post about our experience there. A number of big questions and key issues were raised at the conference that we hope to unpack through our report.

Learn more about the LCC Design School and its courses