As Degree Show Two: Design continues, we take a look the themes which have emerged from the diverse range of works on view this year.

The relationship between man and nature is a constantly evolving and necessarily interrelated one – often bridged by technology. At Degree Show Two: Design this year, these strands have come together in a multiplicity of ways. At its most fundamental this includes the incorporation of natural materials and processes into the production of fabric, consumable goods, ceramics, jewellery and design solutions, harnessing nature as material. Extending beyond this, students have examined the dynamic between man and nature, our control over but it also its control over us. The theme that emerged from the Degree Show was therefore twofold: of human action attempting to influence and augment the natural, but also the innate, overpowering controlling essence of nature. 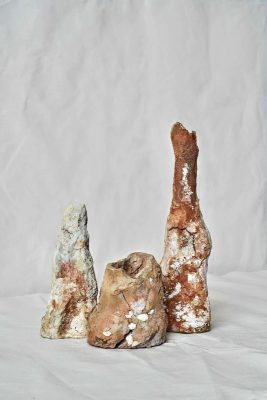 Aurore Piette, Marecreo: Made by Nature, 2018

MA Material Futures graduate Aurore Piette considers herself an apprentice of a new natural craft atelier, rising against the industrial way of production and instead adopting a new vision of making – with organic systems and natural energy. In the Meschers-sur-Gironde estuary in France, every tide deposits a new layer of sedimentary material on the seabed. Marecreo: Made by Nature is a series of objects which Piette has created by capitalising on this process. By working with this natural production process, she developed a collection of mud, limestone and sand-cast vessels. In her own words: “More than a making journey, these objects are symbols of humans and nature coexisting, a reaction to the current production system and a tribute to the origin and qualities of natural materials and elements. Ultimately, Marecreo is a proposition of a new utopian and transparent vision of what making could be in the future.”

Due to the nature of the course, MA Material Futures students often grapple with the relationship between nature and technology – both influencing and responding to natural processes. This year’s Material Futures Degree Show encompassed projects which proposed a new “natural” harvesting kit for ants to be used in healthcare, a ritual devised to bring humans and stones closer and explore the potential impact of commercial space travel on our bones and spine. 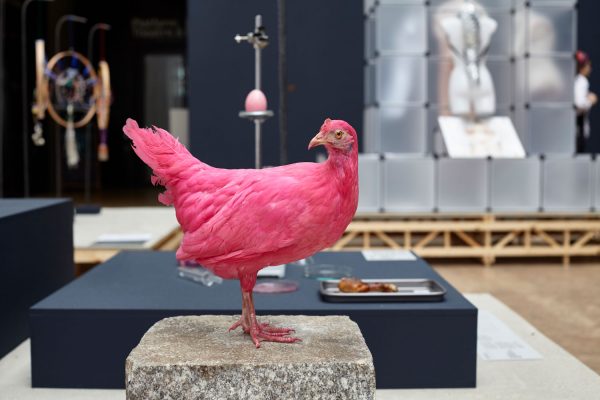 In contrast to Piette’s project, which utilises pre-existing natural actions, fellow course mate Linnea Våglund’s Pink Chicken Project examines the potential of changing an entire species. The chicken is the world’s most common bird. Every year we kill and eat 60 billion chickens – the bones of which leave a distinct trace on the Earth’s crust. This is a significant indicator of the new geological age – the Anthropocene. To reframe this identifier, Våglund’s project proposes genetically modifying chickens with pink bones and feathers using a gene from the insect cochineal which produces a pigment that fossilises when combined with the calcium of the bone. Spreading this gene with the newly invented CRISPR DNA editing technique, the species could be altered on a global scale in just a few years. The project rejects the current violence inflicted upon the non-human world but is itself an act of violence through modification. It poses questions on the impact and power of synthetic biology and gene drives while using the very same techniques to formulate the critique. Våglund’s seemingly “nihilistic” action instigates public debate around ecological discourse. 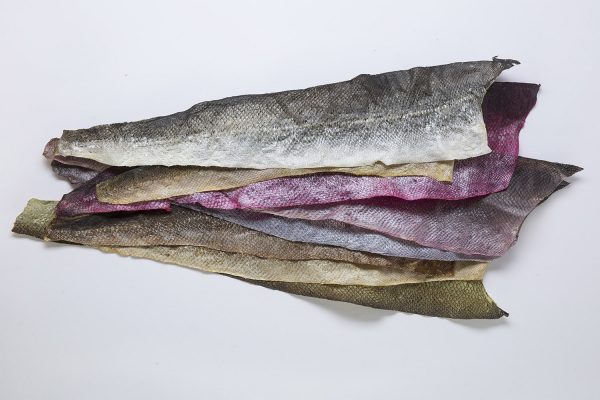 Also tackling this dichotomy from a material angle is Andrea Liu from BA Textile Design. Liu’s textiles are produced by tanning salmon skin – an experimental process which is sustainable and chemical free. While this is a project driven by turning waste into a material of value, Liu is also interested in narrative-based textiles. Inspired by ganseys – distinctive woollen jumpers worn by fishermen – her designs focus on the importance of preservation, using textiles to protect knowledge and memories on the verge of being forgotten. Here, human action is utilised in order to re-image and re-value a natural material. 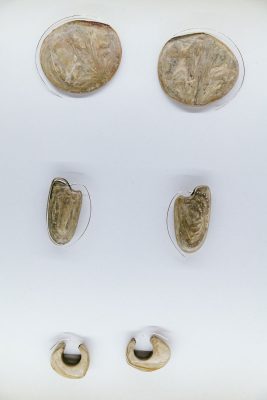 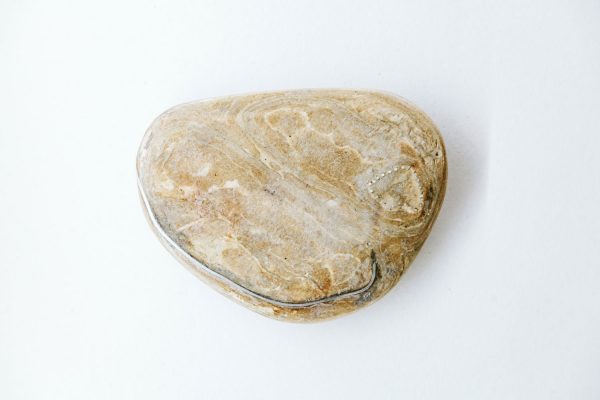 Rather than adapting a natural material through man-made processes, BA Jewellery Design graduate Matilde Mozzanega has used layers of industrial cardboard tubing, transforming it into organic forms. In a kind of reversed alchemy that uses resin, her work creates a state-change; the end-product is an entirely new substance. Pitting nature against machine, she hardens paper so that it feels like rock yet looks like driftwood. By breaking down the industrial structure, the material begins to return to its original form. Mozzanega’s collection was one of five winning projects at the inaugural Maison/0 Green Trail. 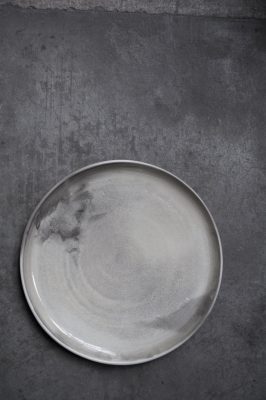 BA Ceramic Design student Simon Kidd’s project Sliabh Dónairt & Dregish is deeply influenced by his childhood in Northern Ireland. Growing up at the end of the conflict, his recollections are mostly of beautiful landscapes – “bomb scares and helicopters were merely a distant memory.” Evoking a sense of what it means to be Northern Irish, Kid’s ceramic objects are embedded with natural materials and processes: “For all of my pieces I have incorporated either a material or a process that is connected to a location. The Ground pieces in the Sliabh Dónairt range incorporate waste granite collected from the area surrounding a quarry on the side of the mountain. I collect this granite by hand before it gets calcined in a kiln. This process breaks down the bonds within the stones and allows it to then be ground down by hand into a fine grit. The ground granite is wedged into a porcelain clay body before being thrown into bowls on the potters wheel. Once fired, the different materials which make up the granite melt and bleed into the glaze on the interior or melt out and bead on the unglazed exterior. The granite becomes a fundamental part of the piece, and therefore the work is forever tied to the location.” 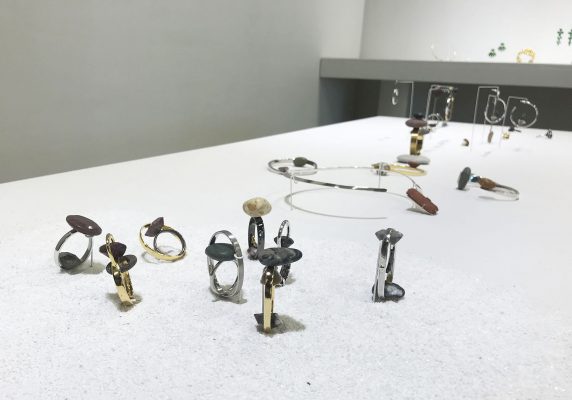 Kidd’s pieces are a symbol of the control of nature over our actions and decisions; he relies on the unpredictability of natural objects and processes to imprint and alter his own creations. Similarly, MA Design: Jewellery student Neung Wi Kim’s final collection Samrimryok incorporates pebbles and stones collected from beaches she has visited – relying on their unique character to create a jewellery collection. The project title translates as an “immersion of self within nature”. Using the meditative symbolism of the beach environment, Neung Wi’s collection is an attempt to translate past experiences of nature into object forms. Neung Wi exploits sensations of touch and the qualities of unique hand-cut stones to create wearable icons, and reminders, of wellbeing and restfulness.

Encompassing a range of positions on the potential for relationships between man and nature, our 2018 graduating design students tackled the theme with agency and responsibility for the future.