Hannah Rickards on her work and winning the Philip Leverhulme Prize

Hannah Rickards is a successful artist and a lecturer in Fine Art at CSM. We spoke to her about her artistic practice, the work she’s been doing with skycams at EMPAC in New York, and how CSM has changed since she was a student here in the early 2000s.

After winning the Max Mara Art Prize For Women in 2007, Hannah was awarded the Philip Leverhulme Prize last year and given a two year sabbatical with funding to work on her own projects and research.

Congratulations on being awarded the Philip Leverhulme Prize. What are you planning on working on for the next two years?

I have plans for the first year and then we’ll see what happens with the second year. At the moment I’m working on a new piece that I’m creating at the Experimental Media and Performing Arts Center, which is in upstate New York in a town called Troy. Between now and September I’m back and forth between here and there working with performers I worked with before previously, but rehearsing with them here. As well as that kind of project that’s happening here, there’s also research trips I’m taking to go to Vancouver and the Banff Centre in the summer.

Can you tell us a bit more about the piece you’re working on at the moment?

It’s hard to describe, but it’s essentially a piece of choreography for two dancers and a camera. The camera in this case is within a studio at EMPAC. It’s like the cameras you might see over a tennis or football match. It’s on four cables and can be moved to any point within the volume of the space and flown by these cables. It’s work that involves the movement of that camera in relation to the movement of two performers, who I’ve worked with previously on my work Grey light. Left and right back, high up, two small windows (2014). They’re interacting with a set of images and objects that have in some ways to do with navigation, geology, how one navigates through space. And how that form of navigation might relation to a process of musical composition, how you might put marks down on a page and how that relates to movement. 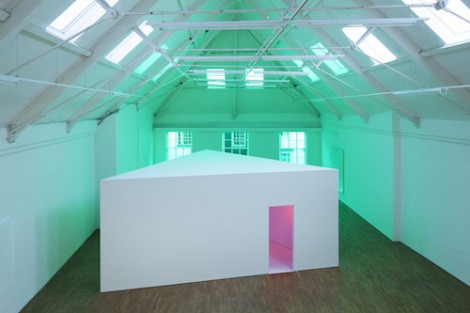 Installation view, To enable me to fix my attention on any one of these symbols I was to imagine that I was looking at the colours as I might see them on a moving picture screen., Modern Art Oxford, 2014 (photo: Andy Stagg)

Has winning the Philip Leverhulme Prize changed the way you work at all now you no longer have some of the usual financial and temporal constraints?

Yes, it makes everything easier. I tend to work quite slowly and I work on projects for a long period of time. That was partly because I had to, because in terms of fitting my two commitments together that was how it had to happen. Production had to happen at particular times of year, so work had to happen in pieces. Now it’s great to have far more focused time. In a way it’s interesting because there’s nowhere to hide, there’s a sense in which there was room – if you were in the wrong frame of mind making work – of thinking ‘I should probably answer that email’ or something like that. It’s interesting now being in a place where you just get on with it.

Is there pressure in that because you feel you have to do something?

At the moment I am making something and I know what I need to do and I’m really enjoying the process of making the work. I know if I’d just been dropped in the middle of nowhere that’s different to the position I’m in now. Making work can always be a little bit ‘what’s going on here, what are you making, what is this?’, there’s always that side of it, but I don’t feel stressed out by having to do something. That’s what I wanted to happen.

Do you have free rein to work?

Yes, to pursue my research, which in my case is my practice, but also useful research trips, which help me create new pieces of work. I guess an important thing is it gives me the possibility to travel a lot and through that strike upon possible future collaborations.

How would you describe your work?

It’s difficult because quite a lot of my work is about the difficulty of describing things, so if you like there’s an added layer of difficulty in actually describing the work. It often take the form of installations both sound and moving image based installations, and those commonly have a relationship to language in some way, but I think it’s difficult to describe an entirety of what my work is like. It’s also changing quite a lot at the moment.

Do you like to keep your work and teaching separate?

I think in general terms they’re quite separate, but I think it’s not quite as straightforward as that. Generally when you’re engaged in conversations with colleagues and students it’s part of your thought process and what’s going on.

You once studied at CSM too – how was transitioning from being a student to a member of staff? What’s changed here through your eyes?

Obviously there have been very evident, big changes in that time, like this new building, but when it comes down to what happens here, not very much has changed: and I don’t mean that in a negative way, at all, the place is still full of energetic, interesting students who are trying to figure out what they think about the world. That doesn’t change. That kind of continuity is really great. It’s a different building, a different set of circumstances, but actually, there’s a through-line of imaginative, energised human beings who want to do things walking through those doors.