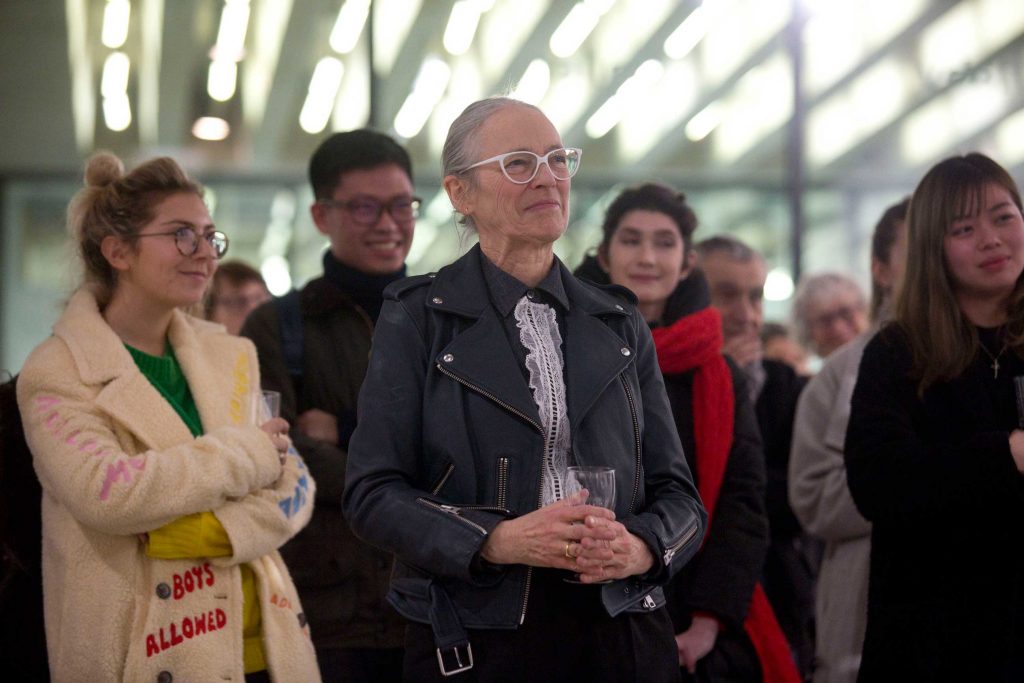 Over 100 pieces are brought together to share a career that began with jewellery but spans installation, performance, sculpture, textiles and photography. To have such a collection in one space emphasises not only Caroline’s continued cross-disciplinary dexterity but also how the tactile object, the contact between body and thing, has remained central. Caroline retired last year after nearly a decade as Programme Director of Jewellery & Textiles and Course Leader of BA Jewellery Design, though she continues to be part of the College life as Professor Emerita.

“We think this is the first time the Lethaby Gallery has been given over to a single person and I can’t think of anyone better to bestow that honour on than our Professor Emerita Caroline Broadhead,” said Jeremy Till, head of College. He spoke of the breadth and brilliance of the work on show, continuing, “Caroline’s work defies any sense of categorisation. It is a body of work which transcends any label and approaches established paradigms with sly humour and irreverence. I’d like to think those qualities of being manifest by our students.”

“Caroline gave me the permission to step outside those perceived boundaries of my discipline. Nobody had given that to me before. It was ok to think handmade, to make something that didn’t have a perceived function, it was ok to have a narrative, to challenge, to be quiet… I would like to thank you on behalf of all those students sitting in art schools across the world that you will never meet, that you have had an influence on. The threads that run through this work join us all together in ways we don’t know and cannot imagine.”

Here we share a few pieces from the exhibition alongside the artist’s words. Windows form frames through which we view the world. The tradition of hanging net curtains at the windows interferes with this two-way exchange of looking out and looking in, controlling curiosity and privacy and interrupting the gaze onto the screen of fabric. Where I live and work in north London, most windows have net curtains. These conform to a certain social convention and are primarily for privacy, but looking through windows at the end of the day when the light is fading and people have turned their lights on inside, you feel compelled to look inside and everything that was intended to be shielded by the curtains is lit up and in full view. The idea of this piece was to create a spectacle of the very thing that is meant to deny one. 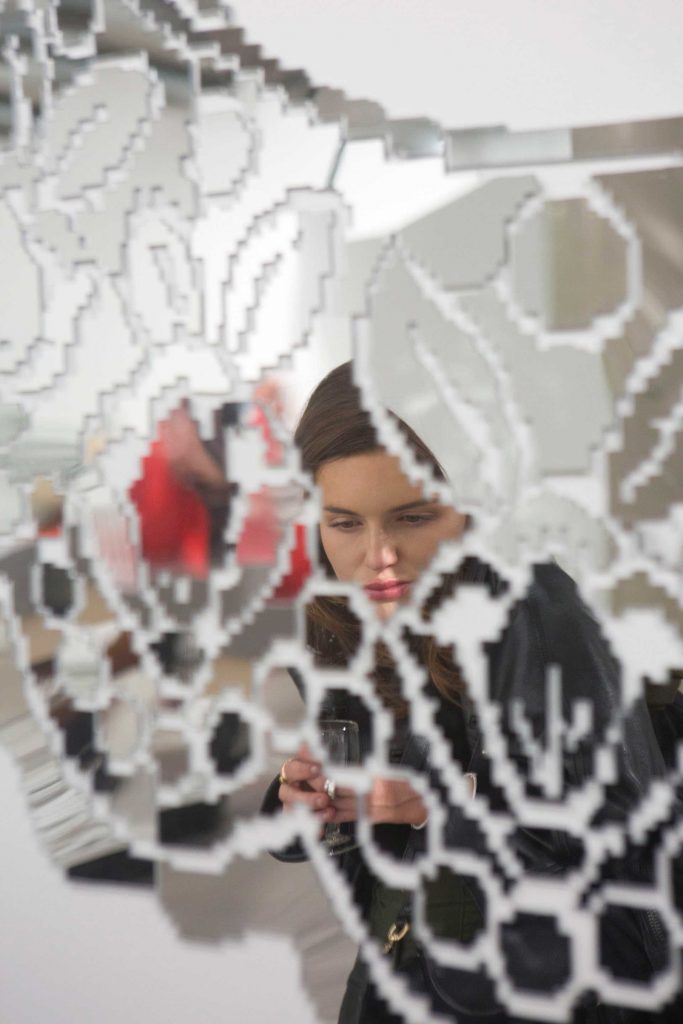 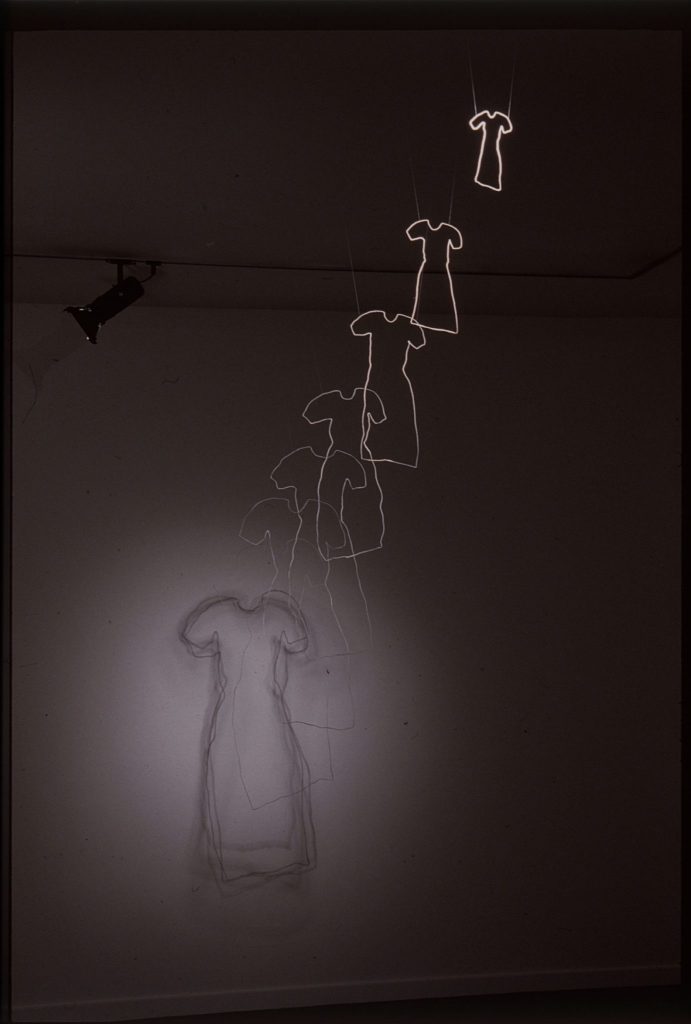 I was exploring a privileged point of view. From most positions the view is a three dimensional one with a sense of space but the view from one specific position offers the illusion of the lines suddenly forming a flattened frame around the dress. 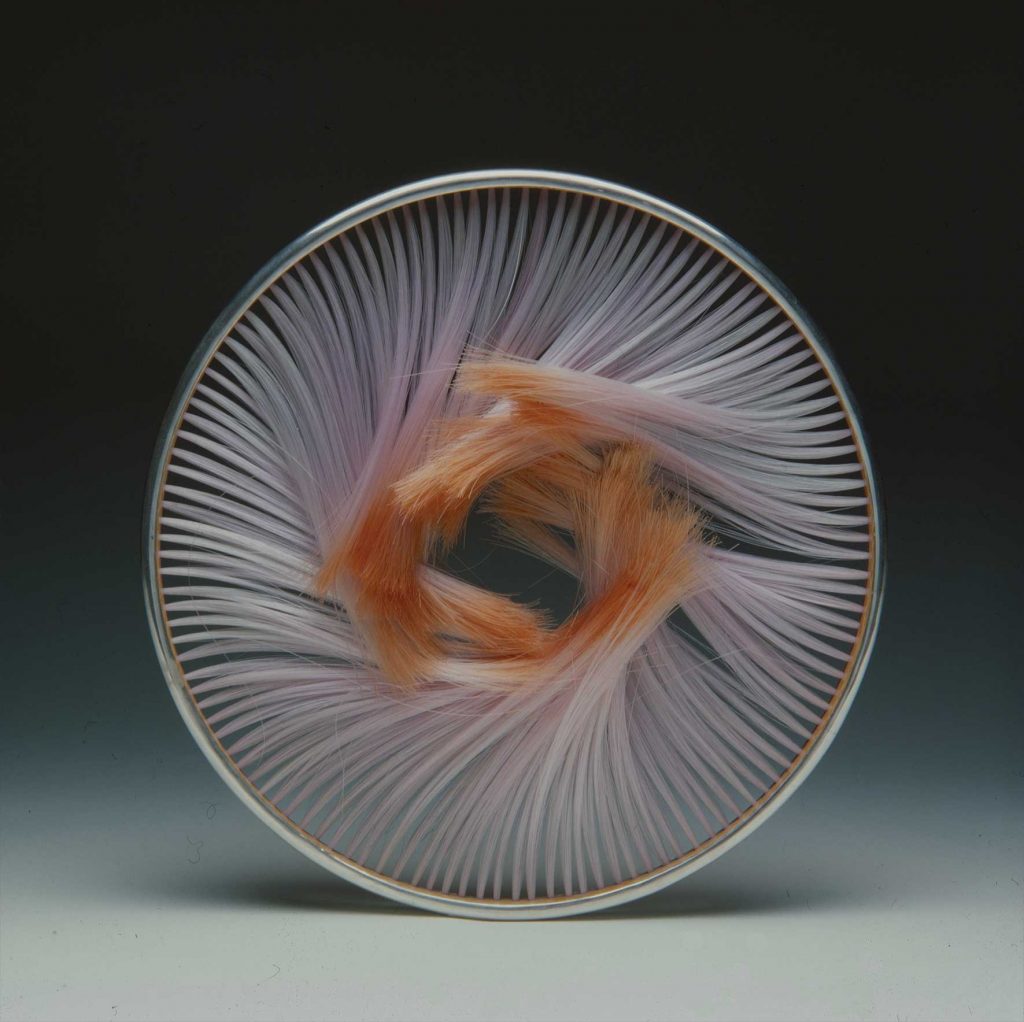 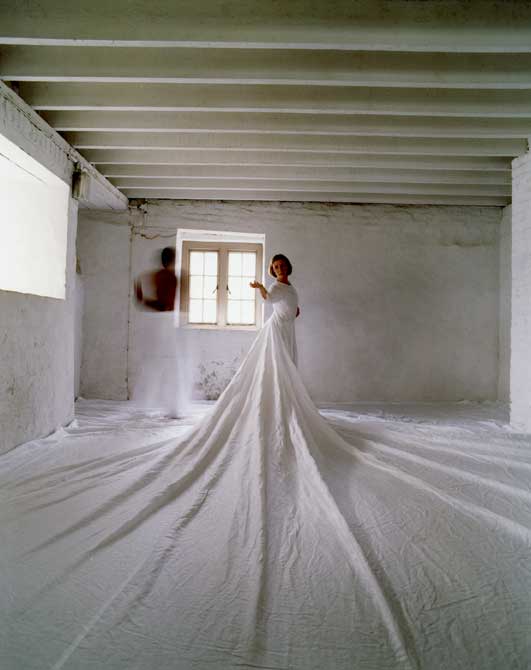 The Waiting Game, in collaboration with Angela Woodhouse, 1997

The Waiting Game was a promenade performance in the small garrison of Upnor Castle, on the River Medway, Kent, which played a part in the Dutch Raid in 1667. The white dress was inspired by the idea of an unrecorded female presence; women who had to work there quietly, tethered to the building. The audience came down the steps into the room and had to tread on the dancer’s dress, which allowed her to move in a particular way, to pull away. The audience acted as both an anchor and invader and as such became an integral part of the dance. The idea of trespassing on the dancer’s dress was to offer a personally felt experience, which could lead to a recognition of how larger and more dangerous conflicts arise.