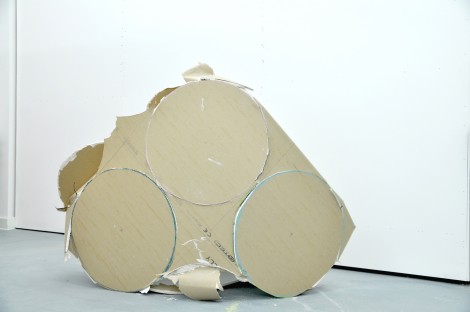 We spoke to current ‘We Are Open’ artist in-residence, BA Fine Art alumna, Asta Meldal Lynge about the concept of an architectural image, the phenomenon of computer-generated images, experimenting with hydrographic printing and her upcoming publication Real state.

So tell us a bit about your project for We Are Open.

Essentially it is building on an on-going investigation into the architectural image – the phenomenon of the rendering. I am particularly intrigued by how these computer generated images you see on boards used to cover construction sites stand as predictions for the future whilst hiding whatever is happening behind them, be it a big hole in the ground or a grand palace. They have become such a dominant feature of the city and I have been thinking a lot about the relationship between the rendering that predicts whatever is going to be built and the physical space that is actually built.

What first inspired you to start examining these images?

A lot of my work is about where the image is, where it exists and on what conditions. There is a book by Hal Foster called The Art-Architecture Complex, where he amongst other things talks about building contra image. This idea of an image architecture comes up which I think is quite appropriate for a city like London. There are a lot of towers that are being built that seem to aspire to resemble images. They have to have a certain shape or a feature that distinguishes them as icons. The shape of buildings is so important; it is almost like the priority is to build something as an image rather than a three-dimensional space.

In my last year of CSM, which was the first year at the new campus, I spent a lot of time walking up and down the King’s Cross Boulevard. I was intrigued by this situation – walking from the station through what must have been the rubble of the old King’s Cross I noticed that perfume was being sprayed from pipes that were placed near the top of these green ‘hedge’ boards covering up the building sites. I think they were doing this to make it smell less like concrete.These boards covered in rendered images used to cover up construction sites are supposed to be temporary structures, but in my experience they are quite permanent things. Once a section is taken down new ones pop-up across the road.

But, to go back to this idea of the architectural rendering – what I find interesting is that most often these images are made without the use of a camera. There is no direct indexical relationship between the image created – the rendering – and the world. These images that, in a way, are produced without any connection to the world, become so physical and so present. 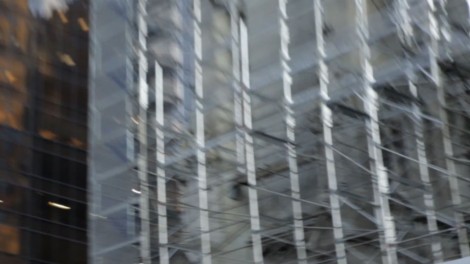 Is this something that has influenced your work previously?

Yes, it has been a recurring theme throughout a lot of my work. When I graduated from CSM I made a film about lobbies because I thought that was one of the only spaces that was actually more of an image than an actual space. A lobby is meant to signify lots of things to the guests or visitors. It is very much an artificial, curated space. I think a lot of my video work, which I’ll be screening on Thursday during my residency, revolves around the facades of buildings and balances between surface abstraction and object representation.

How are you planning to use the gallery space during your residency?

A big part of my residency will be focused on the production of a series of sculptures made of walls – plasterboard, which is this very cheap material that is used a lot in construction. Plasterboard only really became popular with the need for cheap and fast housing after WWII, which I think is really interesting. It is quite an unforgiving material because the moment you get it wet it is not very functional and it is categorized as a hazardous waste because you can’t recycle it, yet we see it being used everywhere.

I will also be doing some hydrographic printing, a technique used to distribute an image onto a 3D object. There are some really amazing Youtube videos that show people doing it; it is quite satisfying to watch. I haven’t used it before, but I am very excited about it, it’ll be a really fun experiment.

Do you have any events or performances planned?

I have invited an artist, Adam Gallagher, to come and do a performance on Friday, 29 January. Adam creates these situations that are tailored to the given place or space, bringing together things that would never otherwise have met; a Tesco’s Finest Sirloin steak and a block of marble for instance, or a bottle of Pepto Bismol with a bike light in it. I thought he could come up with something great. He knows the building and as a CSM graduate he has witnessed the changes happening in King’s Cross.

Is this your first experience of developing work in a public gallery?

I haven’t developed work in a public space before, but the studio I work in is open plan and shared with 7 other artists, so I am familiar to the sense that other people can see me working.

Though, when I first visited the gallery I thought about creating vinyls that would fill the windows in order to replicate that idea of an image façade building people’s expectations of what is happening inside. 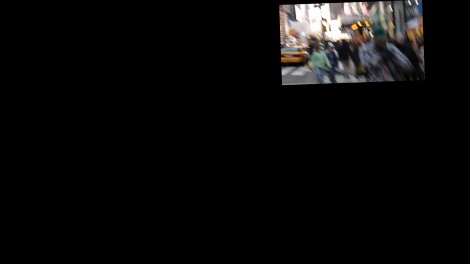 What do you hope people will take away from your work?

I’m not sure, perhaps that they will look at their surroundings in a different way and think about what it is made of, where it came from, how it got there and why it is there because that is what I am thinking about. It is not like I have an answer, I am just trying to ask questions and think openly about the presence of images, as they are such a huge part of society and so integrated into politics and economics. I want to create a situation within the gallery that will make people look and consider their environment more closely.

Do you have any upcoming projects that we should look out for?

I have been working on a publication that will be published by Studio Operative titled Real state with designer, Rory Gleeson, and a writer, Eleanor Ivory Weber. It is an examination of what happens between the lens of a camera and the surface of an object. In response to the recent ramification of the architectural rendering in an urban context, the book questions the territory of the image. Reflecting on the experience of a ‘global’ architecture the book will take a critical stance on the housing market, revealing the palpable effects of financial speculation on the built environment. We’ve been working on it for over a year and we are hoping to launch it on 25 February 2016. I am also part of a screening curated by Sharna Pax that is showing in March as part of Copenhagen Short Film Festival.

Catch Asta in the Lethaby Gallery all week as part of experimental exhibition ‘We Are Open’.