Bringing together six designers and one design collective, the Material Identities section of the exhibition explores how we use objects, images and garments to externalise and construct our identities. The designers in this category make material the human dimensions that are often hidden. From object to image, from the wearable to the watchable, they surface the invisible and confessional and counter stereotypes of gender, race and identity. 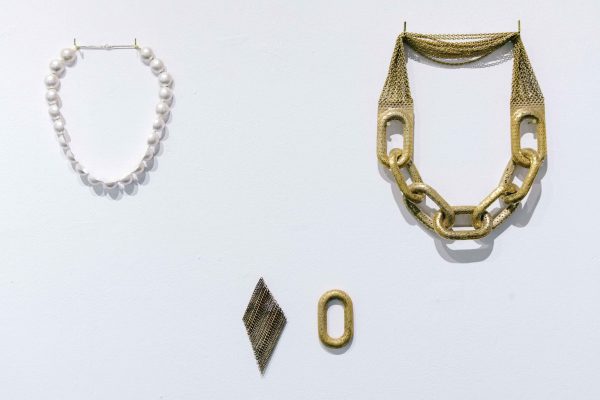 Veronika Fabian’s collection Chains for an average woman, examines a woman’s relationship to self-identity. It looks at how we form our personas within the cultural and economic conditions of contemporary society and the intense consumerism dominated by popular culture and mass media. BA Jewellery Design graduate Fabian has transformed industrially manufactured chains, creating a series of pieces, which each represent a different prescribed social role or female archetype. Fabian is interested in the complexities of female experience today. As she explains:

“In traditional, pre-modern societies the identity of the individual was solid and stable; it was a function of social roles to provide an indication of one’s place in the world. Identity was therefore fixed, determined in advance, independent of the acts and choices of the individual. In the modern era, the notion of identity became more mobile and subject to change — people began to construct their identities from a set of common social roles. These constructed identities set out for a renewed recognition and validation from society, often causing anxiety in the modern individual who could never be certain they have chosen the ‘right’ identity in a world of options.”

This process is especially complex for women: “Women have made huge advances in equality, widening the scope of potential roles that were previously restricted, making identity even more fragmented. While the mass media has a large influence on society, pattern seeking and stereotypes have become dominant, placing increased expectations on women.” Fabian’s collection won her the inaugural Unilever #Unstereotype Award, as part of the 2018 MullenLowe NOVA awards. 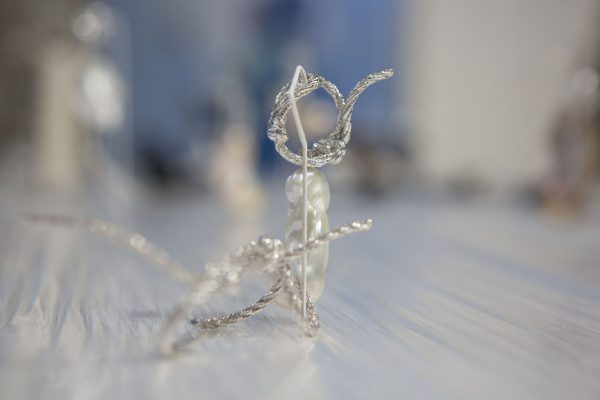 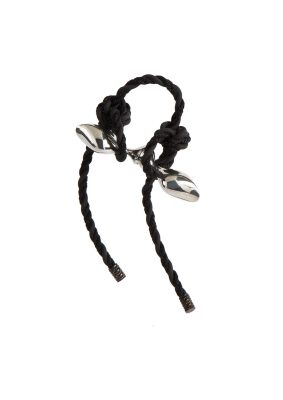 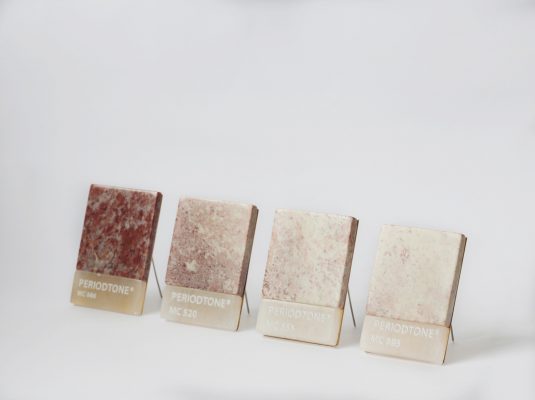 Ariel YC Tsai similarly uses jewellery to challenge taboos around a “gendered” subject. She has designed a set of brooches made from alabaster and pyrophyllite which mimic the colours of menstrual blood and tampons or pads. In contemporary society, we often create words and phrases to replace the word ‘period’, masking it with crude innuendo or analogy. Even advertising for sanitary products replaces the expected blood with an unknown, blue liquid. Tsai’s collection is an attempt to remove this stigma, producing symbols which can be worn to both incite discussion and denote the naturalness of menstruation. 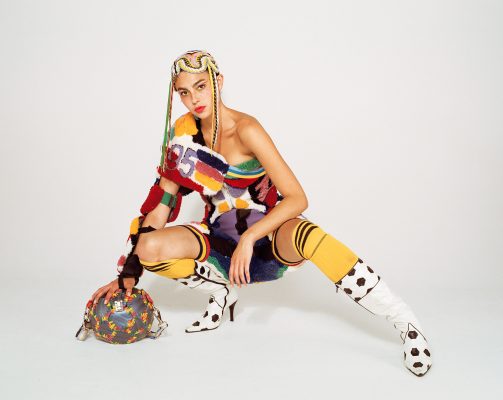 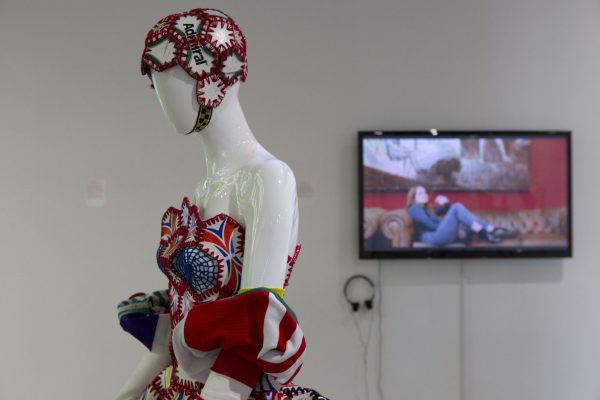 What we wear and adorn our bodies with is inextricably linked to the formation of “character” — these are typical, external signs of our tastes, our decisions and, often, our moods. Clothing or accessories can come to symbolise specific periods or eras in history as well as in our own lives. Paolina Russo’s fashion collection I Forgot Home is an ode to her own childhood, inspired by her recollections as a bored, hopeful, naive teenager in the suburbs of Markham, Canada. During her time at Central Saint Martins, Russo has developed a new lenticular knit technique — a process similar to two-way holographic images. The knitted image can only be seen from a certain angle and disappears when looked at straight on. Her collection combines this illusion technique with materials and objects reminiscent of the sports and craft culture she grew up around. Incorporating old athletic shoes, rugs, crotchet blankets and worn out footballs alongside technical fabrics, she juxtaposes symbols of domesticity, femininity and sports culture. Russo’s innovative collection was awarded the annual L’Oréal Professionel Young Talent Prize and she was also one of two runners-up at the 2018 MullenLowe NOVA Awards. 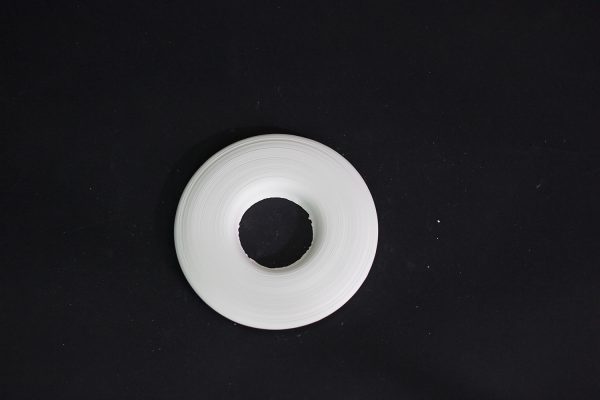 Anke Buchmann, This moment will never come back, 2018

While these designers craft that which adorns the body, BA Ceramic Design graduate Anke Buchmann uses the body itself as a tool. Working with ceramic objects and performance, she investigates how clay can help us be present in our own bodies. As a reaction to hectic, contemporary life, her project This moment will never come back brings our attention to the here and now. Buchmann synchronises her breath and gestures, creating circles as a representation of the present moment and encouraging a reconnection between the cognitive and the physical. For Creative Unions, she presents a series of circular, ceramic objects. Each clay circle matches the volume of a single breath — 420g. In isolation, each object is a physicalisation of a vital but invisible bodily process. Collected together, stacked on top of one another, they physicalise the passing of time, of the present moment and the past. 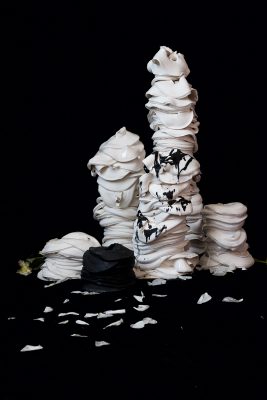 Anke Buchmann, This moment will never come back, 2018 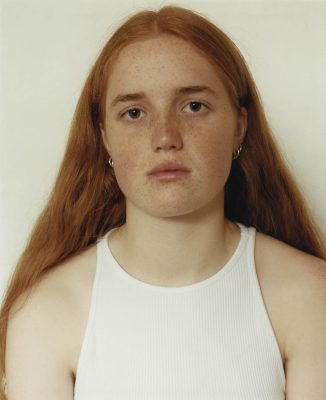 Photography and film also play a significant role in the construction of our external selves — a photograph or film of yourself is the documentation of your physicality. It allows you to see yourself, as well as present your ‘self’ to the world. The invention of photography transformed the way we picture and present ourselves, in its creation of the portable, compact, literal self-‘image’. Fashion Communication and Promotion graduate Julie Greve is the only designer to employ film for her work in the Material Identities category. Her work analyses female experience, memory and self representation. Using the conventions of portraiture and personal narrative, she focuses on girls who are transitioning from childhood to adulthood. Her works often stem from her own experiences and conversation with women of all ages. Her film Imaginations About Myself documents four young women as they recite stories, which are at once strange familiar — stories which crystallise those moments where they realise their own visibility in the world.

Creative Unions is on view in the Lethaby Gallery at Central Saint Martins until 27 October 2018.